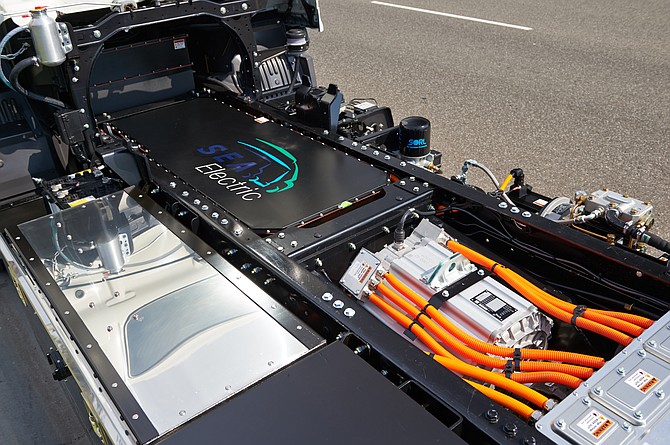 SEA's electrification tech can be used in a range of commercial vehicles.

“It all depends on the market conditions and our needs — we’ve got plenty of capital for the next 12 months, and we’re really focused on growth, and if the right opportunity presents itself, we will go for it,” said Mike Menyhart who joined SEA Electric as president for the Americas region in April.

The cash reserves Menyhart referred to include $42 million raised in April by SEA Electric, which makes electric power systems for commercial trucks and vans.

The funding round, which included Canadian electric motor company Exro Technologies Inc., brings SEA Electric’s total raised to date to about $75 million. The funds were earmarked for financing its backlog and facilitating more pilot programs with major truck fleet operators.

“We had eight institutional investors join our latest round, and we’re actually looking at bringing on a few more strategic investors as we prepare ourselves for the next phase of our growth,” he said.

SEA Electric, founded by Tony Fairweather in 2012, moved from Australia to Torrance in January 2020. It also opened an innovation center in Des Moines, Iowa, and plans to set up offices in Chicago, New York and Miami this year. The company has about 100 employees, with half of them working stateside.

“We knew we always wanted to go to the U.S. because they were one of the more progressive adopters (of EV technology) as well as the sheer size of the market and the opportunity,” Menyhart said.

“We purposely picked Torrance because it has become the U.S. EV capital … per se, and there would be access to talent and the right ecosystem to build the company,” he added.

The company packed its bags for the United States when the price of batteries powering its systems dropped below the $300-per-kilowatt threshold.

“We knew we would have a product that would be differentiated in the marketplace and proven and that we would be ready to compete in the U.S. marketplace,” he said.

The rest of the company’s revenue comes from electrifying used combustion-engine trucks and school buses.

“A lot of the costs associated with going electric in the school bus area is extremely significant when buying all new buses,” Menyhart said.

As an alternative to scrapping diesel-powered buses that are often five to seven years old and in good shape when they come off a lease, Menyhart said, SEA Electric provides a “means to accelerate the trend toward electrification as well as find secondary uses for assets that are extremely well constructed and American-made.”

SEA Electric outsources manufacturing to several companies, including Fontaine Modification Co. in North Carolina, Roush Enterprises Inc. in Michigan and Knapheide Manufacturing Co. in Illinois. Working with several firms provides the company with redundancy and the ability to scale production when needed.

“We are at a point now where we are running major trials with some of the world’s largest fleet operators — the UPS, Staples and FedExes. At the end of the day, those are the type of organizations that could very well put in three-, four- and five-digit orders, and we need to be able to show them how we would be able to support them,” he said.

SEA Electric is on schedule to deliver more than 1,000 electric commercial vehicles this year, according to the company, and to have more than 15,000 vehicles on the road by the end of 2023.

“We are in a growth mode, so we are not profitable,” Menyhart said. “We’re focused on growth, and we fully anticipate going down a path to becoming a public company in the next six to 12 months, and we expect to be profitable in 2023. … We have real revenues; we have real trucks on the road. The working capital requirements will be a little bit of a drag until 2023 when we become EBITDA positive.”