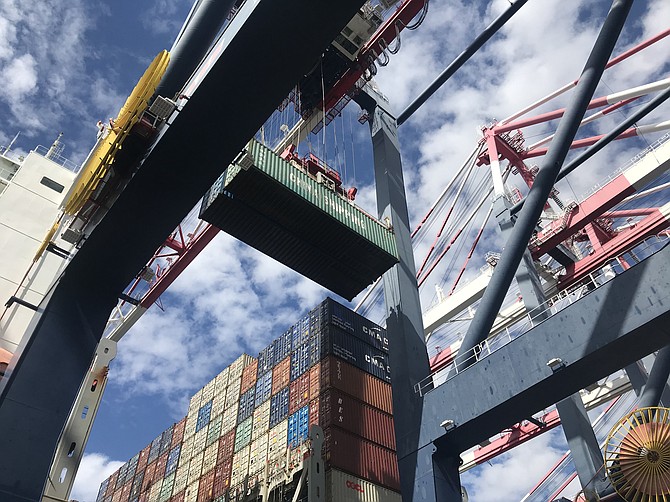 Outside competition has prompted the ports of Los Angeles and Long Beach to forge an alliance.

Threatened by a common adversary, the ports of Los Angeles and Long Beach have vowed to collaborate on several operational initiatives to preserve San Pedro Bay’s competitive edge.

Under a memorandum of understanding approved last month by their respective harbor commissions, the ports will team up for efforts designed to improve efficiency and enhance security.

“Our two ports are the fastest way to move goods between Asia and U.S. markets and manufacturers,” said Port of Long Beach Executive Director Mario Cordero. “The kind of cooperation that will flow from this agreement ensures we will continue to be the most efficient gateway for shippers.”

The ports are the two largest in the nation, handling approximately 37% of all waterborne goods entering the United States, and representing more than $312 billion in trade value. And while cargo volumes have been rising ― 2018 was a record-setting year ― the ports’ market share is shrinking.

“When I first started working here at the port in 2002, (the market share) was 42%,” Port of Los Angeles Deputy Executive Director Michael DiBernardo said during the harbor commission’s hearing on Feb. 20. “So, you can see that it has shifted, that cargo is going to other gateways.”

DiBernardo referred to East Coast ports which, anticipating the 2016 expansion of the Panama Canal, have improved their capacity and are picking up more cargo from Vietnam, India, Thailand and Indonesia as tariffs shift manufacturing away from China.

“Given our competitive situation that we’re in right now … we need to work together and collaborate to maximize service, maximize predictability of the cargo, cargo velocity and the whole scope of port operation,” Cordero said. “We’ve done such a great job on our environmental initiatives, so now the question is can we do that on the operational front, and the answer to that for me is yes.”

Under the new memorandum of understanding, the ports will work together on cargo movement efficiency, supply chain connectivity, workforce development and cybersecurity in order to lower costs for shippers, improve sustainability, business continuity and security. The staffs of the two ports will establish a work plan that will prioritize efforts, create work groups and define objectives for each of the areas outlined in the MOU.

For cargo transfer predictability, the work groups will look into enhancing gate velocity, which involves transfer of containers between terminal operators and trucks and railroads, and improving the availability and use of truck chassis in the gateway.

“We always have an issue with regard to unavailability of chassis,” Cordero said, adding that “truckers don’t just deal with six terminals at the Port of Long Beach” but with the entire complex, “and it behooves the ports to make sure that on an issue like chassis, we come together and see how we can maximize interoperability in terms of applying the proper resources and, at the very least, support and funding for the logistical answer to maximizing chassis durability.”

Improvements to supply chain connectivity will focus on adopting a “complex-wide information portal that provides stakeholders with a common access to information on cargo,” such as Port Optimizer used at the Port of L.A.

The ports will also push for a complex-wide appointment system to transfer containers between terminal operators, trucks and rail, according to the MOU.

Among working groups’ priorities are cybersecurity and establishing a workforce development program for International Longshore and Warehouse Union workers that will be displaced by automation at the ports.

The MOU also calls for “tracking of key performance indicators that show how well each port is doing to meet stakeholder needs for a fast, reliable and cost effective port gateway.”

The ports have implemented 26 similar agreements between 1981 and 2017, according to Geraldine Knatz, a professor at USC and former executive director at the Port of Los Angeles. Knatz said the dip in market share was inevitable as other ports invest in infrastructure.

“There was always the recognition that as these ports in other areas develop and expand, that they’re going to get a bigger share of the cargo,” she said. “L.A. and Long Beach, as long as they’re growing, that’s a very positive sign.”

The latest cargo volume data paints a somewhat grim picture ― the ports reported double-digit dips in cargo volumes for February as fallout of tariffs and Covid-19, caused by the new coronavirus, lingers on.

“As factory production in China remains at low levels, we expect soft volumes in March,” Port of Los Angeles Executive Director Gene Seroka said in a statement. “Looking ahead to anticipated manufacturing improvements, we will need to return empty containers to Asia and push lingering U.S. export boxes out swiftly. We’re actively working with our supply chain partners to be prepared for a cargo surge once production levels ramp up.”

Knatz said disruptors like tariffs and coronavirus “happen periodically, but if you look at the longer-term trend, these ports continue to grow, and they will.”

What’s important, Knatz added, is that “the issues that are detailed out in this MOU are going to (focus on) speed and reliability. Customers don’t want to hear about any cyber security incident that affects the port. They want to make sure there’s enough people there, too. And so it’s just the continued evolution of trying to keep the port reliable and be the best supply chain option for their customer base.”