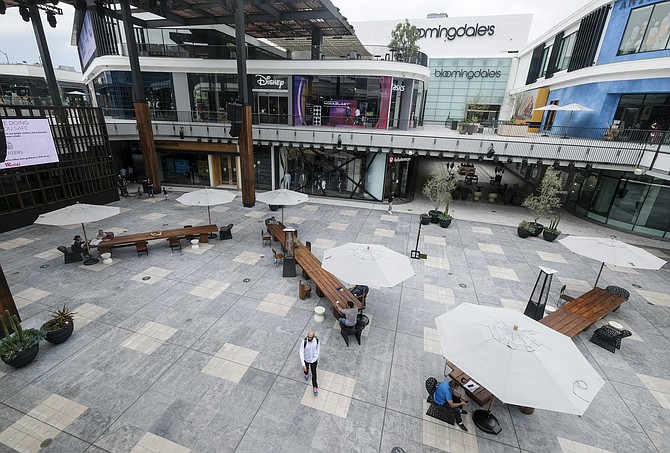 Almost a month after local shopping centers got a green light to reopen, about a quarter of their storefronts remain dark.

At Del Amo Fashion Center in Torrance, more than 80 stores and restaurants are shuttered while at Westfield Century City, 65 shops are still closed.

Foot traffic at the malls is also well below pre-coronavirus levels, but most of those who do come leave laden with shopping bags.

“It appears that there’s a pent-up demand,” said Ken Mason, general manager at the Puente Hills Mall, whose roster of open stores is at 70%. “There aren’t as many lookie-loos. People who come are actually shopping, and that’s a good thing. We anticipate things will improve as more people become more comfortable to go out.”

Sung Won Sohn, professor of economics at Loyola Marymount University, is not so hopeful — he said the economy is seeing a W-shaped recovery rather than a V-shaped one — and attributed the initial spending sprees to federal government stimulus checks.

Sohn also cautioned that there is still a lot of uncertainty regarding job security and the spread of Covid-19.

“People are afraid to go into stores and restaurants and talk to people face to face,” he said, adding that those who have been laid off are “worried whether there will be jobs for them to go back to. After the initial phase that we are seeing, I would expect sales to slow quite a bit.”

Beverly Center, whose tenants include luxury brands like Dolce & Gabbana and Gucci, welcomed guests starting on June 10 and is seeing “about 50% to 60% of normal traffic,” according to Jackie Plaza, the shopping center’s marketing and sponsorship director.

“We have about half our stores reopened at this point and expect that number to grow weekly over the next several weeks,” Plaza said.

Michael de Leon, who oversees operations at Burbank Town Center, said 91% of stores there are open, but he doesn’t expect traffic to pick up until the mall’s AMC movie theaters and Round One bowling alley and arcade are up and running.

“The consumers out there are still split ― you have some that feel it’s too early to come out and go into a mall, and there are those that say, ‘Yeah, we’re excited to be here,’” de Leon said. “But one of our biggest draws was the movie theater, so it’s not an apples-to-apples comparison.”

Sohn said the reasons why some retailers have not rushed to reopen are wide-ranging.

Some have laid off their workers, who are now receiving unemployment benefits that either match or exceed their weekly wages, giving them little motivation to return to their jobs.

Other retailers, Sohn said, are receiving rent deferrals, so reopening may signal to the landlord that they are ready to resume paying rent.

For mall owners, operating below capacity is not sustainable in the long run. Sohn said rent deferments help keep the tenants in the stores, as the probability of “getting another tenant is not very high. And, also, that new tenant would probably ask for substantially lower rent.”

Then there’s the threat of potential lawsuits — opening a store during a pandemic calls for extensive preparations to accommodate social distancing. Some retailers are “concerned that if someone comes into a store and claims that you didn’t prepare properly therefore they got coronavirus and you could be sued,” Sohn said.

Source: Data compiled from the individual malls as of June 24, 2020. *Approximate number