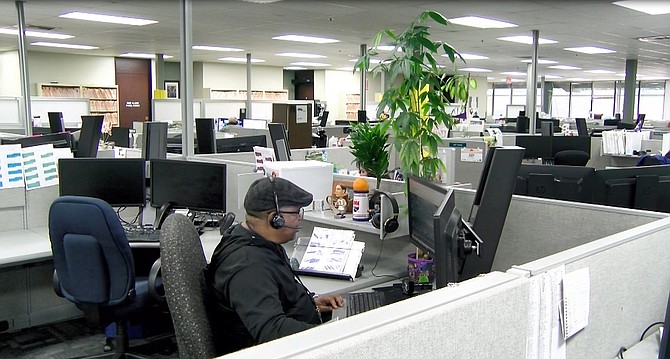 The EDD call center in May, when L.A. County had 20.9% unemployment.

While the nation’s jobless picture showed signs of improvement in May, Los Angeles County’s unemployment rate continued to surge last month, sparking debate among economists about the local outlook.

The county’s official unemployment rate hit 20.9% in May — a level not seen since the Great Depression — as 1 million Angelenos faced layoffs and furloughs caused by pandemic-driven business shutdowns.

The data, released June 19 by the state Employment Development Department, also included a higher number than initially reported for unemployment in the county during April. The figure was revised upward by more than 1 percentage point to 20.8%.

The gap between unemployment rates for L.A. County and California also widened in May, with the state reporting a 16.3% figure, compared to 16.4% in April. Nationwide for the month, unemployment was 13.3%, down from 14.7% in April.

“These figures are very troubling,” said Bill Allen, chief executive of the Los Angeles County Economic Development Corp., during a June 22 Zoom briefing. “One in five workers is unemployed” in L.A. County.

Local economists are divided on the state of L.A.’s economy, with some saying the jobless picture is not as bad as it appears and others saying the reality could actually be worse.

Several economists questioned the unemployment numbers reported by the EDD and the U.S. Bureau of Labor Statistics, saying these government agencies have been ill-equipped to collect accurate data during the unprecedented business shutdowns wrought by Covid-19.

The jobs numbers lead to larger questions about how deep a hole L.A. County’s economy is in and how quickly it will be able to recover from the coronavirus shock.

“Nationally speaking, April was the worst month, with May showing improvement,” said Christopher Thornberg, founding partner of Beacon Economics, which is based in Westchester. “But these numbers show L.A. was worse in May, which is a real mystery.”

Some of this could be explained by the county’s high concentrations of workers in the tourism and entertainment sectors, which were particularly hard hit by lockdowns and have been slower to reopen.

But Thornberg said his look at the data showed a major discrepancy between the number of people who said they were employed in the household survey upon which unemployment data is based and the number of jobs reported in the survey of employer payrolls.

“Both of these measure how many people in L.A. County lost their jobs over the past year,” he said. “Even accounting for some of the jobs being independent contractors and not showing up on payrolls, that’s still a huge gap.”

Moreover, he said, no other metropolitan area in the state had a discrepancy of this magnitude.

Thornberg said the employer payroll data is based on a larger sample size and tends to be more accurate than the household survey data.

Another local economist who also agrees that the household survey data is unreliable, said the error might be the other way, underestimating the unemployment rate.

Shannon Sedgwick, director of the LAEDC’s Institute for Applied Economics, said the Covid-19 pandemic and resulting business closure and stay-at-home orders likely reduced response rates to both the employer and household surveys.

Because the household survey was already a smaller sample size, this reduction in response rates made the survey even smaller and thus more prone to sampling errors.

This was compounded by a much-publicized national problem with the household survey data during the Covid-19 pandemic: the misclassification of workers sent home after their employers were ordered to shut down.

With the release of the May unemployment numbers at the beginning of June, the U.S. Bureau of Labor Statistics included an unusual cautionary note about the household survey and the unemployment rate.

Because so many furloughed workers were still retained on employer payrolls so that employers could qualify for federal Paycheck Protection Program funds, interviewers for the BLS classified these people as “employed but absent” from their jobs, even though they were not working and had filed claims for unemployment insurance.

As a result, the BLS said in its release, the national unemployment rate was probably understated by as much as 3 percentage points, meaning the reported rate of 13.3% was probably closer to 16.3%.

“In effect, this skewed the unemployment rate lower than it should have been,” Sedgwick said during the LAEDC’s weekly economic briefing over Zoom.

She added that some of this misclassification was accounted for by the EDD with its upward revision of L.A. County’s April unemployment rate to 20.8% from 19.6% and the higher May number of 20.9%.

But the April revision likely did not take care of the entire problem, she added.

“This issue with the data persisted into May,” Sedgwick said, meaning that the May unemployment rate may also have been understated, with the real rate possibly well over 21%.

Sedgwick said the Census Bureau, BLS’ parent agency, has put in place more measures to prevent this misclassification for future months and said she hopes the problem will be resolved.

The key issue at the center of this misclassification phenomenon is the unprecedented nature of this economic downturn. Businesses were ordered to shut down on a massive scale, but many employers kept furloughed workers on payrolls to maintain eligibility for the Paycheck Protection Program.

It is the fate of these furloughed workers that could determine the pace and extent of the recovery, especially after the PPP program ends next month, according to Sung Won Sohn, professor of finance and economics at Loyola Marymount University.

Sohn said he expects June unemployment numbers to start trending down but that the road ahead could include some sideways movement, or even the possibility of the unemployment rate ticking back up.

“Many of those furloughed workers won’t have jobs to go back to,” Sohn said. “Business, especially in services requiring people contact, won’t need as many employees as before. Once the PPP program ends, the jobless rate could rise again.”

“It is likely there will be a significant number of businesses that don’t survive this pandemic, not only due to the shutdown, but many businesses will also struggle upon reopening due to limited occupancy requirements and a continued reduction in consumer spending, which will continue until the public feels safe again,” Sedgwick said in an email.

One key indicator that William Yu, an economist with the UCLA Anderson Forecast, said he will be watching is statewide weekly unemployment insurance claims, which generally run a few weeks ahead of the unemployment survey data.

And then there’s the possibility of new business lockdowns due to future surges in Covid-19. Just in the last two weeks, coronavirus cases have hit record highs in several states, including California.

“If we see a continued surge in Covid cases, or new surges in the weeks and months ahead, this would really slow down the upswing in the economy,” Beacon’s Thornberg said.