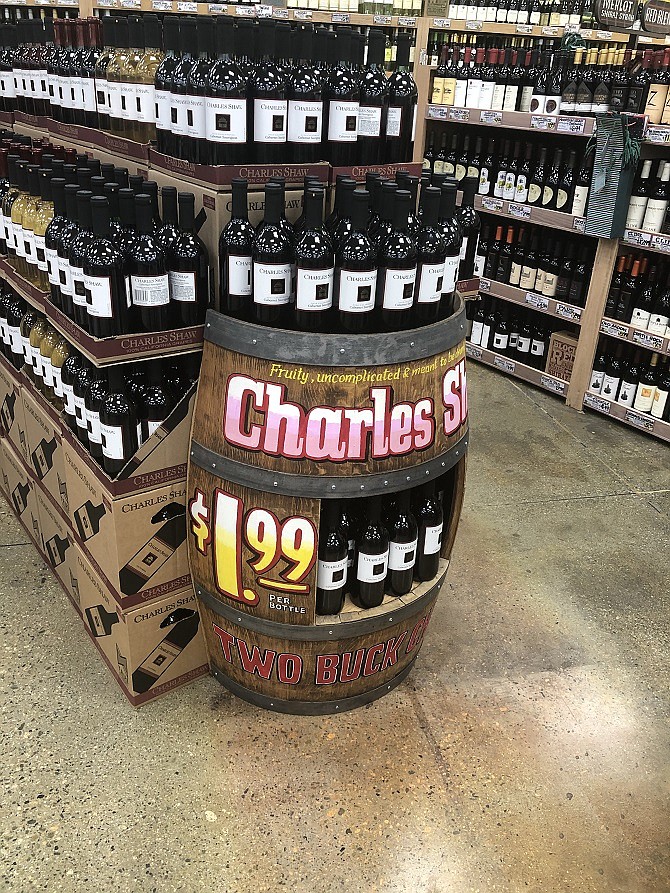 Trader Joe’s Co.’s Charles Shaw wine is living up to its Two Buck Chuck nickname again, at least in California.

The Monrovia-based grocer last week rolled back the price of the popular beverage from $2.99 to $1.99, the brand’s original price at Trader Joe’s stores. The price cut is permanent, but it applies only to California stores as distribution costs to other states are higher.

“Charles Shaw wine is a really big volume program,” said Matt Sloan, vice president of marketing and product at Trader Joe’s. “We’ve sold well over a billion bottles since introducing it, and there aren’t a lot of brands of wine that come close to that volume.”

“We’ve been able to work with the producer of Charles Shaw to make some improvements packaging-wise so that it uses less glass and the cork is a little bit different. … These cost savings have put us into a position where we can pass a lot of that savings right onto customers.”

The abundance of grapes in California for the last two years — likely a result of favorable weather — also contributed to the price rollback.

“The 2018 grape harvest in California was, from what I’ve heard, 18% larger than the previous five-year average, and so you have this huge jump in supply of grapes, and winemakers end up storing that excess wine,” Sloan said. “The harvest in 2019 was almost as big as 2018, so you have, back to back, way larger-than-usual harvests.”

That means winemakers — like Bronco Wine Co., located near Modesto and owned by the Franzia family, which produces Charles Shaw wine — have more wine to move, especially because storage space is already limited from holding the previous vintage.

Even at $1.99 per bottle, Two Buck Chuck earns its keep, according to Sloan.

“A lot of other grocers operate where they lose money on certain things as enticements to attract customers, and they make a bunch of money elsewhere,” Sloan said. “We have a very different approach, and everything that we offer has to earn that spot on the shelf.”

Trader Joe’s introduced Two Buck Chuck in 2002 and managed to keep the price at $1.99 until 2013 when it rose to $2.49 in California and increased up to $3.79 in states where distribution costs and taxes on alcoholic beverages have added to the price.

The company’s annual revenue across its 505 stores in 42 states is about $16 billion, according to a Business Journal estimate.