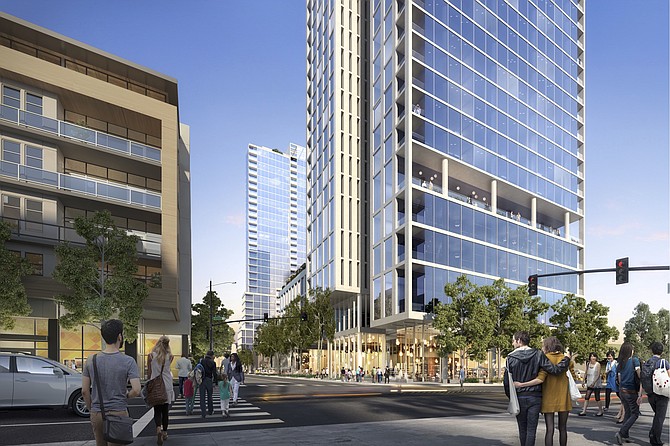 Crossroads Hollywood will include a 308-room hotel at the corner of Highland and Selma avenues.

With a $1 billion price tag, Crossroads Hollywood is one of the largest developments in one of the hottest areas in the city.

Harridge Development Group plans to incorporate the existing Crossroads of the World shopping plaza — a landmarked site built in the 1930s that is often referred to as the first outdoor mall in the United States — into the new development. 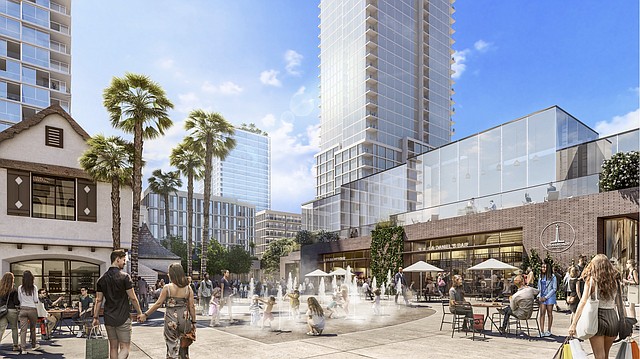 Crossroads Hollywood will have a 190,000 square feet of commercial space. Tenants will include restaurants and one entertainment retail anchor, such as a concert venue or movie theater.

The developer also will retain the historic original Hollywood Reporter building, which is part of the Crossroads complex on Sunset Boulevard.

Once completed, the megaproject will have nine new buildings, including a 308-room hotel. There will be 950 apartments, including 105 affordable units, and 190,000 square feet of commercial space.

David Schwartzman, president and chief executive of Harridge Development Group, has seen the market change in his 20 years working in Hollywood.

Now, the area has a “cool vibe,” he said. “A lot of the growth in Los Angeles is because of the film industry, and that’s Hollywood.”

As for the project itself, Schwartzman added, “We really want to create something that offers a little bit of everything to both the neighborhood and the world.” 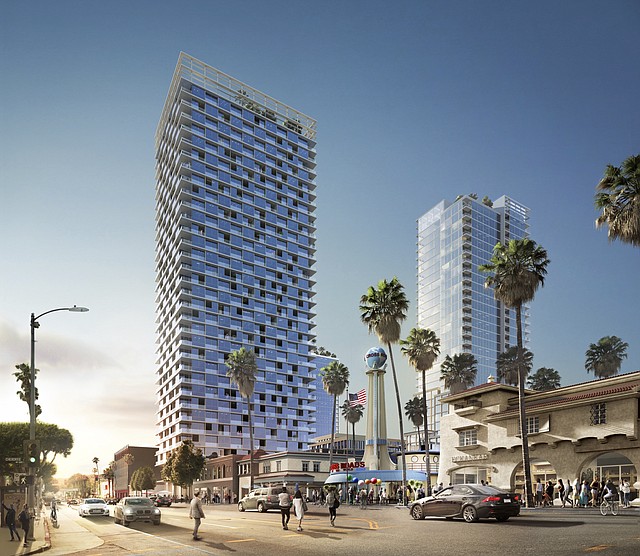 Crossroads Hollywood is being designed by Skidmore Owings and Merrill and Rios Clementi Hale Studios.

The project is expected to be completed by the end of 2025, with some phases opening sooner.

Crossroads Hollywood is being designed by Skidmore, Owings and Merrill and Rios Clementi Hale Studios.

Hollywood has become one of L.A.’s fastest-growing office markets.

“Since 2000, there’s been $5 billion invested in new projects in Hollywood on the office side, which has dramatically transformed the market,” said Richard Ratner, a senior vice president at CBRE Group Inc.

“Its centrality has been a key factor of Hollywood’s success. Its geography is ideal for L.A.’s spread-out entertainment industry. And by geography, I mean close to the Valley studios and downtown L.A.,” Ratner added.

The average asking rate for Class A properties in the area was $5.33 a square foot. Only the Westside had higher rents, with the asking rate hitting $5.51. 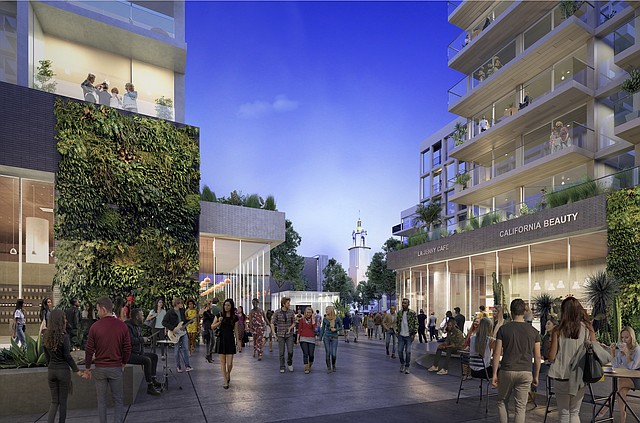 “Hollywood was underdeveloped for many years with a lot of surface parking lots,” said JLL International Director Carl Muhlstein. “When the Red Line came in, it became an easier connection to the San Fernando Valley versus the Westside. There was a lot of land, there was transit, and a lot of the talent was starting to migrate eastward.”

Many content creators and production companies, including Netflix Inc., have leased space in Hollywood.

Muhlstein said residential development came first, which gave companies the confidence to move to the area and have housing nearby. Hollywood’s proximity to major studios also makes it desirable, he added.

But development in Hollywood has faced some challenges. Many large-scale projects in the area, including Crossroads Hollywood, have been subject to lawsuits.

In 2019, the AIDS Healthcare Foundation and Liveable L.A. filed a suit against the city of L.A. and the Community Redevelopment Agency over the project, alleging that the city violated laws to fast-track the project’s approval. 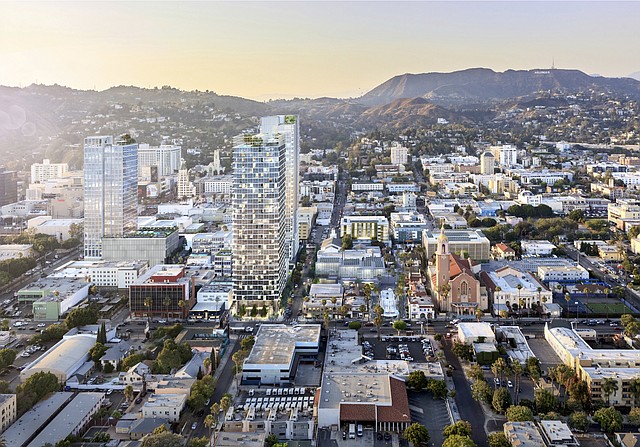 An aerial view of the north side of the Crossroads Hollywood project, which spans roughly 8 acres.

“That’s part of doing business in California,” Schwartzman said of the lawsuits. Harridge Development Group has more than a dozen projects in the works in L.A. and says it is open to doing more in Hollywood.

“The only thing now is the land-use issues,” JLL’s Muhlstein said. “There is a lot of litigation in Hollywood, so hopefully we are going to get through that with some land-use reform.”