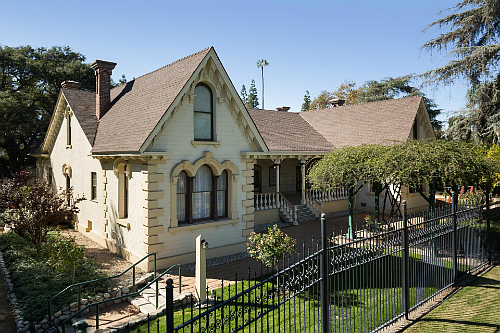 At the Workman and Temple Family Homestead Museum, visitors have the unique opportunity to immerse themselves in 100 years of history as they learn about how the region changed from the days of the Mexican ranchos in the 1840s to the 1920s.  The site features two historic homes, a pioneer cemetery, gallery, and gardens.

The history of the site begins with the family of William and Nicolasa Workman, who emigrated with John Rowland and others in 1841 Rowland and Workman received a land grant for Rancho La Puente from the governor of Alta California and the ranch eventually grew to almost 49,000 acres. The Workmans quickly established themselves as cattle ranchers and did well financially during the Gold Rush supplying fresh beef in the gold fields. When a series of floods and droughts in the 1860s largely put an end to cattle ranching in the area, the family transitioned by expanding more into agriculture, including the main crops of wheat and grapes. By 1870, the Workmans remodeled their adobe home to its current appearance including the addition of new first-floor rooms and a new second floor. Unfortunately, the family bank in Los Angeles collapsed in 1876 leading to the loss of most of the family’s wealth and land.  Though the Workman House and 75 acres of land around it stayed with the family after the bank failure, even that was lost by the end of the 1800s.

Following the discovery of oil by their son on land they owned in the Montebello hills, the Workmans’ grandson, Walter P. Temple, and his wife, Laura, bought the Workman House and surrounding land in 1917. The family decided to build a home next to the Workman House, which came to be known as La Casa Nueva (The New House).  The Spanish Colonial Revival mansion is filled with architectural crafts ranging from decorative tile to stained glass to carved plaster and wood. During the 1920s Walter Temple was involved in numerous business endeavors, including oil drilling in Alaska, Texas, Mexico and greater Los Angeles and real estate development in Los Angeles and the San Gabriel Valley. In 1923 he founded the Town of Temple, soon renamed as Temple City. Sadly, like the Workmans, the Temples lost their wealth through failed investments and lost the Homestead to foreclosure in 1932.  After that, the property was used as a boys’ military school and a convalescent hospital before the City of Industry purchased the property in the 1960s and 1970s.  Restoration of the Homestead took several years and the museum opened in May 1981.

The Homestead offers workshops, lectures and presentations, festival events and many other programs.  Free guided tours of the homes are offered Wednesday-Sunday at 1, 2, 3, and 4 p.m.  El Campo Santo Cemetery, established by the Workmans in the 1850s and featuring a mausoleum built by the Temples in 1921 and which is the final resting place of Pío Pico, the last governor of Mexican California, is open for self-guided tours during office hours (Monday through Friday 9 a.m. to 5 p.m. and Saturday and Sunday from 12:30 to 5 p.m.).  Most of the site is wheelchair accessible.