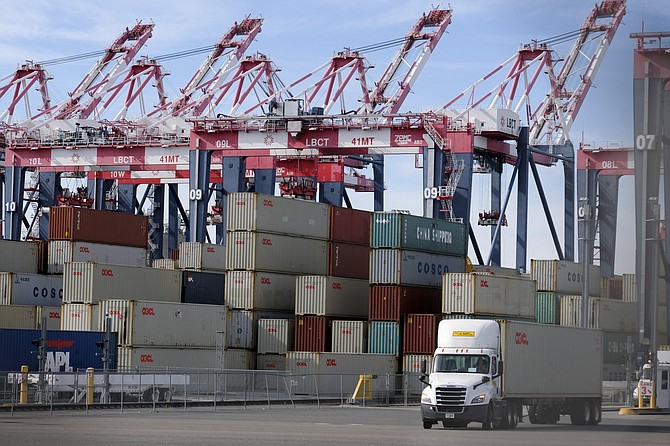 Plans to implement fees tied to the Clean Truck Fund appear to be on hold as the the San Pedro Bay ports grapple with pandemic-related cargo declines and labor shifts.

“Previously, we anticipated that the rate would go into effect later this year,” Heather Tomley, managing director of planning and environmental affairs at the Port of Long Beach, said during the Long Beach Harbor Commission’s July 27 board meeting.

“However, with the impacts being experienced by the port industry, we recommend continuing to monitor the economic indicators and the effects, and delaying the initiation of the rate to likely sometime next year,” Tomley added.

The ports complex reported 104 canceled sailings in the first half of 2020, up from 41 during the same period last year. Tomley said cargo volumes for the year will likely come in 20% below what ports officials initially anticipated.

Harbor commissions at both ports voted in March to impose a $10 fee per loaded twenty-foot equivalent unit of cargo moved by trucks in and out of port terminals.

The decision, three years in the making, aims to speed the transition to a zero-emissions truck fleet serving both ports by 2035. It calls for cargo owners to pay the $10 fee to help finance replacement of older diesel trucks with substantially more expensive zero-emission trucks.

The rate was expected to generate about $90 million per year, based on prepandemic cargo volumes.

According to the California Air Resources Board, trucks are responsible for 70% of smog-causing pollution and 80% of carcinogenic diesel soot, even though they comprise only 6.6% of the 30 million registered vehicles in the state.

More than 18,000 trucks are registered to operate in the ports of Los Angeles and Long Beach. Roughly 13,000 are considered active, having entered the ports within the last 30 days.

About 61% of all trucks working at the port meet the 2010 emissions standards set by the Environmental Protection Agency, which calls for all heavy-duty diesel engines model year 2010 or newer to be equipped with nitrogen oxide, or NOx, exhaust control technology.

Nearly 39% of trucks meet the less stringent 2007 Environmental Protection Agency standard, which requires use of a diesel particulate filter on trucks model year 2007 and newer.

Some 729 trucks that transport cargo at the ports are powered by liquefied natural gas, according to Tomley. Around 20 trucks are electric and produce zero emissions. Zero-emission trucks are exempt from the rate, and the harbor commissions are considering exemptions for near-zero emissions trucks.

The California Air Resources Board is also working on defining the NOx engine emission standard at the state level.

The agency in June adopted a rule requiring truck manufacturers to transition from diesel trucks and vans to electric zero-emission trucks beginning in 2024. It also said it expects that every new truck sold in California will be zero-emission by 2045.

Port of Los Angeles Executive Director Gene Seroka said postponing the implementation of clean truck rates at the port complex has been a part of “an ongoing discussion with air regulators, our trucking partners, the cargo owners, and it’s a polarizing conversation, very difficult.”

He also said the Port of Long Beach staff did not confer with him before announcing the recommendation.

“We do want to push the envelope on moving to cleaner technology, but this traditionally has been done in partnership between the twin ports here in San Pedro Bay, and the unilateral decision on this is disappointing,” he added.