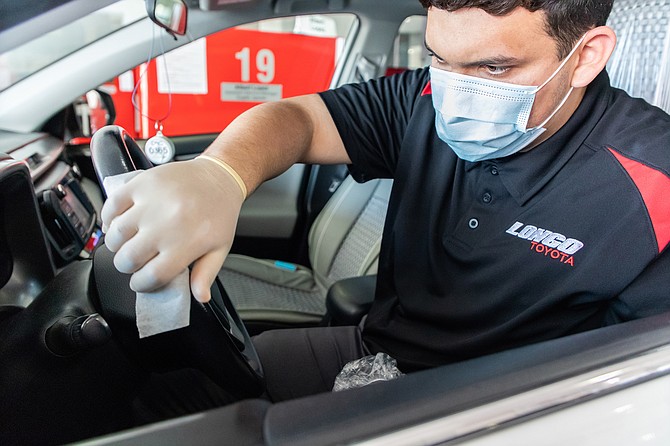 Confusion about the intent of Mayor Eric Garcetti’s revised Safer at Home order prompted some 70 auto dealers with Los Angeles addresses to cease all sales for weeks while other retailers pivoted to ecommerce.

The March 19 order to curb the spread of Covid-19 in the city classified “auto repair shops that operate adjacent to or otherwise in connection with a used or retail auto dealership” as essential businesses. An April 1 revision included an additional stipulation that “no auto dealership may operate, with the exception of its auto service and part stores.”

“After March 19th, because the order was kind of confusing, some dealers were doing ‘by appointment’ deliveries in showrooms,” said Bob Smith, an executive director of the Greater Los Angeles New Car Dealers Association. “And when the officials responded with the April 1 order, it was supposed to clarify that all showroom sales to public by appointment (must stop). When they rewrote the order, they didn’t clarify about online sales. They just didn’t go into that detail.” 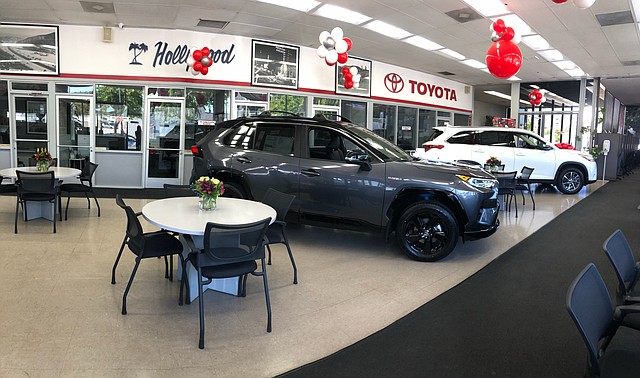 Toyota of Hollywood closed showrooms in favor of home delivery.

Calls to the mayor’s office from individual dealers and the association led to an April 15 clarification that online car sales were never meant to be interrupted. That step was “very meaningful to the dealers in the city” Smith said because it aligns the mayor’s order with similar orders from L.A. County and the state. “It creates uniformity,” he said, adding that dealers will “continue to work with health officials and support whatever protocols are needed to ensure what is safe for all.”

Bringing furloughed sales employees back to work, however, will be a “slow process.”

“The dealers that I talked to are all saying that they are transacting between zero and five cars a day doing online remote delivery only,” he said. “So, if that’s how slow the business is, there won’t be an immediate need to scale up quickly.”

Mike Sullivan, the second-generation owner of 12 dealerships under the LACarGuy umbrella, said their sales departments are about to “reopen on a very, very limited basis,” and “100% online, including signatures.”

“It has to be a home delivery,” Sullivan said. “They cannot come into our showroom, they cannot congregate, they cannot come down and take a test drive, and they cannot wander the lot with a salesperson — nothing that feels like business as usual can be done in L.A. County, L.A. city, period.”

The LACarGuy dealerships pull in about $1 billion in annual revenue. Online sales “will be a fraction of our normal business, but at least we’ll be functioning,” Sullivan said, adding that “as the mayor and the governor start to take the restrictions off, we’ll be in a more natural, organic position to open up completely or open up more at each stage.”

Although just one of his dealerships, Toyota of Hollywood, had to comply with the Safer at Home order, Sullivan closed all of them on March 20, amid diminishing sales and conflicting reports on the effectiveness of face masks.

“It was an easy decision to make to close — we couldn’t put our employees or guests in a dangerous position,” he said.

Each LACarGuy dealership employed between 70 and 130 workers, for a total of 930. About 630 of them were furloughed.

Sullivan took over the dealership business in the mid-1990s from his father, Wilfred, who was better known as Sully, and now runs them, together with his sons, Kelly and Sean, and daughter Meghan. A “high percentage” of his employees have been with the company for 25 years, he said, and “a bunch of them are second generation and even some third generation with the Sullivan family, and now they’ve been furloughed and on unemployment. It’s shocking. I’ve been doing this 47 years. This was the worst month of my automotive life.”

“We completely shut down for two weeks between March 17th and March 31st, just to make sure we were compliant with all of the orders and that we had the processes in place to be able to do things online,” Eroh said, adding that he also had to furlough most of his sales team.

While ecommerce represents about 20% of sales on a “normal” month and home deliveries were already offered at the adjacent Longo Lexus, the dealership had to implement new procedures to keep its customers and service employees safe.

The changes include home delivery of parts and shuttling customers, one at a time, for service appointments. The spacious waiting lounge, featuring a Starbucks and a Subway, is closed. The dealership is also accepting drop-offs of vehicles needing repair, without direct contact with service advisers or filling out paperwork.

“The most important thing right now is to limit interactions, to try to help do our part to slow the spread of (coronavirus).” Eroh said. “We’re not doing any test drives or anything sales-related on site. … We’ve done FaceTime with customers to show them cars, and then they select something, and we bring the car to them, let them drive it, and then either bring it back, or they make a decision to keep it.”

Although Longo Toyota is not within L.A. city limits, when online sales resumed on April 1, the decision was made not to serve any customers from that area until the order was further clarified. Sales since then have been “a fraction of what we would do in a normal course of business,” Eroh said.

Local sales were lower than the national averages last month, as several states have not yet implemented social distancing and stay-at-home restrictions.

Santa Monica-based Edmunds.com Inc. projected that some 1 million new cars and trucks were sold in the United States in March, for an estimated seasonally adjusted annual rate of 11.9 million. That’s a 35.5% decrease from the same period a year earlier, and a 23.4% drop from February.

Smith said that while some dealerships may go out of business if restrictions continue well past April, the association remains optimistic that coronavirus-related loans, such as the Payroll Protection Program and Economic Injury Disaster Loan assistance, “will create cash flow to get to places where opening for business is deemed safe.”

Sullivan said he shared this view.

“You can’t be a car salesman without being a huge optimist,” he said. “I know this will change, but not for April. I do think that toward the middle of May, we’ll start to see a little uptick, start to bring some people back. I don’t see it as some sort of dramatic change until we slowly work our way back up where perhaps in July, we’re in some sort of normalcy.”