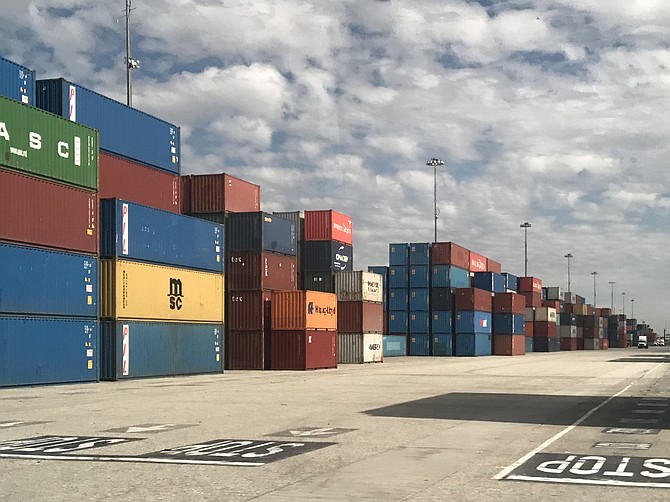 The trade war and the pandemic caused a drop in cargo volume at the Port of L.A. Photo by Mediha DiMartino

Cargo volume at both local ports was down as expected in March, but the Port of Los Angeles experienced a more severe dip in traffic.

There were 19 “blank” or canceled sailings to Port of Long Beach during the opening quarter of 2020, which contributed to a 6.9% decline in cargo shipments compared to the first three months of 2019.

Most of the cancellations were tied to the Covid-19 pandemic that broke out in December in Wuhan, China, according to Noel Hacegaba, deputy executive director of administration and operations for the Port of Long Beach.

The Port of Los Angeles saw 41 canceled sailings during the same period, and its cargo volumes decreased 18.5%.

“We’ve had two serious shocks to our supply chain system,” Port of Los Angeles Executive Director Gene Seroka said in a statement. “First the trade war between the U.S. and China, and now the Covid-19 pandemic.

“With U.S. retailers and cargo owners scaling back orders, volumes are soft even though factories in China are beginning to produce more. Amid this public health crisis, there will be uncertain months ahead in the global supply chain,” Seroka added.

Similar cargo volume issues were reported by other ports in the nation — overall retail imports in March dropped to 1.27 million TEUs, the lowest level in five years.

Imports are projected to “remain significantly below normal levels through early summer as the coronavirus pandemic continues,” according to the Global Port Tracker report released by the National Retail Federation and Hackett Associates, an Arlington, Va.-based firm that provides consulting, research and advisory services to the international maritime industry, government agencies and international institutions.

“The Covid-19 pandemic is unraveling the economy nationally and globally as most of the world moves toward a lockdown that entails the closure of significant portions of both the service and manufacturing industries,” Hackett Associates founder Ben Hackett said in a statement.

“The largest drop is forecast for the first half of this year but with uncertainty about the length of the lockdown and extent of the pandemic, the second half may not be in better shape,” he added.

The Port of Long Beach last week also announced that it had received a $14.5 million grant from the U.S. Department of Transportation’s Maritime Administration for its Terminal Island Wye Track Realignment railroad project. The port will fund the remaining $25.5 million portion of the project.