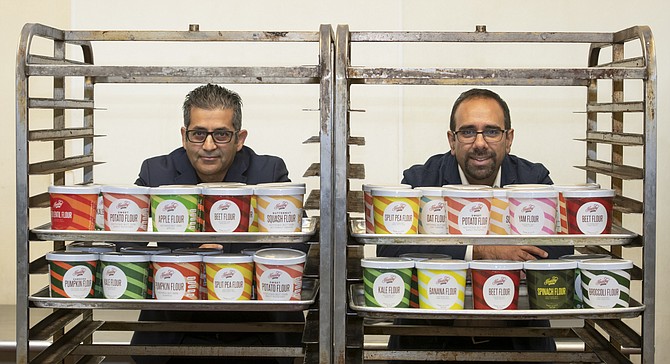 The recent shortage of all-purpose flour has forced some consumers to reach for almond or coconut substitutes as they hone their quarantine cooking skills.

For Hearthy Foods’ consumers, though, non-grain options have been a staple for some time.

The downtown-based company specializes in fruit and vegetable flour — think apple, banana, kale, squash, hemp, beet, broccoli, spinach or mango — that’s ready for use in baking or for adding to soups, stews or smoothies.

Hearthy Foods’ founder and President Riaz Surti is a serial entrepreneur who watched his mother struggle with food intolerance issues, and high blood pressure and cholesterol. She had to stop eating carbohydrates, including her favorite “roti with atta,” an Indian flatbread made with whole wheat flour.

“I remember looking at her face and seeing how sad she was and thinking ‘I have to make something that would benefit her,’” Surti said.

He turned to fruits and vegetables, perfecting his manufacturing process along the way.

“The key is to mill it so it has the same consistency as all-purpose flour,” Surti said. “Not too airy or too light.”

Surti gets his supplies from L.A. Wholesale Produce Market, located less than a mile from Hearthy Foods’ 20,000-square-foot plant in L.A.’s Arts District. He slices the produce then dries it in ovens he once used to bake cheesecakes and pies for the Vons and Albertsons Co. Inc. grocery store chains. Surti then mills it into flour and packages it in colorful containers resembling pints of ice cream.

“We did that for dramatic effect, as market distinction,” he said, adding that the tubs debuted on “The Final Table,” a cooking show on Netflix that featured chefs preparing foods from various parts of the world.

“A TV producer came and bought pounds of pumpkin flour, but we didn’t know it was for that show,” Surti said.

Hearthy Foods has 10 employees, including Chief Operating Officer Shahab Malik. The company projects it will end 2020 with about $2 million in revenue.

It sells its products mostly online, both through its own ecommerce website and Amazon.

Hearthy Foods says some of its customers have food intolerances or allergies, and others are looking for palate-pleasing, pure, grain-free ingredients or to ward off illness.

The company is part of a growing trend, according to NPD Group Inc., a New York-based market researcher that collects receipt data from brick-and-mortar and ecommerce transactions as well as from 12 million consumer surveys.

“There’s this feeling that my food or beverages can actually provide me with some kind of health benefit, that it’s not just about taste and sustenance and/or just keeping me full — that there are perhaps some long-term benefits for certain foods, and consumers are starting to gravitate for those foods,” said Darren Seifer, food and beverage industry analyst for NPD.

“You hear about ingredients like turmeric that seem to help keep off inflammation ... or manuka honey, which is another way to sweeten the food while providing benefits,” Seifer said. “Cannabis is a big one that we keep hearing about, and the role that’s going to have on the food industry.”

He also emphasized that “this is not about consumers becoming vegetarian or vegan as 90% of the people using these products also eat meat and dairy. So, it’s not about a rejection of traditional forms. It’s about adding some of these alternatives to their repertoires.”

Nearly one-quarter of adults in the United States report they are on a nutrition plan with the goal of promoting long-term health, according to NPD, but not necessarily weight loss.

One in five adults manages a health condition with food and beverage choices. Seifer said they are not skipping the doctor’s office, but many first look at what they eat or drink before turning to medication.

Along with Hearthy Foods, other firms in the marketplace include Marina del Rey-based Thrive Market Inc., a 650,000-member ecommerce platform that, in exchange for a $60 annual fee, offers natural and organic products at 30% to 50% off retail.

Thrive Market sells both third-party goods and its own brands, including nut-based flour. The privately held company, which was founded in 2013 by Kate Mulling, Nicholas Green, Gunnar Lovelace and Sasha Siddhartha, has raised about $160 million to date and has more than 500 employees.

El Segundo-based Beyond Meat Inc. is another key player. Its plant-sourced meats alternatives are sold at Costco Wholesale Corp., Kroger Co., Albertsons, Whole Foods Market Inc. and Target Corp. stores. The company, which employs more than 470 workers and had a market value of about $4.15 billion as of March 30, is aiming for the $500 million revenue milestone in 2020.

“The opportunity before us, I think, is unprecedented. The consumer is ready for what we’re doing,” Beyond Meat Chief Executive Ethan Brown told analysts during a recent earnings call. “You’ll see us make a lot of investment this year in our production capacity, in our international growth, in our marketing and, of course, continuing to research and push forward the idea that you can build a piece of meat directly from plants that is indistinguishable from animal protein.”

Hermosa Beach-based PowerPlant Ventures is leading the charge on the funding side. The venture capital firm closed a $165 million second fund in August to further its investment in what co-founder Mark Rampolla called “the early innings of a major food revolution,” according to a statement the company issued at the time.

The PowerPlant team includes Rampolla, who founded Zico Beverages, a coconut water pioneer that was acquired by the Coca Cola Co. in 2013; Kevin Boylan and T.K. Pillan, co-founders of Veggie Grill Inc.; and Dan Gluck, co-founder of Health Warrior, a superfood brand acquired by PepsiCo Inc. in 2018.

“They gave us an offer, but I think we can do a little bit better if we hold on a little bit longer,” Surti said. “We know we are on the right track. All we’ve got to do is continue our ecommerce sales.”