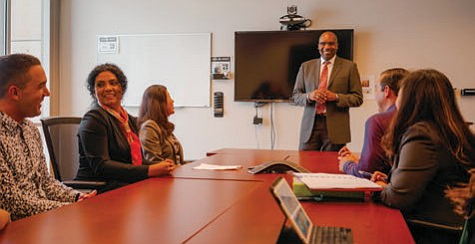 Since Ronnie Campbell joined Metrolink in 2016 as Chief Financial Officer, he has re-established trust with the Board of Directors and the five Southern California transportation authorities that govern the agency through excellence in financial accountability. Metrolink is a regional railroad servicing six counties with nearly 12 million annual boardings. Campbell also served as Interim Co-Chief Executive Officer from October 2018 – January 2019.

Campbell conducted a full assessment of the agency’s Finance Department and introduced key measures to drive the department and agency to success. He skillfully managed the agency’s $130+ million investment portfolio.

Campbell is responsible for developing Metrolink’s Operating Budget and Capital Program, leads financial reporting to federal, state and local agencies that include holders of municipal debt. He oversees the implementation of fiscal and accounting policies, procedures and processes to address internal controls.

With his demonstrated leadership in the Finance Department, Campbell was asked to oversee other departments, such as Information Technology, Fare Collections and Grant Funding and Reporting. Campbell broadened his scope of expertise with the new departments contributing to success in these critical areas.

Campbell began his career in financial management while working for the San Diego Housing Commission and then the City of Lakewood, where he served as assistant director of Administrative Services for more than 11 years.

Prior to joining Metrolink, Campbell was the director of finance for the City of Camarillo. During his tenure, he produced six balanced budgets during the national economic recession and led the city’s effort in long-term fiscal planning. Under his leadership, the department continued to receive the Government Finance Officers Association’s Excellence in Government Finance Award for Financial Reporting and Budgeting, an award it received for 26 years consecutively.

He is an active member of his church in Long Beach, where he sings in the choir and works with the finance team and board of directors.