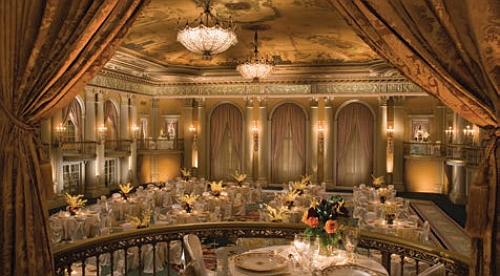 Soon to be celebrating its 100-year anniversary – and having added the ‘Los Angeles Historic-Cultural Monument’ accolade to its mantle – Millennium Biltmore Los Angeles is the grand dame of downtown and this district’s most historic, classic and storytelling hotel.

All the glory and glamour of classic Hollywood lives on at the Biltmore, a 1923 iconic hotel that has hosted eight Oscars, celebrities such as Clark Gable, Shirley Temple and Walt Disney and presidents such as John F. Kennedy, Ronald Reagan and George W. Bush. It has also served as a set for TV shows, movies, and music videos, including Mad Men, A Star Is Born featuring Lady Gaga and Bradley Cooper, and Taylor Swift’s music video for hit song “Delicate.”

Also known for turning moments into unforgettable memories for leisure and corporate travelers, your exquisite stage can also be set at Millennium Biltmore Los Angeles. Featuring 70,000 square feet of flexible meeting and event space, presenting an unmatched blend of luxurious suites, spectacular breakout rooms and five glamorous ballrooms, you have your choice of the ideal setting for anything from private soirees and productive corporate sessions to high-level meetings or a perfect celebrity tea party in the heart of “City of Angels.”

Historically speaking, The Biltmore has been host to some of the most influential meetings and events. The founding banquet of the Academy of Motion Picture Arts and Sciences was held in the hotel’s magnificent Crystal Ballroom in 1927. The hotel went on to host eight Academy Awards banquets in the ‘30s and ‘40s. John F. Kennedy stayed at the hotel and spoke in the ballrooms during the 1960 Democratic National Convention.

Without equal, for the most historic and glamourous conference rooms, impressive meeting experience and profound event service in downtown Los Angeles, there is simply no better venue choice than Millennium Biltmore Los Angeles, which is recently recognized as “Best Historic Hotel” and “Best Downtown LA Wedding Venue” by renowned industry and media associations.

Guests enjoy classic-contemporary rooms with modern conveniences and comfort. Club-level rooms and specialty suites at high levels are perfectly set up for corporate travelers with enhanced amenity and exclusive access to Club Lounge and the self-service Business Center. Free sign-up and instant rewards are on hand for both My Millennium Loyalty Points and Millennium for Business corporate loyalty programs -- which are newly launched and redeemable at worldwide Millennium Hotels & Resorts.

To learn more and to plan your next staycation or function, visit thebiltmore.com. Or take the brand-new 360 virtual tour at vr.peekpeek.com/millennium_biltmore_la/