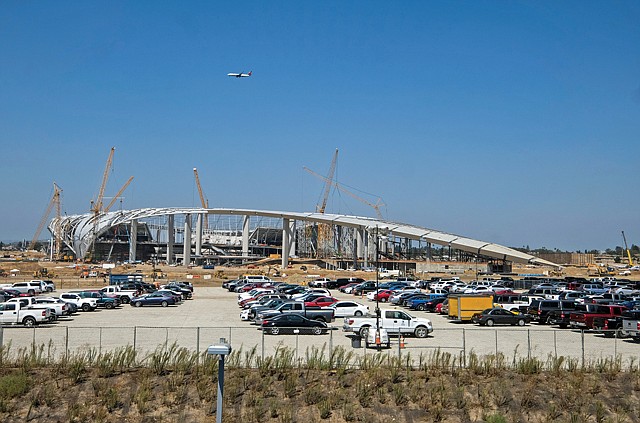 Flying High: Construction is 75% complete on the Inglewood project. Photo by Ringo Chiu.

With less than a year to go before the Los Angeles Rams and Los Angeles Chargers take the field at their new stadium in Inglewood, the $5 billion project seems likely to avoid any delay of game penalties.

Construction is 75% complete, according to Jason Gannon, managing director of the Los Angeles Stadium & Entertainment District at Hollywood Park, and the complex is on track to open in the summer of 2020.

And when the stadium opens, it will finally have a name. After months of speculation, LASED confirmed Sept. 16 that online lender SoFi Lending Corp. has secured naming rights in a 20-year partnership with the Rams and Chargers. The new venue will officially be known as SoFi Stadium.

Gannon also said that because the 70,000-seat stadium is on schedule, it will be able to play host to events in July, before the venue’s National Football League teams begin preseason play in August.

“You always have to be careful with what you promise,” Gannon said, “but because of the partnerships we have formed and the events we already have secured, we have a high responsibility to deliver on those in terms of a fan experience and only anticipate increasing that event schedule.”

When the nearly 300-acre L.A. Stadium complex is completed, it will include a 6,000-seat performing arts venue; 900,000 square feet of retail space; 800,000 feet of office space; 2,500 residential units and a 300-room luxury hotel, all set amid public parks. The stadium itself can also be expanded to accommodate 100,000 for certain events.

Upcoming construction milestones include completion of the arching steel and glass roof — the stadium’s signature feature — which is targeted for January. Workers began erecting the canopy in June 2018.

Work on the pavement surrounding the stadium bowl, which started earlier this month, is scheduled for a May 2020 finish.

“The most incredible part of the roof and its footprint — it encompasses about a million square feet — is that it speaks to not just the physical scope and size of the project but how it fits appropriately within the entire project,” said Gannon, noting there are still 10 cranes and more than 3,000 workers a day on the job site.

A visual marker of the project’s progress, the roof can now be seen from various vantage points around Southern California.

In fact, the stadium’s striking architectural profile, along with a location that’s squarely in the flight path for planes landing at Los Angeles International Airport, helped lead to a recent naming rights deal with American Airlines Inc.

“Through the process, they were telling us that as their planes were approaching LAX, the No. 1 question from customers who might not be familiar with Los Angeles in general was about the structure they could see below,” Gannon said. “To us, that speaks not just to the location of the project but, in the long term, how it creates an elevated view so that you don’t have to be on the site to experience it in so many different ways — that has never been done before.”

The LASED and American Airlines eventually struck a deal for naming rights to the 2.5-acre plaza at the entrance to the stadium.

Rams owner Stan Kroenke, whose personal wealth is valued at $9.7 billion by Forbes, has invested a reported $1.6 billion of his own equity in the L.A. Stadium complex, with the rest financed by loans.

Kroenke purchased the 60-acre parcel of land, which was formerly home to Hollywood Park Race Track and sits adjacent to the Forum, in 2014. A year later, Stockbridge Capital Group, owners of the Hollywood Park Land Co., announced a partnership with Kroenke Sports & Entertainment to add that parcel to a development that started with the demolition of the landmark track, which was built in 1938 and closed in 2013.

In early 2016, Kroenke filed for permission to move the Rams, who played as Los Angeles’ NFL team from 1946 to 1994, back to Southern California. The request was approved in time for the Rams to begin the 2016 season at their former home, the Los Angeles Coliseum, while construction started in Inglewood.

The L.A. Stadium was originally slated to open in 2019, but heavy rain from winter storms in 2016 caused the opening to be pushed back a year.

That delay doesn’t seem to have affected the appetite for the venue, which will host Super Bowl LVI in 2022; college football’s national championship game in 2023; and is set to play a key role in the 2028 Summer Olympics, hosting the opening and closing ceremonies.

Gannon confirmed the facility is close to selling out its 125 premium suites, which provide access to all stadium events. Some suites can accommodate groups of up to 30 people. The Rams and Chargers have their own inventory of 135 suites that are sold separately.

“From a design and fan-experience perspective, and speaking to Mr. Kroenke’s vision, you want to build on what works with other venues but keep in mind L.A. has incredibly unique aspects of its environment that we want to embrace,” Gannon said.

“Incorporating the design drivers of an indoor-outdoor experience with a roof canopy above it and open air on the sides to allow the natural experience is incredibly unique,” he said. “We can embrace what works in other venues and work to make it even better in L.A.”

Bruce Baltin, managing director of CBRE Group Inc.’s Hotels’ Consulting in Los Angeles, said that as progress continues to be made at the Inglewood facility, he has heard discussions about increased hotel development in the surrounding areas, including the corridor along Century Boulevard that leads to LAX.

It could take more than four years to build upscale hotels in that area, Baltin adds, from purchase of the land and entitlements to plan drawings and construction.

“The hotels never come first but are based on the success of the development,” Baltin said. “When and where that happens is the question, but there is certainly a chance for substantial hotel construction down the road, and a lot of people are looking at all that right now. It will happen.”