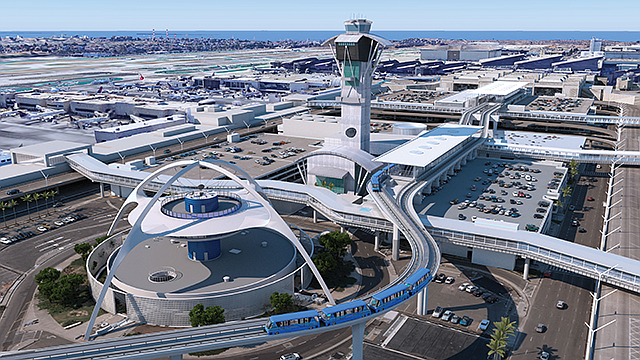 In a first, a team of women-led businesses has secured a major contract from L.A. County’s transit authority.

The group will provide construction consulting services for a rail and bus airport connector station to link the Crenshaw/LAX rail line with the people mover system now under construction at Los Angeles International Airport.

Five of the six companies — including the two prime contractors — are led by women; the sixth is led by an African American entrepreneur.

This is the first contract of significant size and scope awarded by the transit authority to companies led by women, the agency said.

“This group of talented individuals has the experience and competence in construction support service, design-bid-build and integrated team structure on some of the most challenging and complex projects in the country,” Phillip Washington, the transit authority’s chief executive, said in the announcement. “It’s nice to have this highly professional team of females take the lead on a major transportation project in a field traditionally dominated by men.”

It is extremely rare for infrastructure projects to be awarded to a slate of contractors entirely or almost entirely run by women.

Manhattan Beach-based public affairs consultant Jamarah Hayner said that in her several years of experience with infrastructure-related contracts in Southern California, this is the first time she has heard of a contract going to a team of this many women-owned companies.

“The outstanding quality of women-owned businesses working today in Los Angeles makes news like this wonderful but not at all surprising,” Hayner wrote in an email. “When women like Lydia, Fariba, Joy and the rest of their team compete, they’re a force to be reckoned with.”

Construction is set to begin next year on the airport connector transit station at Aviation Boulevard and 96th Street. The station is scheduled to open in 2023.

It will serve as the transfer point between local bus and rail lines and the automated people mover system that will provide rides to and from LAX passenger terminals.

The project is expected to cost at least $350 million. No construction team has been selected yet.