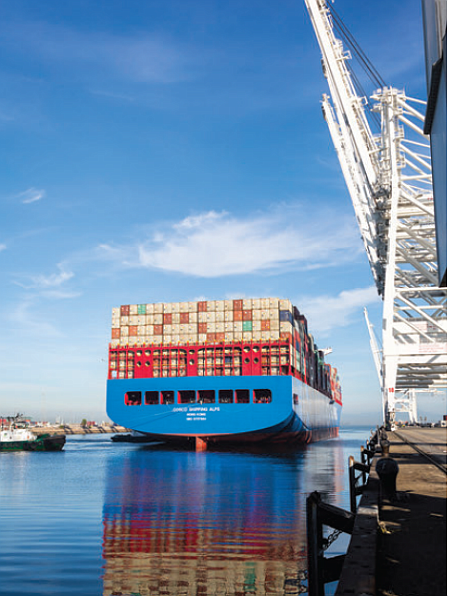 Your neighbor, the Port of Long Beach, is the premier U.S. portal for trans-Pacific trade and a trailblazer in innovative goods movement, safety, environmental stewardship and sustainability.

As the second-busiest container seaport in the United States, the Port handles $200 billion in trade annually and supports 2.6 million trade-related jobs across the nation, including 575,000 in Southern California.

Customers choose the Port of Long Beach because we are the most reliable, greenest and most cost-effective portal for the movement of goods to America’s major consumer markets and

from America’s manufacturers and growers. In 2018, the Port handled 8.1 million container units, achieving the busiest year in its 108-year history. Led by the five-member Long Beach Board of Harbor Commissioners and Executive Director Mario Cordero, the Port of Long Beach is internationally recognized for its environmental stewardship, operational excellence, customer service and dedication to community service.

The Port is completing a decade of $4 billion in capital improvement projects, aimed at building some of the most modern, efficient and sustainable marine facilities in the world to accommodate longer and wider ships, while generating thousands of new jobs.

The two largest projects are the $1.47 billion replacement of the aging Gerald Desmond Bridge and the $1.5 billion program creating the new Long Beach Container Terminal. The new, landmark, cable-stayed bridge will be safer and provide better port access than the current span, which was completed in 1968. It will be higher to accommodate larger ships underneath and will be wider for the vehicles that cross it every day. About 15% of containerized goods imported to the U.S. travel over the Desmond Bridge.

Long Beach Container Terminal, which opened its first phase in April 2016, is the greenest, most technologically advanced container terminal in North America. At full build-out in early 2021, it will move twice the cargo of the two terminals it replaced, with far less than half the air pollution. It is a vital part of the “Green Port of the Future.”

Back to the waterfront

Earlier this year, the Port returned to the waterfront by moving into a new administration building as part of the redeveloped Long Beach Civic Center, which also includes a new City Hall, Main Library, park and private development. Another $2 billion in projects are planned for the next 10 years, including improvements to Port roads and channels, along with a massive investment in a rail network that will ease traffic congestion and improve the movement of cargo throughout the Port complex.

Long Beach is one of the few U.S. ports that can welcome today’s biggest ships. The Port has already hosted the 19,500-TEU (twenty-foot equivalent unit) MSC Eloane — the largest container vessel to visit North America – and now has terminals that can welcome even larger ships.

In order to ensure that growth at the Port is “green,” the Port invests millions of dollars each year to encourage the development of clean air technologies. For example, the Clean Air Action Plan has led to an 88% reduction in diesel particulates since 2005, even as cargo flow has increased. For a cleaner future, the Port is shifting to zero-emissions cargo-handling equipment by 2030, along with a goal of having truckers switch to zero-emission vehicles by 2035.

The Port has seen dramatic improvements in harbor water quality as well as increases in biodiversity, the numbers of marine animals and the acreage of kelp in Port waters, all indicating the increasing health of the harbor ecosystem.

Meanwhile, the Port of Long Beach prides itself on its culture of excellent customer service. Industry leaders have named it “The Best Seaport in North America” for 19 of the past 22 years.