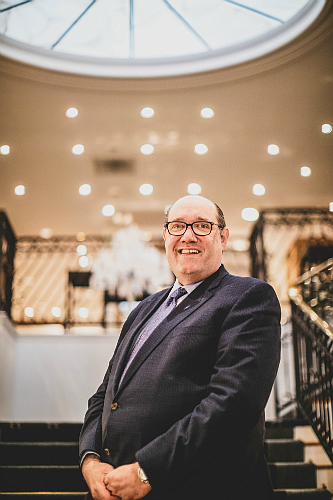 This coming December, GEARYS Beverly Hills will celebrate 90 years as experts in luxury entertaining and gift-giving. Clients over the years have included Hollywood royalty from Fred Astaire to Kim Kardashian, as well as European royalty and Beverly Hills elite.

GEARYS began in 1930 as an art supply and gift store. In the early 1950s, the company’s namesake, H.L. Geary, passed away. The store was sold in 1955 to Fred and Ruth Meyer, who transformed GEARYS into a luxury goods store. An apprentice since 1955, son Bruce became President in 1977, expanding GEARYS through the launch of a successful mail-order business. In the flagship store, Bruce partnered with world-class names like Baccarat and Lalique, and established the business as one of the country’s preeminent destinations for luxury dinnerware and gifts. By 1994, Bruce instituted GEARYS Gift Letter Wedding Registry, which remains the original by which all other registries are measured.

The grandson of Ruth and Fred, Thomas Blumenthal, became CEO and added white-glove customer service in 2003. The following year, Thomas opened GEARYS on Rodeo, adding Patek Philippe timepieces to its unrivaled inventory of Rolex. He followed up GEARYS on Rodeo with a Rolex boutique at the Westfield Century City Shopping Center in 2009. In 2012, the newly redesigned Gearys Beverly Hills on Rodeo Drive opened its doors. GEARYS newest location in Santa Monica is one of the largest Rolex boutiques in the United States.

Over the years, Gearys has given back to the community in many ways. The company has received several awards for its involvement.