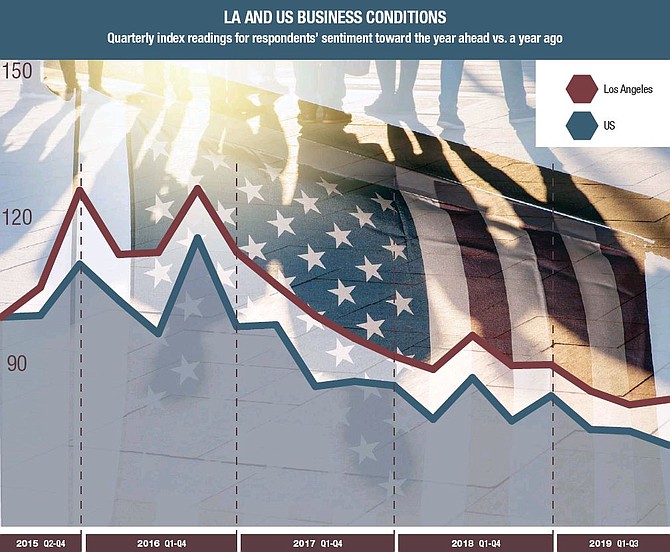 While that was up slightly from 82.1 in the second quarter, it’s the second-lowest reading in the four years since the institute started tracking consumer sentiment.

The survey showed an index of 73.9 for L.A. County consumers about business conditions nationally over the coming year. That was down from 76.7 during the second quarter and was the lowest reading in the survey’s four-year history.

The consumer sentiment indexes on the local and national economies are the first of their kind for Los Angeles. They are produced through an alliance between the Lowe Institute and Chapman University in Orange. A baseline of 100 was set in the second quarter of 2015 for the index, which debuted in 2017.

The third-quarter reading came from a sampling in late September of roughly 500 L.A. County residents who answered questions about their current economic situations, their outlooks for their own finances and spending in coming quarters, and their views of the local and national economies.

Cameron Shelton, director of the Lowe Institute and associate professor of political economy at Claremont McKenna, said consumers during the third quarter viewed the local economy as stable but were wary of national issues.

“Concern about the national political and policy climate is the key driving reason why these numbers overall are so low compared to when we started the survey in 2015,” Shelton said. “The concern is particularly acute here because of the prevalence of Democrats who hold sharply negative views about the current administration (in Washington).”

Shelton noted that during the late September survey period, House Speaker Nancy Pelosi, D-San Francisco, announced the House was beginning an impeachment investigation of President Donald Trump, who has long been unpopular in California.

This focus on national policy comes despite a relatively robust economy. Unemployment in L.A. County has hovered near a record low rate of 4.5% for most of the last year, according to the California Employment Development Department. Nationally, the unemployment rate was 3.5% in September, the lowest in 50 years, according to the Bureau of Labor Statistics.

“Both the local and national job markets are really, really strong,” Shelton said. “But the strength of the national economy doesn’t seem to be registering with L.A.-area consumers we surveyed.”

Shelton added that the strength of the local market is registering with local consumers but only enough to halt the slide in confidence.

One unusual feature of the third-quarter survey: The index reading of 76.5 for local consumer confidence that next year will be a good time to buy a car. That’s down from 80.1 in the second quarter and is a record low for the survey.

“That’s quite extraordinary considering interest rates have been trending down, and consumers are bullish on their ability to find a new job if they need to,” Shelton said.