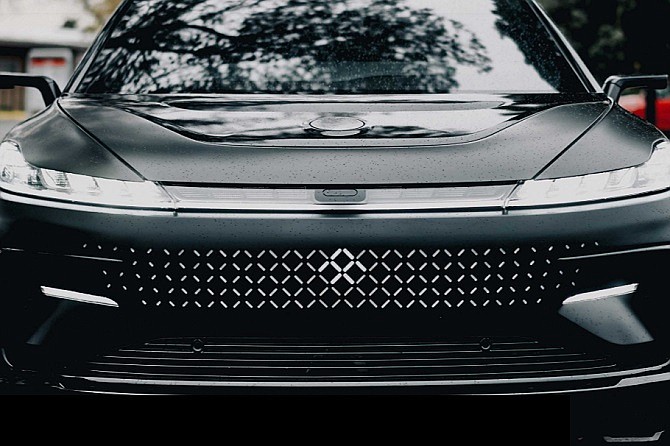 Five years later and saddled with $3.6 billion in debt, the beleaguered Yueting filed for Chapter 11 bankruptcy protection in a Delaware court Oct. 14, putting the company’s future in question.

The filing is intended to clear Yueting’s massive debt and help turn his company around. But analysts and former employees are skeptical.

“We haven’t seen anything to convince us that Faraday Future is well positioned in the market,” said Pitchbook Data Inc. analyst Asad Hussain. “The company has historically been mismanaged and is currently facing difficulty raising much-needed financing.

Yueting plans to use his ownership stake in Faraday Future parent company Smart King Ltd. to set up a trust to pay back debts.

But Faraday won’t be worth anything unless it starts making cars quickly.

The company is confident it can. “Faraday’s operations will not be disrupted

by Yueting’s personal bankruptcy and in fact the FF 91 program has progressed consistently even with the funding issues we have had recently,” Faraday spokesman John Schilling said in an email. The company has been building test units and it plans to produce the FF91 next year, he added.

Yueting’s ambitious plan ends with Faraday going public by mid-2021. But before the company can get there, it has to convince investors it can actually create the vehicles. Yueting says the company needs $850 million to start production.

Bankruptcy filings lay out plans for the company to secure the funds by January 2020. Yueting said he believes that if that happens, Faraday can deliver 100 FF 91s by 2021 and then he can take the company public.

But raising capital isn’t easy. “Public equity investors today are hesitant to own highly capital-intensive, deeply unprofitable business models at this late stage of the economic cycle,” Hussain said. “Those willing to invest in the electric vehicle space are increasingly selective with where they deploy capital.”

At the same time, Faraday still has to build out its Hanford plant in northern California where it seeks to manufacture 10,000 cars a year. It also must settle debts, do a battery of testing and get sign-off from regulators. The factory itself has 90% of its equipment on order.

“If things had gone to plan, we would have a mainstream car by now,” said Faraday co-founder Nick Sampson. “We should have been in production with FF 91 by early 2018.”

Sampson left the company in October 2018 during a time of widespread layoffs and salary cuts. Former employees said Faraday had been in turmoil under Yueting and that his management style scared off key investors, slowing Faraday’s ability to produce cars. At the same time, the electric vehicle market was heating up.

A rush of investors plunged cash into the EV market recently. Venture capitalists, anticipating an explosion in sales, poured a record $10.9 billion into the sector in 2018. By 2025, the market is projected to hit $440 billion as car batteries get cheaper and emission rules get tougher, according to Hussain.

The market is even bigger in China where hundreds of startups are taking root and Faraday hopes to launch a “dual-market strategy” that includes producing 300,000 electric vehicles — a new model dubbed the V9 — each year in China starting in 2020.

In some ways, Faraday seemed ahead of other competitors. Last year, it scored a $2 billion first-round investment led by Evergrande Health Industry Group Ltd., a subsidiary of China Evergrande Group controlled by Chinese billionaire and developer Hui Ka Yan.

Evergrande took a 45% stake in Faraday, which was then valued at $4.4 billion, but it didn’t take long for Evergrande to grow concerned about Yueting’s management practices.

“The biggest issue was around how he controlled the company and the way that (investors) could see that by that point sufficient progress wasn’t being made,” said a source familiar with the company. “It’s not just all about having fancy ideas up front or all about the internet. Cars are a very real product.”

After giving Faraday $800 million last year, Evergrande renegotiated its agreement and reduced its stake in the carmaker to 32%.

Yueting, a serial entrepreneur and once one of China’s richest men, has bankrolled his ventures by heavily leveraging equity in other companies he founded.

The company was designed to sell TVs and smartphones but soon spawned numerous offshoots, each propped up by the other’s equity.

LeEco eventually collapsed as Chinese creditors froze the company’s assets in 2017 — a move that had a snowball effect on Yueting’s finances.

That same year, Yueting’s latest flagship venture, one that promised to produce a sleek futuristic-looking vehicle, was being touted to the media.

Faraday billed the FF 91, a full-size luxury crossover EV, as a car that could travel a staggering 378 miles between charges. And the company vowed the car would be equipped with an assortment of sensors for automation and facial recognition.

But development of vehicles is hard, especially for startups. It’s a capital-intensive process, and margins are low.

Faraday competitor Dyson Ltd., which makes $400 hair dryers and $700 vacuums, announced earlier this month that it had scrapped plans to build an electric car because the company couldn’t come up with a commercially viable vehicle.

Some believe the electric car startup market is beginning to show signs of strain beyond Dyson’s pullout.

Faraday’s original price point for its FF 91 vehicle was roughly $180,000. Major auto manufacturers have managed to achieve success with lower-cost options, such as the Nissan Leaf and the Chevy Bolt, which retail from $25,000 to $40,000 on average. Tesla remains the top-selling EV though it only occupies a sliver of the U.S. auto market.

And questions around Yueting remain. But Schilling said these problems should not hurt the company.

“YT’s personal bankruptcy will not result in liquidation of Faraday’s assets,” he said. “In fact, YT intends to continue working with his team at Faraday in order to maximize both the value of Faraday and recovery for his creditors.”

Locally, Faraday faces competition from Torrance-based Canoo Inc., which showed off a prototype of its own electric vehicle on Sept. 24 and plans to start production by early 2021. Canoo, initially named Evelozcity, was founded by several former Faraday executives, including Canoo Chief Executive Stefan Krause.

Faraday also competes with Byton Ltd., the Chinese startup co-founded by Carsten Breitfeld, who left Byton in September 2019 to assume the role of chief executive at Faraday.

Byton plans to produce three types of vehicles, selling for $45,000 on average, and will launch first in the Chinese market by mid-2021 before using its Silicon Valley office to boost business in the United States.

Former Faraday engineering lead Sampson said stiff competition from premium automakers like Porsche and Jaguar have made the market even more competitive.

“(The FF 91) is not where technology should be today,” Sampson said. “And the biggest issue is its relevance as a very expensive premium product.”

The comment is a departure from Sampson’s optimism in 2017, when he unveiled the prototype of Faraday’s FF 91 to the world in Las Vegas.

At the time, he told onlookers they were “about to witness day one of a new era of mobility,” and promised the company would soon “show the first of a new species.”

To bring the FF 91 and a sports car called the FF 81 to the streets, the company will need “significant capital” and, according to filings, will “incur substantial costs in setting up, equipping and improving its manufacturing facility in Hanford, California, to start production.”

Even if that happens, it’s unclear how much of a dent Faraday can make in the electric vehicle market. “It’s relevance today may not be as strong as what it was a few years ago,” Sampson said.