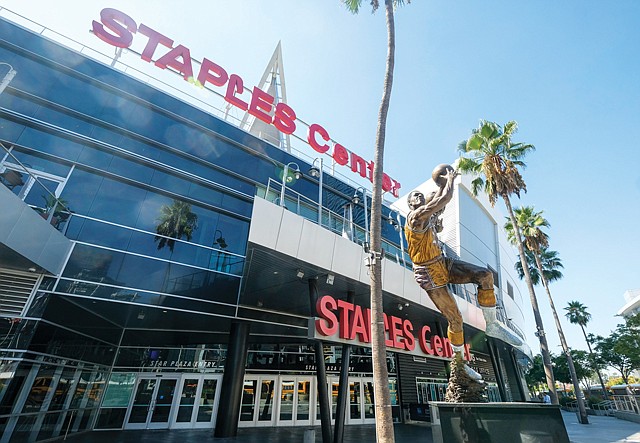 Standing Tall: Staples Center hosts as many as 250 events a year. Photo by Ringo Chiu.

It was an audacious opening for one of the most ambitious projects in Los Angeles’ history.

On Oct. 17, 1999, Bruce Springsteen and the E Street Band christened Staples Center with a marathon performance, the first show of a four-night stand to open the glistening arena.

Today, 20 years later, those who helped nurture Staples Center from a bold vision to a thriving centerpiece of downtown’s renaissance are still awed by the achievement. And the results.

“There’s no question Staples Center was a transformational project,” said Carol Schatz, who retired last year after 22 years as president and chief executive of the Downtown Center Business Improvement District. “Its impact on downtown was revolutionary in terms of the life it brought to the rest of the area.”

The Downtown Center Business Improvement District estimates that in the two decades since Staples Center opened, the facility has had a $32 billion economic impact on the city.

Staples Center was the brainchild of Colorado-based investor Philip Anschutz and L.A. real estate czar Edward Roski Jr., who bought the National Hockey League’s Los Angeles Kings out of bankruptcy in 1995 for $113 million.

While they weren’t necessarily big hockey fans, Anschutz and Roski were intrigued by the idea of building a new home for the team, one they could privately finance for a projected $244 million — the final bill would reach $375 million — if the L.A. City Council would cooperate.

In 1996, Anschutz and Roski entered into a partnership with the city, led by then L.A. Recreation and Parks Commissioner Steve Soboroff, to look for a location downtown. After a two-year, give-and-take process with L.A. City Council members, the city finally agreed to the plan, and construction began on the nearly 1-million-square-foot arena. Architect Ron Turner at Gensler did the design work for the project, which was completed 18 months after the 1998 groundbreaking.

Staples Center became the first phase of a 10-year development that led to the $2.5 billion L.A. Live entertainment complex, which includes the Grammy Museum, a 54-story Ritz-Carlton/JW Marriott high-rise hotel, a super-sized ESPN Inc. broadcast center and a 14-screen multiplex.

Impact from the project was felt far beyond the corner of Figueroa Street and Chick Hearn Court — which was renamed from 11th Street shortly after the legendary Lakers announcer’s death in 2002. Staples Center spawned new and renovated hotels, residential development, restaurants, shops, and offices in the adjacent area.

“The area was dirty — it had graffiti, and I would walk the streets around there talking to myself, saying, ‘Schatz, this ain’t coming back,’” she said.

Today, Staples Center hosts as many as 250 events a year. It’s the sports home of the National Basketball Association’s Los Angeles Lakers and Los Angeles Clippers, the Women’s National Basketball Association’s Los Angeles Sparks and, of course, the Kings. The arena has been the site of a number of notable events, from multiple Grammy Awards shows to the 2000 Democratic National Convention and the 2019 memorial service for rapper Nipsey Hussle.

Anschutz Entertainment Group Inc. is expected to announce millions of dollars’ worth of upgrades and renovations to the arena soon.

Lee Zeidman, president of Staples Center, L.A. Live and Microsoft Theater, has had a front-row seat for the Staples Center’s journey. He ran the Forum for the Buss family before becoming the first person hired by AEG for the project in February 1998.

Zeidman remembers that then-Lakers owner Jerry Buss and then-Kings owner Bruce McNall were both considered candidates to build a new arena on the Forum property.

But Buss wasn’t interested, and McNall went through bankruptcy and legal difficulties. That’s when Anschutz and Roski stepped up, finding the property downtown and giving life to the multipurpose arena.

The Kings saw early benefits of the move. In 2000, the franchise was valued at $160 million by Forbes, a 47% increase from 1999 when the team was still in Inglewood. Today, the Kings are estimated to be worth $810 million.

“I understood the value of Staples Center because of how every performer, every athlete, wanted to say they played there, which is what they all used to say about Madison Square Garden in New York,” said Luc Robitaille, a longtime star with the Kings at the Forum and Staples Center. Today the Hockey Hall of Famer is the team’s president.

“When you have (more than) 150 suites bringing in revenue, sponsorships bringing revenue, all of that has had a tremendous impact, not just on the Kings, but the whole arena,” Robitaille added. “What’s also amazing is how Staples Center was built right from the start, and how they invest $10 (million) to $20 million every year to refurbish and make it look new.”

Robitaille was one of the star athletes who attended the 1998 groundbreaking ceremony, joining Shaquille O’Neal and Kobe Bryant of the Lakers.

Robitaille points to a then-unprecedented 20-year, $116 million naming rights deal with Massachusetts-based office supply company Staples Inc. for giving the venue a big leg up. “That was a gamechanger,” he said. “That positioned us into a different place no one else saw before.”

In 2009, the deal was revised to give naming rights to Staples in perpetuity.

Another factor that positioned Staples Center for success was the L.A. City Council’s passage of the Adaptive Reuse Ordinance in the spring of 1999, about six months before the arena opened. The law allowed the conversion of commercial buildings built prior to 1974 into residential and retail business, spurring downtown’s revitalization.

She also cites a lesser-known player, John Semcken, an executive at Roski’s Majestic Realty Co., as a key player. He did much of the community canvasing to establish the current Staples Center site after initially targeting a piece of land west of the 110 Freeway on property that was home to Unocal Corp.’s former headquarters.

“Staples Center was critical to our ability to attract and retain major events to the city of Los Angeles,” said Schloessman. “If Staples Center wasn’t here, our organization wouldn’t be on the map.”

10 Out of 20: Unforgettable moments from two decades at Staples Center

Over 20 years, Staples Center has played host to National Basketball Association and National Hockey League championships, blockbuster concerts and a myriad of other events. Here’s a look at 10 of the arena’s most memorable moments.

Feb. 23, 2000: The Grammy Awards come to Staples Center for the first time. Jennifer Lopez steals the show with her iconic low-cut green dress.

July 7, 2009: Twelve days after Michael Jackson’s death, Staples Center is the site of a memorial service for the King of Pop, featuring performances by Mariah Carey, Stevie Wonder, Lionel Richie and Jermaine Jackson.

Aug. 21, 2015: A banner reading “Most Sold Out Performances” is unfurled in the Staples Center rafters to celebrate Taylor Swift’s 16th sellout at the arena.