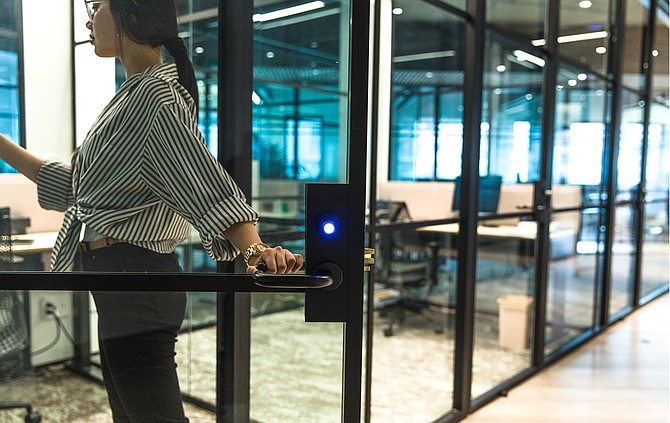 One of Nexkey's smart lock office entry systems in motion.

Upfront Ventures led a $6 million Series A round for smart lock and keyless entry developers Nexkey Inc. that was finalized Oct. 10.

Nexkey will use the funding to expand its sales and marketing teams, streamline its manufacturing process and develop its keyless technology, Chief Executive Eric Trabold said.

“There are more than 300 million commercial doors in the United States and Nexkey is the only provider that is universally compatible,” Upfront Ventures Partner Aditi Maliwal said in a statement.

“Today's access control solutions don't align with the modern workforce’s needs for flexibility and convenience," Maliwal added. "It's time for change and Nexkey is uniquely positioned to drive that change.”

Nexkey’s technology can synchronize electric doors to its platform or insert a “smart cylinder” into an existing mechanical lock. Both allow users to unlock doors with the Nexkey mobile app instead of physical keys.

The company said it primarily targets clients that own properties and “have a constant influx of new tenants,” including coworking spaces, gyms and real estate offices.

Nexkey reports it has 8,500 active users and recently installed its technology in 32 private offices operated by San Francisco-based coworking startup Canopy. Trabold said "we plan to continue to bring Nexkey outside California to the rest of the U.S." in the near future.

“The access control market is ripe for disruption and our Series A round will help us become the new standard of access,” Trabold said in a statement.