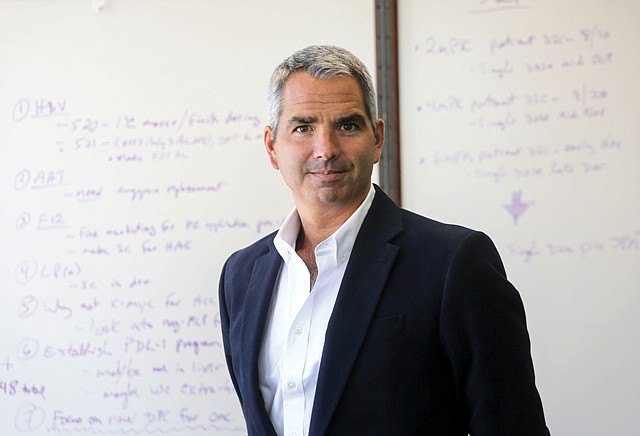 The company’s most promising drug, a hepatitis B treatment that silenced a gene causing the disease, had been placed on hold by the Food and Drug Administration over concerns about liver toxicology.

Arrowhead abandoned that drug and several others it was developing, and laid off nearly one-third of its employees.

Its stock price went into free fall, closing on Nov. 30, 2016, at $1.14. Analysts were expecting the shares to move into penny stock terrain.

Arrowhead Chief Executive Christopher Anzalone told analysts at that time not to expect to hear anything from the company over the next year, “and you probably won’t like us.”

As of Nov. 21, Arrowhead stock is trading at a record high of $49 a share. It has a new slate of drugs that use slightly different molecular technology to silence disease-causing genes and is targeting a range of different diseases.

Several of those drugs are now going through clinical trials with promising early results.

The company also inked a licensing deal in 2018 with Janssen Pharmaceuticals — a division of Johnson & Johnson Services Inc. — that could be worth up to $3.7 billion. That deal proved to be a significant vote of confidence in Arrowhead’s technology.

To engineer this remarkable turnaround, Arrowhead took a big gamble. Instead of trying to develop a specific fix for the toxicity problem cited by the FDA, it dropped an entire line of drugs it was developing and essentially started over.

While it’s not uncommon for a pharmaceutical company to drop one or more drugs after receiving negative clinical test results or an adverse decision from federal regulators, it’s rare that a company can have a new slate of drugs ready within a year or two.

According to Anzalone, what Arrowhead went after was a new “targeted RNA” approach that allowed each drug to silence genes for specific diseases. (RNA, or ribonucleic acid, is a molecule that, among other things, can convey genetic information).

“We found a way to get the drug into the cell without adding a whole bunch of new chemistries on it,” Anzalone told the Business Journal. “That meant less chance for complications and toxicity.”

He said Arrowhead had been developing this approach for several years, but after the FDA voiced concerns about toxicity, the company went all-in on this new tack. The money was available for this strategic shift because Arrowhead had just inked a deal with Thousand Oaks-based Amgen Inc. that provided an upfront $10 million payment for the right to test a drug Arrowhead had developed.

While that deal was crucial, last year’s agreement with Janssen Pharmaceuticals provided an even bigger boost.

Under terms of the more recent deal, Janssen will continue clinical development of Arrowhead’s hepatitis B drug candidates and seek to license them. In return, Janssen is giving Arrowhead three drug candidates outside of Janssen’s major drug pipeline, paying $250 million up front and up to $3.7 billion total for Arrowhead to develop and seek licensing for those drugs.

“This was an absolutely critical deal for us,” Anzalone said. “We knew a large partner would be helpful in the development of a hepatitis B drug. And it gave us access to enough capital that we could look at our own drugs and begin to commercialize the drugs entirely on our own.”

This fits nicely into what Anzalone described as the company’s new strategy: to develop as many drugs as possible using its targeted RNA technology.

“The breadth of this technology is amazing,” Anzalone said. “There are many diseases that can be alleviated by turning down or turning off a single gene. We can bring this technology to a variety of tissues within the body.”

As of November, Arrowhead has five drugs in various early stages of clinical studies using its targeted RNA technology platform.

In coming months, Anzalone said more drugs would be announced, including one to treat renal cell carcinomas and one targeted at lung diseases such as cystic fibrosis.

Since digesting the news of the October 2018 Janssen deal, investors have flocked to Arrowhead, driving its share price up more than three-fold.

But Arrowhead’s stock also had quite a run-up in the months and years preceding the late 2016 meltdown.

“None of its (Arrowhead’s) pipeline products have even begun phase III clinical trials, meaning there is still a long, long way to go before commercialization becomes a reality,” Edmund Ingham, a London-based consultant who follows biotechnology companies, wrote. “There is plenty of promise, but it’s still unrealized and there will doubtless be bumps along the road.”

Analyst Kumar, however, sees reasons for optimism and support for the stock run up.

“The company now has more experience with clinical development, and they are working with a broader array of drugs so that the risk can be spread if one of the drugs encounters adverse clinical trials or FDA actions,” he said. “What’s more, three years ago, the company had an Achilles heel with its drugs: They all used peptides that could pose toxic impacts to red blood cells. That overarching issue has now been addressed.”