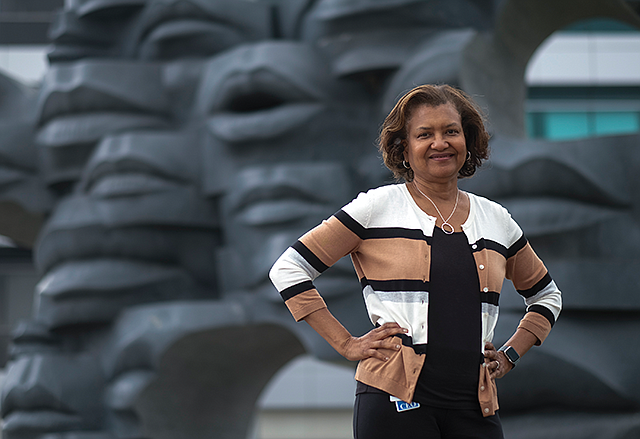 Elaine Batchlor didn’t set out to win awards when she took on the role of founding chief executive at Martin Luther King Jr. Community Hospital. But after the $300 million South Los Angeles facility opened in 2015, honors began to roll in anyway. The 131-bed private hospital — a LEED Silver certified facility paid for by Los Angeles County, run by a nonprofit foundation and staffed by UCLA physicians — has won technology awards for digital connectivity and for its electronic medical records system. It was also awarded $20 million in grants this year to recruit top doctors to work in its impoverished neighborhood. And in February, Batchlor won a prestigious James Irvine Foundation Leadership Award for delivering quality health care to underserved residents of South L.A. Batchlor and MLKCH’s achievements come in stark contrast to the South L.A. medical facility’s predecessor, Martin Luther King Jr./Drew Medical Center, which was plagued by allegations of preventable patient deaths and mismanagement until it shuttered in 2007. Batchlor, a trained doctor who spent eight years as chief medical officer at L.A. Care Health Plan before joining MLKCH, talked with the Business Journal’s Dana Bartholomew about how far the hospital has come and where it’s going next.

What was the medical care landscape in South Los Angeles when you signed on to oversee development of the new hospital?

South L.A. is a low-income community, medically underserved for decades. When we came on board to open a new hospital, the community had suffered the closure of the old King/Drew Medical Center, an important source of care. So the county set two goals: to open a multispecialty outpatient center and to open a new acute care hospital. The area that we serve is missing about 1,200 physicians. Which means that in addition to missing a lot of primary care and specialists, it’s really missing other health care services like urgent care, retail clinics, skilled nursing facilities. You name it, it doesn’t have it.

Your hospital has won numerous awards for its design and digital services. What was your vision?

Our overarching goal was actually to improve the health of the community. And the hospital was the first phase of that objective. The hospital is a critical source of acute care. It’s an anchor institution for the community that has stimulated economic development. And it was really intended to be the hub in a larger, more integrated system of care to help people stay healthy.

Your emergency department serves a critical role in the Willowbrook neighborhood.  How many patients did you expect to serve when it opened, and how many does it serve now?

Our emergency department was initially designed to serve about 45,000 visits a year. We’re now at over 100,000 visits a year, which makes us one of the busiest emergency departments in the county — busier than some hospitals that are three or four times our size. The volume of patients that we’re seeing is a reflection of the longstanding, unmet need in the community.

What are the economics of a hospital with a large Medi-Cal patient population?  Are you in the black?

There are challenges to running a health care organization in a low-income community that is largely dependent on Medicaid, which amounts to about 70 percent of our patient revenue. We have significant supplemental funding … that comes through the county, the state and the federal government. Our hospital’s open to serve everyone in the community, regardless of their income, their insurance, or their immigration (status). And we are in the black. We have about $300 million a year in revenue, with similar expenses.

Tell us how your hospital came to be a specialist in IT and telemedicine?

We created a vision right from the beginning that would enable us to use information technology to capture patient information, share that information with clinicians, provide alerts to clinicians, share information outside of the hospital. We use … digital scanning for distribution of prescription drugs. That goes directly into the system, but it also maintains patient safety while achieving the highest level of IT use in a hospital. Since we have a deficit of physicians, we made sure the entire hospital was wired for telemedicine. It gives our patients access to the best doctors in the city.

Are there any plans for the old King/Drew? How might MLKCH expand?

The county is converting the old hospital building into a comprehensive behavioral health center to include psychiatric services, rehab for substance abuse, sobering center. I can’t say much about our possible expansion, but if you look at our emergency department you can see we need more space.

Second to getting the hospital opened, the team of people I have built here, we have built here. People who come here are very capable, motivated by the mission of the hospital, and by service to the community. It really is a passion for the people who work here, and they illustrate that every day in how they take care of our patients. The biggest challenges are the deficit of health care infrastructure in the community.