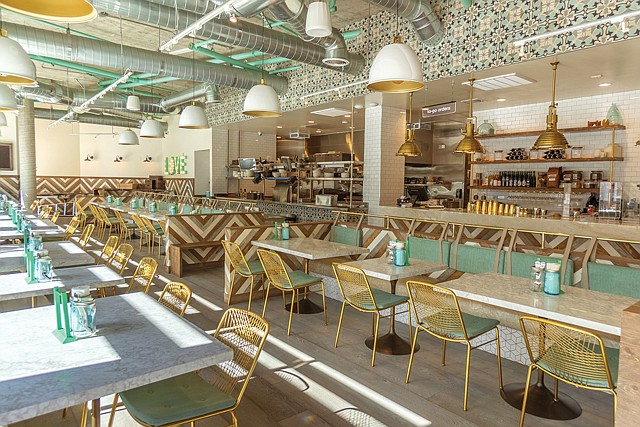 When they pivoted to the fast-casual restaurant business in 2016, opening the first of their Tocaya Organica eateries, Berman and Manaseer employed the same strategy.

The airy, plant-filled restaurants feature reclaimed wood, colorful tiles and lots of windows. Outside the West Hollywood location, the word “LOVE” hangs over a vine-covered wall ready for people to snap photos. Manaseer, who deejays, even created a special music mix that Berman calls “a mix of tropical, deep house” for the restaurant.

“We are really about curating the experience,” Berman said.

That may seem odd for the kind of restaurant where people don’t usually linger. In fact, Berman boasts, about a third of Tocaya’s sales are to customers who don’t even set foot inside — ordering instead through third-party delivery services like Uber, DoorDash and Postmates.

But he said the scene is part of the chain’s marketing strategy. Berman and Manaseer’s hospitality firm, Madera Group, doesn’t spend much on traditional advertising but relies instead on the multiplying effect of its own customers posting images to social media from its photo-friendly locations. “Those are things that people post organically and that widens the network,” he said.

The look and strategy are starting to catch on. Since 2016, Madera has opened 11 Tocaya Organica restaurants and secured $30 million in investment. Madera plans to have 19 of their fast-casual shops operating in Southern California and Arizona by the end of this year, with at least 41 more locations across the country by 2023.

Berman and Manaseer knew it was time to try something new when they found themselves skipping out on their own 2016 New Year’s Eve bash, weary of the pulsating, alcohol-fueled, nightlife circuit.

“When you don’t want to go to the places you are running, it’s a good time to get out,” said Berman. “It was no longer our scene.”

The creators of West Hollywood restaurant Toca Madera, Spanish for “knock on wood,” and San Diego’s now defunct Cake nightclub holed up in Manaseer’s Tahoe home and came up with the idea for Tocaya Organica, an organic Mexican food chain that competes with casual restaurant chains like Mendocino Farms Inc.

They opened the first location in Venice a few months later with $120,000 of their own money.

The pair said they were inspired by a phrase they’d jotted on a dry-erase board: “how to save the world one taco at a time.” The name Tocaya Organica roughly translates in Spanish to “organic namesake.”

Tocaya’s menu is vegetarian with each dish offering the option to add meat, cheeses and other components.

The future of fast-casual

In Los Angles, fast-casual restaurant traffic has been on the upswing, rising 3 percent in the year ending in January, according to market researchers NPD Group Inc./CREST. Nationally, traffic ticked up 1 percent. But growth is slowing as the sector matures, research from Chicago-based Technomic Inc. shows.

“We have seen a number of restaurant companies with projection of spectacular growth, and executing it is real hard,” said Kurt Schnaubelt, a restaurant industry adviser at New York-based AlixPartners.

Fast-growing companies often find they get stuck with overpriced real estate, Schnaubelt said. Making it more difficult, he added, many California restaurants that source produce locally find when they add locations outside the state, they can’t find the same quality of ingredients from new suppliers. Plus, the fast-causal market is growing more crowded.

But Schnaubelt said Tocaya’s highly customizable menu — which caters to vegetarians but allows carnivores to add meat to most items — should help the chain appeal to a wider audience and could give it staying power.

“Frankly, nonvegetarians enjoy a vegetarian meal from time to time,” he said. “It’s probably a trend into the future.”

Berman acknowledged the difficulties ahead.

Madera Group isn’t profitable as the success of its store locations hasn’t been enough yet to cover the group’s overhead costs, Chief Financial Officer Mikey Tanha said. Part of the reason for the company’s losses are its aggressive growth goals.

“We think they are tastemakers,” said Saif Mansour, managing partner at Breakwater. “There’s a lot of alternatives for fast casual, but Tocaya distinguished itself.”

Mansour added, “As opposed to going to Chipotle, you feel like it’s fine dining.”

Berman said Madera Group’s performance has encouraged the company to go out for another round of investment this year.

In the meantime, the company is working on other tweaks to their operations, including building a smartphone app for ordering, so customers don’t have to stand in line.