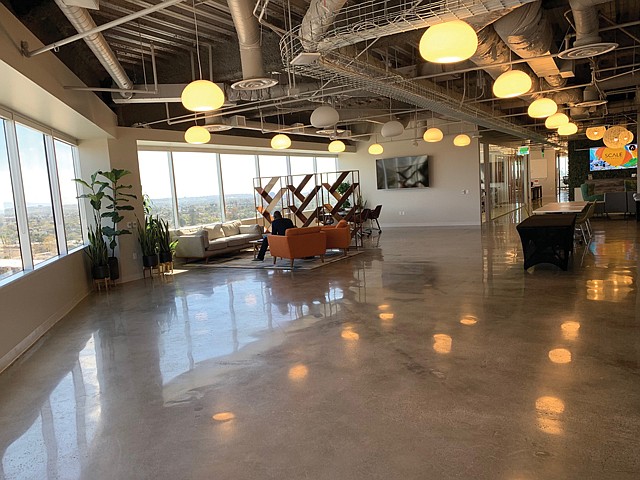 Scaling Up: New incubator run by ScaleLA opens in Palms in West L.A.

A new work space operated by ScaleLA Inc. — known as the 10th Floor — opened earlier this year as a 15,000-square-foot incubator for digital health and medical device startups.

“Our goal is to turn L.A. into the next hub for health care innovation as it relates to small-business startups,” said Taylor McPartland, ScaleLA’s founder and chief executive. “It’s going really well.

The company has built its business on collaborative ties between bioscience startups, bioscience investors, local government entities and research hospitals. Its 24-hour shared workplace takes up an entire floor near the top of a 12-story high-rise on Sepulveda Boulevard overlooking the 405 Freeway in Palms.

The ScaleLA workspace joins nearly a dozen bioscience incubators across the region, many of which contain shared research laboratories and equipment. The 10th Floor, in comparison, limits services to office space — no labs or equipment — with up to four weekly panels to offer startups a range of legal, financial and investment support.

ScaleLA memberships start at $50 a month for a virtual address allowing one visit a month to a $3,000-a-month office suite for four.

Its 30 member companies include three that McPartland said were close to inking terms for funding rounds of $1 million or more. They include Oklahoma City-based Linear Health Sciences, a medical device firm that developed a new safety valve to reduce the risk of accidental uncoupling of IV catheters.

McPartland, who has a tech background, helped found FilmBreak, a digital marketing firm based in Santa Monica, which became CrowdfundX, a crowdfunding service for companies and content creators, for which he serves as an adviser.

He initially founded ScaleLA in 2016 as a nonprofit foundation to give disadvantaged Angelenos a helping hand in starting new businesses.

Los Angeles County health care know-how has now made its way to Sacramento.

Mark Ghaly, a South Pasadena pediatrician and a deputy director of the county’s Department of Health Services, was appointed March 6 to lead the California Health and Human Services.

“Mark’s experience, passion and vision will be instrumental in driving California to a healthier future,” Newsom said in a statement.

Ghaly, who worked in county health services since 2011, served as its director of health and social impact since last year.

In his role as a public health administrator, he helped lead an initiative to provide coverage to 140,000 previously uninsured residents and helped launch what the county claims is the nation’s first mental health and well-being campus at Los Angeles County and USC Medical Center.

Los Angeles-based bioscience companies were also on the move, but toward higher profits.

“2018 was a breakout year for STAAR,” said Caren Mason, one of the few female chief executives in the medical device industry, in a fourth quarter and 2018 year-end report released Feb. 21.

The 34-year-old firm has also seen record overall sales, including a 48 percent increase in orders to $101 million for its intraocular lenses. The sales increase was driven by new clinics opening across Asia and Europe, according to Staar’s year-end report.