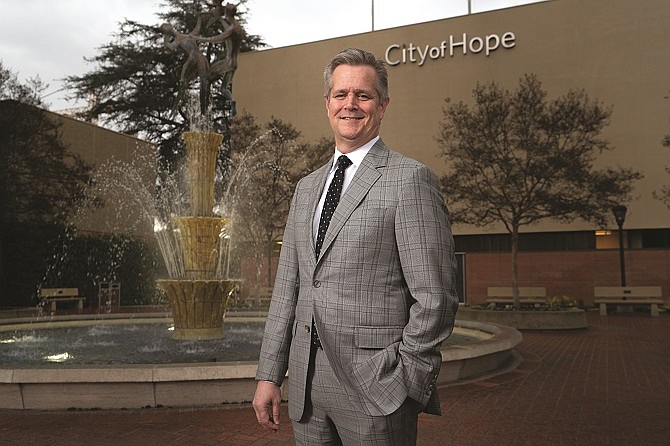 City of Hope National Medical Center had tried many times to pry Robert Stone away from his Century City law practice.

But it wasn’t money or a plum position that ultimately convinced the cancer hospital’s now-chief executive to join the medical center in July 1996.

“There was a nurse, pulling a red wagon, with what looked like a 3-year-old kid with his mom pushing the IV pole, and she was silently crying,” Stone recalled. “And I signed up.”

That was nearly 23 years ago − Stone initially signed on as associate general counsel − and he’s gone on to help remake City of Hope, becoming chief executive in 2014.

His strategic vision has helped expand the 106-year-old health care system, growing access to patient care and advancing the fight against cancer and diabetes.

City of Hope has also expanded from two to 29 community practice clinics across Southern California while doubling its investment in internal research.

The hospital also plans a $1 billion expansion of its main Duarte campus, in addition to a $300 million hospital in Orange County.

“City of Hope does terrific work,” said Jennifer Bayer, vice president of external affairs for the Hospital Association of Southern California, a downtown-based trade group. “We’re very proud to have them as part of our network of hospitals.

“Mr. Stone is a terrific leader and an asset to health care in Southern California.”

Stone, who grew up in Whittier, had lived his whole life near City of Hope, but until he set foot on the hospital campus, he had never known anyone who was treated at the 217-bed cancer hospital.

He attended the University of Redlands where he earned a bachelor’s degree in political science. The 6-foot-3-inch athlete also ruled its basketball court, racking up 1,077 career points while being named to the Academic AllAmerica team.

After earning a law degree at the University of Chicago, Stone returned to Southern California to become a securities litigator for Christa & Jackson, a law firm based in Century City.

After three years in private practice, he was so moved by the boy with cancer at City of Hope that he accepted an offer to join its legal team – and sign on to a century-old humanitarian mission.

Since then, he has held 11 administrative roles, from general counsel to corporate secretary to chief strategist and founding president of its nonprofit medical foundation.

He was named City of Hope president in 2012, and two years later, added chief executive to his titles, taking charge of strategy, finance and operations.

“It’s a way of combining challenging work with people I like and respect − but with a deeper meaning,” said Stone, 50, whose pale blue eyes contrasted with his gray windowpane suit during a recent visit. “People who come here and succeed are about serving the mission − making themselves smaller than the greater good.

“Medicine has some people who are in it for the glory, and for their own self-advancement,” he said. “Those people don’t do well here.”

With Stone at the helm, City of Hope embarked on a major expansion in the wake of federal health care reform.

The hospital, which has a budget of $2.4 billion, pushed beyond the 110-acre Duarte campus that once served as a rustic sanitarium for tuberculosis patients, with a particular focus on expanding its outpatient clinics.

In the past eight years it has expanded from just two clinics in South Pasadena and Lancaster to 29 health clinics that stretch from the Antelope Valley to Palm Springs, with new clinics set to open in Orange County. A $14 million cancer clinic is slated to open this year in Newport Beach, and a $300 million cancer center is expected to open in 2022 in Irvine.

It also added a genomics research institute in Arizona while hospital funding for internal research climbed to nearly $300 million this year from $131 million in 2014.

The new facilities have meant a surge in patients, which requires more physicians and staff. The number of unique patients rose to roughly 80,000 last year from around 25,000 in 2014, Stone said.

The number of City of Hope employees grew 41 percent to 6,200 workers during the same period while the number of doctors in its medical group rose to 325 from 120 physicians.

A $1 billion campus expansion that began last year will include a new medical office now under construction, plus new parking and clinic space to be added over the next two decades.

Others credited Stone for City of Hope’s recent surge in growth.

“He has a great reputation,” said Tom Mone, chief executive of One Legacy, a downtown-based organ procurement agency.

“The program has done extremely well. City of Hope has grown in its patient care, in its research, and has been one of the leading cancer research institutions in the country.”

Outside Stone’s executive office hangs a black-and-white gallery of photos of the hospital dating back a century. Inside his office, behind his desk, sits a bronze bust of the late Ben Horowitz, its chief executive for more than 30 years.

Stone said he spent many hours chatting with Horowitz, who taught him what it meant to serve people at the most vulnerable moments of their lives.

What that means is delivering tomorrow’s discoveries for the people who need them today—that City of Hope’s business is hope itself.

“He taught me to put patients first,” Stone said. “I walk the campus every day. I eat in the cafeteria. I meet with patients and families. That’s what gives me energy. “At the end of the day, we’re here to serve people. And if you don’t talk to them, you won’t know how to serve them.