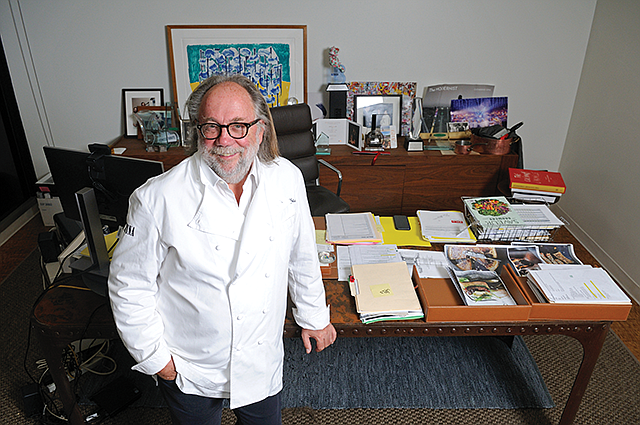 For more than 20 years, German-born chef Joachim Splichal, founder of Patina Restaurant Group, staked out a big part of his public persona by catering the annual Emmy Awards Governors Ball.

Like Austrian-born Wolfgang Puck, chairman of Puck Worldwide Inc. and the longtime chef for the Academy of Motion Picture Arts and Sciences’ Governors Ball, Splichal used a Hollywood awards show platform to enhance his standing as one of L.A.’s best-known chefs.

Splichal opened his first Patina restaurant in Hollywood in 1989, and he’s maintained a strong connection with this city’s arts and cultural institutions as well as the entertainment business.

“When I started 30 years ago, all the board members, they came to Patina on Melrose,” Splichal recalled during a recent conversation at Patina Group’s downtown offices. Those connections led to his restaurants at the Museum of Contemporary Art, the Los Angeles County Museum of Art and other cultural hotspots.

Delaware North Cos. Inc., a Buffalo, N.Y.-based food and hospitality company, acquired Patina Group in 2014. Splichal, who co-founded Patina Group with restaurateur Nick Valenti, retains the title of founder and chef. He also devotes time to his family owned and operated Domaine de Cala Winery, which launched in 2017. While the winery is located in France, the name Cala is borrowed from his current home.

Splichal likes his workplace to be hospitable and not overly formal. In his office, “I have a little art, there’s always a little bit of wine … food, photography, knives, aprons, chef’s jackets. Once in a while there’s a tie behind the door, but I never use it,” he said.

Splichal said he has watched L.A.’s restaurant business shift away from strictly European traditions to an array of international flavors and fusions over the years.

“When I came here years ago, fine French cuisine and fine Italian cuisine controlled the city, and it was maitre d’s who basically ran those establishments,” he said. “Now it’s all run by chefs, chef-entrepreneurs, and they become younger and younger.”

After 30 years in trend-hungry Los Angeles, Splichal says he likes to keep it simple. One of his favorite meals, he said, is just a steak with a side of farmer’s market vegetables, seasoned only with salt.

“You know, the most important thing is for any young chef who wants to be in the restaurant business, there has to be consistency,” he said. “Everything has to be top notch on a day-to-day basis. That’s how you stay around for 30 years.”