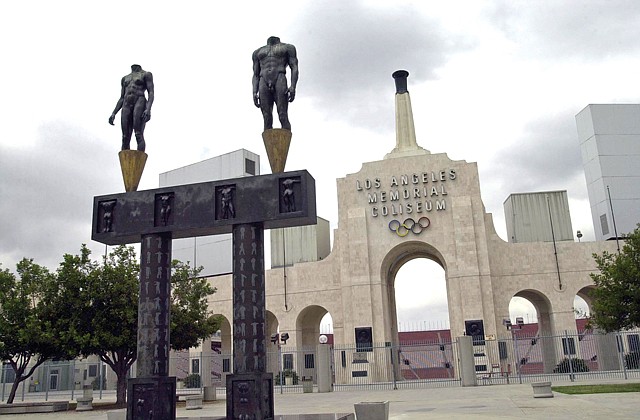 What’s in a Name: USC and United Airlines struck a deal to name the L.A. Memorial Coliseum’s field. Photo by Ringo Chiu.

L.A.’s sports venue landscape is getting an upgrade, with the Los Angeles Stadium at Hollywood Park taking shape and the Los Angeles Memorial Coliseum undergoing a $315 million renovation.

To fund those efforts, the stadiums have offered naming rights to the top bidder — a strategy billed as a way for companies to enhance their brand recognition.

But experts say the real return on naming investments may be more of a boost to vanity than a company’s bottom line. And in some cases, the strategy can backfire.

“In theory, the stadium receives a number of media mentions, which is a form of free advertising,” said Roger Noll, a sports economics professor at Stanford University. “But there is no evidence that naming rights are worth the cost.”

The deal replaced a proposed $69 million agreement that would have renamed the 98-year-old stadium the United Airlines Memorial Coliseum. Los Angeles County Board Supervisor Janice Hahn said that change would have been an insult to the World War I veterans who are honored by the stadium, turning the venue into a “marquee for sale.”

The new deal renames only the Coliseum’s field. USC and United Airlines wouldn’t say how much United paid for those narrower naming rights.

Companies are vying for the rights to attach their names to other L.A.-area stadiums. San Francisco lending company Social Finance Inc. was reportedly in negotiations to pay $20 million a year for naming rights to Inglewood’s new Los Angeles Stadium.

And facilities manager SMG Holdings Inc. announced June 11 that Citizens Business Bank Arena in Ontario would be renamed Toyota Arena for the next 10 years, under a partnership agreement with the Southern California Toyota Dealership Association. Financial terms of the deal were not disclosed.

As recently as 1990, only a handful of North American facilities had sold their naming rights, according to Michael Leeds, a Temple University economist. But by 2001, the majority of facilities in professional baseball, football, basketball and hockey carried the name of a company that paid for the naming privilege.

Leeds began studying naming rights partly because of what he called the “stadium sponsorship curse” of the early 2000s, in which several companies declared bankruptcy shortly after putting their name on a new stadium.

Leeds found no causal link between naming rights and bankruptcy, but he also found no economic gains from naming rights deals, such as an increase in company stock price or sales.

One of the “cursed” stadium sponsors was Chicago-headquartered United Airlines.

In 1994, the United Center was built in Chicago to host Chicago Bulls and Chicago Blackhawks games. United signed a $40 million deal to secure naming rights for 20 years — a deal that was extended in 2013.

The company’s name peppered sports pages and broadcasts in the late 1990s as the Bulls won three straight National Basketball Association titles. But the visibility failed to mitigate United’s worsening financial forecast, and in 2002 the company filed for bankruptcy.

United spokeswoman Maggie Schmerin said the company’s deal with the Memorial Coliseum would raise its profile in Los Angeles. “The state of California is a key market for us, and we are constantly on the lookout for ways to engrain ourselves in local communities,” she said.

The funds United paid for field-naming rights will go toward the Coliseum’s renovation, which is expected to be completed in August, said USC spokesman Eddie North-Hager.

“Now USC has to work with the different broadcast companies that produce our events and games,” to make sure they give the full, eight-word Coliseum name during broadcasts, North-Hagar said.

It’s unknown how broadcasters will refer to the Los Angeles Rams and Los Angeles Chargers new stadium at Hollywood Park in Inglewood. Trade publication Venues Now reported that the stadium was in talks with Social Finance for naming rights, but the Los Angeles Stadium and Entertainment District said there is no deal yet in place. A spokeswoman for the stadium declined to answer further questions.

Messages left with Social Finance were not returned.