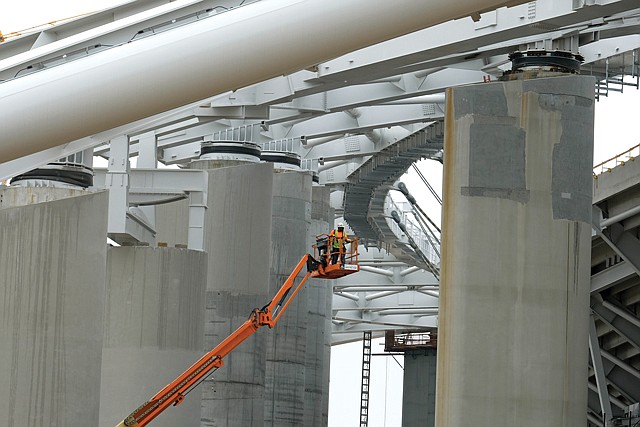 Dallas-based HKS Inc. is the lead architect and designer for the project. HKS also designed AT&T Stadium for the Dallas Cowboys and U.S. Bank Stadium for the Minnesota Vikings. Photo by Ringo Chiu.

On June 2, the Los Angeles Rams announced on Instagram that the team’s new stadium in Inglewood was 70% complete. That included the massive oval-shaped steel structure that will anchor the venue’s signature see-through roof.

The framework’s completion is a key milestone in making the stadium ready for the National Football League’s Rams and Los Angeles Chargers.

Assembling the 31 steel sections of the compression ring that supports the canopy was an enormous feat, according to information provided by the Los Angeles Stadium and Entertainment and District at Hollywood Park. The first section of canopy steel, weighing 2.2 million pounds alone, was installed in August.

AECOM and Turner Construction Co., the controlling contractors on the project, used one of the largest cranes in the world, according to LASED. The crane was operated by Netherlands-headquartered Mammoet, a subsidiary of SHV Holdings, to place the sections of the ring.

After delays caused by rain pushed back the stadium’s completion by a year, LASED says the project is on track for the start of the 2020 season. Workers at the site will now piece together the 309 sections that will comprise the clear plastic roof.

Pictures of the steel canopy structure were met with excitement and some controversy when the Rams posted them to social media. Rams fans said the canopy’s shape bore similarities to the team’s logo of a charging Rams head. That didn’t exactly come as good news to Chargers fans.

A spokeswoman said the stadium and entertainment district is not commenting on the canopy or its similarities to the Rams’ logo.

Inglewood City Council approves a proposal by Kroenke Sports & Entertainment and Stockbridge Capital Group to build a professional football stadium on the parcel. Dallas-based HKS Inc. is brought on board to design the stadium.

National Football League owners approve the Rams’ relocation from St. Louis to Los Angeles. Owners also grant the San Diego Chargers the option to move to Los Angeles and share the stadium with the Rams.

The Chargers announce plans to move to Los Angeles and to play their games at Los Angeles Stadium.

Los Angeles Stadium and Entertainment District at Hollywood Park announces the opening of the stadium, originally scheduled for the start of the 2019 NFL season, will be delayed until 2020 because of extensive winter rains.

Stadium is scheduled to open.