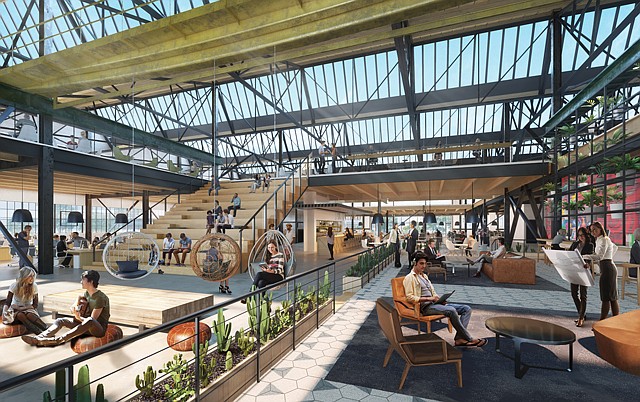 A new set of tenants is competing for space with ecommerce fulfillment and delivery operations in Southern California’s tight warehouse market.

Startups and companies in creative industries, local brokers say, are increasingly seeking warehouses that can be converted to office space. In part, that’s because space in a warehouse tends to cost less than space in a high-rise office building or professional campus.

“There are a lot of companies that are looking for less expensive alternatives to office space,” said Jones Lang LaSalle Inc. International Director Carl Muhlstein.

Plus, there’s the cool factor.

Hackman plans to keep some of the facility’s original industrial features. The firm may convert the freight elevators to conference rooms and keep old cranes and other equipment in the building. The project is slated for completion in July 2020.

“Buildings like this are rare to find,” Wiedner said, noting that older defense contracting facilities are good prospects for office conversions. “It’s such a fun opportunity to give a building a new life and better use.”

Andrew Berk, a principal at real estate company Avison Young, said newer companies and younger executives see creative office design as a way to attract talent. “Those employees are looking for authenticity, not a Class A, vanilla high-rise office where they have to get into a more sterile lobby and elevator every day,” Berk said.

All the rage again

Two decades ago, during the dot-com boom, there was a surge of interest in warehouse office conversions from up-and-coming technology companies.

Petra Durnin, director of field research for real-estate brokerage CBRE Group Inc., said many of those outfits were looking for “nontraditional office space,” much like the startups of today.

“The freestanding industrial product that is prevalent on the Westside created a perfect opportunity for these companies to really brand themselves,” Durnin said.

The trend petered out when the dot-com bubble burst. Now it’s making a clear comeback.

“Warehouse space is more and more coveted these days,” said Ann Hand, chief executive of esports company Super League Gaming Inc., which operates out of a warehouse in Santa Monica. “People like the culture and the way it feels more modern and progressive and skewed toward collaboration.”

Super League moved to its Santa Monica warehouse in early 2015, starting out in what Hand described as a “cramped, modest area upstairs.” In June 2016, the company expanded to a larger space in the same building.

“There’s something romantic when you’re a startup about staying in your roots,” Hand said.

The office still has a distinct warehouse feel with exposed ductwork, concrete floors and a roll-up dock door. On sunny days, members of Hand’s team open the roll-up door to allow in more natural light.

Awesome Office Inc., known as SnackNation, operates out of offices at the Hayden Tract, a former warehouse district in Culver City that has mostly been converted to office space. Alysse Burroni, director of brand marketing for the company, said many refer to the Hayden Tract district as “Creative City” — a home to startups, creative agencies and technology companies.

Technology giant Google has also gotten in on the industrial conversion trend on L.A.’s Westside. In 2016, Google leased the old airplane hangar in Playa Vista where Howard Hughes built the Spruce Goose. Before taking over the space in 2018, Google added multiple levels to the building, significantly expanding its square footage.

Developers in on it

Durnin said there are about a dozen developers converting industrial spaces to office buildings. Many of the properties are smaller and older, difficult for trucks to access, and are in need of major rehab work.

“If you own a building that has a previously obsolete use, the creative movement is still in effect,” Durnin said. “That space will lease up faster than a traditional office tower would because that space is unique.”

BKM Capital Partners acquired Backlot Burbank for nearly $85 million in 2018. The group added creative industrial upgrades, which Brett Turner, director of acquisitions for BKM, thinks will help attract talent. Turner said that while the property is still predominantly an industrial operation, several of his tenants use a portion of the space for offices.

Since adding the creative upgrades, Turner said, the Backlot Burbank property has shifted from drawing in “lower range tenants” to “new tenants that are highly skilled.”

That means higher rents than traditional industrial tenants would pay. Even though warehouse space is traditionally cheaper than its office counterpart, experts say historically low vacancy rates driven by ecommerce have tightened the price gap.

“We can increase our rent substantially, and the tenants are happy to pay it to attract the talent,” Turner said.