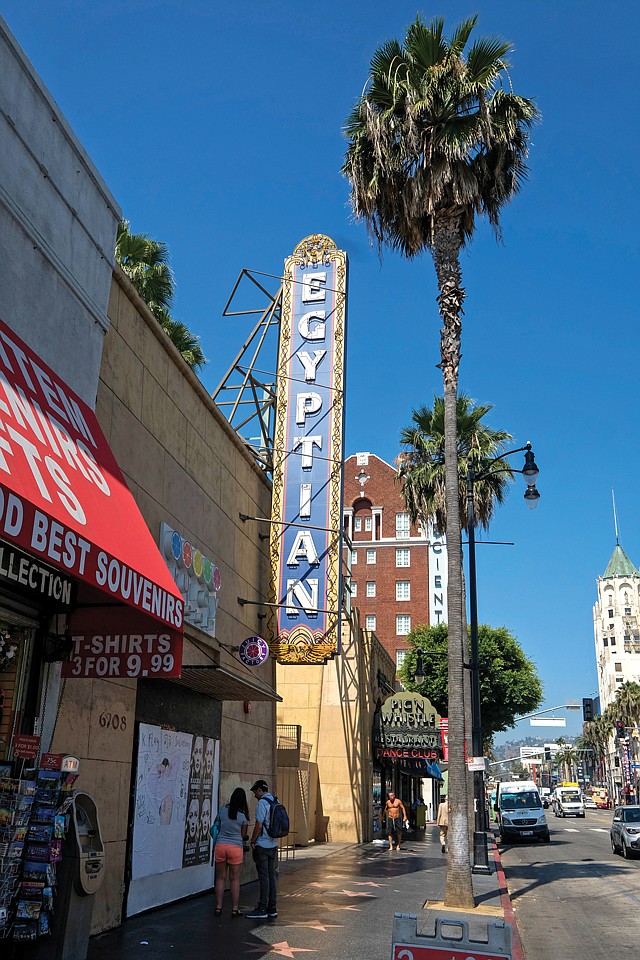 Hollywood Icon: The Egyptian was home to the first L.A. movie premiere. Photo by Ringo Chiu.

Streaming titan Netflix Inc. wants to open its first big screen cinema, and it’s got its sights set on Hollywood’s iconic Egyptian Theatre. But a deal to acquire the property could be held up under ambiguous decades-old agreements between the current owner and the City of L.A.

Local nonprofit organization American Cinematheque has owned and operated the Egyptian since 1996 when it bought the historic theater, abandoned and in disrepair, for $1 from the city. As a condition of the sale, the nonprofit was required to rehab and revive the theater, turning it into a working cinema that could offer several screenings a week.

Now American Cinematheque, which has been delinquent in filing required annual reports with the state in recent years and is under investigation by the state attorney general, is looking to sell the iconic movie house.

Rick Nicita, chairman of American Cinematheque’s board, confirmed earlier reporting that the nonprofit is negotiating with Netflix on a sale. A source close to Netflix said the discussions were taking place, adding that the deal could include a partnership between Netflix and the 38-year-old Hollywood nonprofit.

It’s unclear whether the city will allow the sale.

Regina Birdsell, president of Chinatown-based Center for Nonprofit Management, said California nonprofits may sell land to for-profit companies. But a nonprofit selling land worth millions of dollars to a company with a $160 billion market capitalization could raise red flags — particularly if the city placed conditions on several millions of dollars in grants it has given to American Cinematheque.

“American Cinematheque may have to untangle their relationship with the city before a sale can go through,” Birdsell said.

From Fairbanks to Netflix

Opened in 1922, the Egyptian is part of local cinematic lore.

It was home to the first Los Angeles movie premiere, “Robin Hood,” starring Douglas Fairbanks. It played host to numerous cinematic milestones, including a run of two consecutive years, in 1959 and 1960, by Charlton Heston’s “Ben-Hur.”

The theater closed in the 1980s and was taken over by the Community Redevelopment Agency of the City of Los Angeles.

The building was damaged by the 1994 Northridge earthquake, by which time city officials were planning to revive the Egyptian as a Hollywood cultural center.

In 1996, the City Council passed an ordinance stipulating that the city would sell the Egyptian for $1 to American Cinematheque, a nonprofit formed in 1981 and focused on film festivals and screenings. The city also gave the nonprofit $5 million toward the rebuild and resumption of programming at the Egyptian.

Subsequent years brought more public monies to help American Cinematheque in sprucing up the Egyptian, including a 1999 Federal Emergency Management Agency grant of $1.1 million, which the Egyptian qualified for due to Northridge earthquake damage.

In a May letter to American Cinematheque, Becerra’s office noted that the nonprofit faces delinquent status because, among other matters, it has not filed an internal audit with the state in either of the past two fiscal years. Delinquent status is associated with failure to file required paperwork with the state — the first step to the attorney general suspending or revoking a nonprofit’s license.

Nicita said American Cinematheque is in “active discussions with the California attorney general to resolve this matter.”

A sale in the offing?

City officials couldn’t say whether American Cinematheque faces any restrictions on selling the Egyptian to Netflix.

City Councilman Mitch O’Farrell, whose district is home to the theater, didn’t answer questions from the Business Journal. Instead, his office provided a written statement: “The Councilmember expects that if there is a change in ownership, due diligence is done to ensure that any legal obligations are met and that the theatre must remain accessible for the public’s enjoyment for years to come.”

The city attorney’s office also couldn’t say whether American Cinematheque is allowed to sell the Egyptian. “Our folks looked into this and don’t have any information on this issue,” Rob Wilcox, a spokesman for City Attorney Mike Feuer, wrote in an email.

Nicita declined to detail any obligations American Cinematheque may have to the city, writing in an email, “The prospective terms of the American Cinematheque’s proposed sale of the Egyptian Theatre to Netflix are in compliance with the requirements of its original purchase agreement.”

A June 26 newsletter circulated to American Cinematheque members mentioned an “impending sale” that would provide the nonprofit with its first endowment, “which will ensure the future of our programs on the big screen for years to come.” The newsletter didn’t name Netflix as the buyer.

For Netflix, the Egyptian represents an opportunity for its cloud-based content to reach live audiences.

The theater also serves a practical purpose: providing a screen for the company to exhibit the movies it develops in-house. Theatrical exhibition is required for movies to be eligible for Academy Award nominations. Most U.S. theaters won’t show Netflix movies because the company doesn’t honor theatrical windows in which movies get an exclusive theatrical run before moving to the streaming service.

Netflix will look to keep American Cinematheque in the fold, according to sources close to the sale, but the nonprofit’s specific role at a Netflix-owned Egyptian has not been clarified.

Hollywood residents and businesses are pushing back against the sale, saying a Netflix takeover of the Egyptian would drive away the theater’s offbeat screenings and festivals — a loss for the movie-loving community.

“The American Cinematheque is the only nonprofit repertory theater in Hollywood, and if the Egyptian is sold to a for-profit corporation, the community will suffer a real loss,” said Richard Schave, co-founder of Esotouric, a Hollywood tour company.

Schave and Esotouric co-founder Kim Cooper launched an online petition last month to prevent the sale; they are planning to send the petition to O’Farrell’s office.