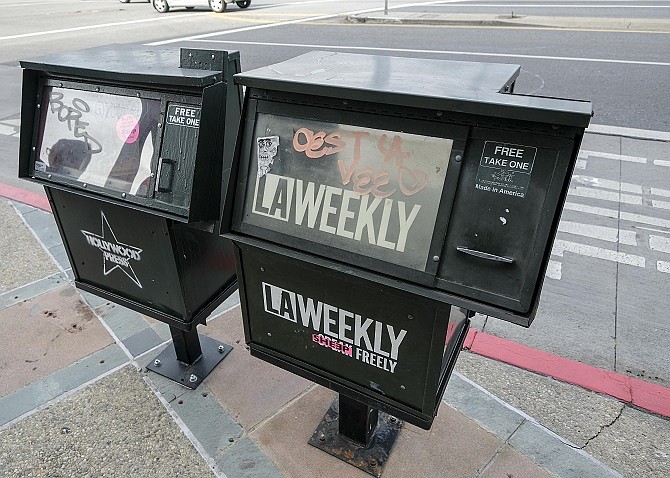 A dispute between the owners of LA Weekly has quietly settled, but the alternative paper’s future remains unclear as the publication has reduced its size and cut back on distribution.

David Welch, who sued Weekly publisher Brian Calle and the publication’s other owners for breach of contract and breach of fiduciary duty, said the sides reached a confidential settlement in late June.

Welch declined to say whether he remains part-owner of the publication following the settlement. “I am satisfied with the result,” he said.

The lawsuit, filed in August in Los Angeles County Superior Court, initially appeared to be a referendum on the 40-year-old alternative weekly.

Welch, a Los Angeles lawyer who specializes in the marijuana business, was part of an ownership group incorporated as Street Media that bought the Weekly in November 2017 from Voice Media Group. But he grew dissatisfied with the decisions of his mostly Orange County-based investment partners, including Calle, the former Southern California News Group opinions page editor.

The lawsuit argued that Calle diluted the Weekly brand by laying off most of the editorial staff — which sparked a boycott among some advertisers — and cancelling several events that were expected to bring in advertising revenue.

Welch also accused Calle of blurring the line between the Weekly’s editorial and business side by, for example, giving a favorable consumer review to Kurvana, a Santa Ana-based cannabis company where Calle works as chief marketing officer.

The private settlement was reached before a judge could rule on the case’s merits.

The Weekly continues to put out a print edition though it has averaged just 22 pages most weeks in 2019 compared to 39 pages the year earlier.

Court filings indicate Calle, who is also publisher of the 1-year-old Irvine Weekly, might look to move the LA Weekly to a web-only publication.

Meanwhile, the Weekly’s distribution has withered. The newspaper didn’t pay the annual City of Los Angeles fee required to distribute its product in the approximately 350 news racks that already display the Weekly’s logo, according to the Los Angeles Department of Public Works. A spokesman for DPW said the Weekly must take down its news racks or the city will impound them.

But there may be a buyer for the racks: Loud Media, a company Welch incorporated last year. DPW spokesman Paul Gomez said the city is reviewing a permit application from Loud Media seeking to buy the news racks from LA Weekly.

Welch described Loud Media as a new “augmented reality” company. He declined to say how the company would use the news racks.

An earlier version of this story failed to make clear that Loud Media would be purchasing the LA Weekly news racks from LA Weekly.