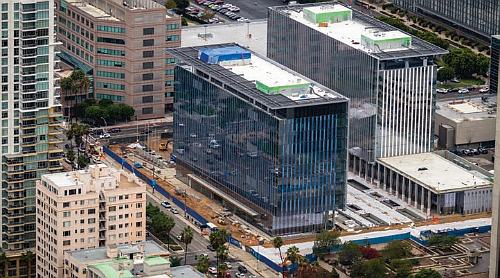 The Port of Long Beach is indeed embarking on what is shaping up to be a monumental year.

Moderate cargo growth is anticipated through 2019 as the nation’s second-busiest seaport achieves major milestones on projects that will bolster economic development, increase reliability of service and improve air quality for decades to come.

International trade touches the lives of everybody. It impacts what products we can buy, what they will cost, who will make them, and where they are made.

“With our many projects, we’re planting the seeds so this region thrives, and so Long Beach remains a great place to live and work,” said Mario Cordero, Executive Director of the Port of Long Beach. “We’re modernizing to keep the Port competitive, to attract cargo and generate jobs.”

Following record-breaking cargo volume at the Port in 2018, container growth in 2019 may continue. The growth is expected to be moderate given the ongoing uncertainty posed by the trade war between the United States and China. China accounts for nearly 70 percent of the imports coming into Long Beach and 40 percent of the exports.

“Count us among the optimists,” Cordero said. “With so much at stake on both sides of the Pacific, we believe the United States and China can resolve their differences and keep our respective economies growing.”

Long-term prospects remain bright for the Port, which supports more than 300,000 jobs in Southern California and about 1.4 million jobs nationally.

A return to the waterfront is anticipated this summer, when the Port moves into its new Civic Center headquarters in downtown Long Beach. Located next door to the new Long Beach City Hall and a new library, the Port Administration Building will be an extremely accessible, highly attractive showcase of government services.

“We’re proud to be part of the downtown renaissance,” Cordero said. “It’s exciting to see our offices bringing more jobs back to the downtown area.”

The downtown skyline is being further redefined by the replacement for the Gerald Desmond Bridge, which rises more than 200 feet over the Port’s Back Channel. Standing 515 feet tall, the bridge’s twin concrete towers are already the tallest points in Long Beach.

About 15 percent of America’s imports will be hauled by trucks crossing the cable-stayed span, known as the “bridge to everywhere.”

When it opens to traffic by the end of 2019, the new bridge will be higher to allow additional clearance for some of the world’s largest and most efficient cargo ships. The bridge will also be wider to ease the flow of cars and trucks.

Nearby, the Long Beach Container Terminal at Middle Harbor is entering the final phase of construction to create the greenest, most technologically advanced terminal in North America. The project adds on-dock rail capacity, shore power hook-ups and a longer wharf that will allow the new terminal to move twice the cargo with less than half the air pollution of the two terminals it replaces.

When completed in late 2020, the terminal will have a capacity of more than three million cargo containers, ranking it as America’s sixth-busiest port by itself.

The Port is further preparing for the future with plans to spend about $1 billion for rail projects over the next decade.

The centerpiece of that plan is the Pier B On-Dock Rail Support Facility, which will give the Port additional room to assemble longer trains to move goods more efficiently, limit truck traffic and reduce environmental impacts. Construction is scheduled to start in 2022, with the entire $870 million project completed by 2032.

Each train eliminates the need for up to 750 truck trips, which speeds the flow of goods across the country while reducing traffic on local roadways.

“The Port is a leader in environmental sustainability, infrastructure investments and community engagement,” Egoscue said. “We have a fiduciary responsibility to see that the Port’s funds are used properly and reinvested wisely in the best projects.”