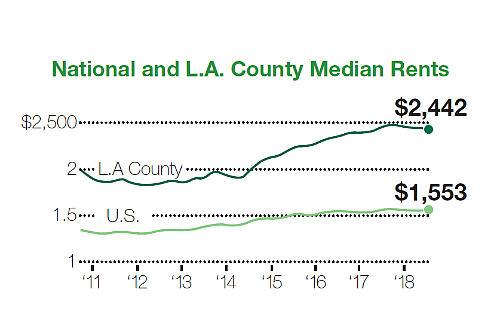 Over the last ten years, we have seen a consistent increase in multifamily development projects and apartment building construction. However, despite an increase in supply, the valuation of multifamily assets still continues to rise. While this is undoubtedly a positive, investors cannot help but wonder; is this all too good to be true? Can this long run of apartment building cap rate compression possibly continue or is its inevitable decline right around the corner?

And while the fear of a market correction may persuade investors to move on to another asset type, we believe that all this anxiety amounts to little more than empty chatter. Multifamily units are still a fantastic investment, vacancies will remain low, and rents will continue to increase for many years to come.

The numbers don’t lie. Apartment rents have increased consistently for the past nine years, and they show no signs of slowing down. For six out of the past eight years, we have seen a 3% increase in prices year over year, with the remaining two years coming in only slightly under that 3% mark. The cumulative effect of these increases has resulted in a 31% increase in rental prices from January 2011 to today. To put this in dollars and cents, an apartment that once rented for $1,495 as little as eight years ago, now rents for close to $2,000. That is a staggering, historic increase.

Many factors have led to this increased demand for multifamily assets. Population size continues to grow across the board, which inevitably leads to a shortage of housing options, namely apartment rental units. Though construction rates continue to rise, the demand has well surpassed the supply, leading to a severe imbalance and a shortage of units. It all boils down to Economics 101; the demand has outweighed the supply. The result? Higher rents and more return for investors.

Another consideration that has led to this market shift is an evolving lifestyle for a majority of Americans and various cultural trends. It’s quite posh right now to discuss the millennial generation and the impact they’ve had on the market, but this change has been affected by far more than just one generation. For those that lived through the Great Recession, the thought of owning a home and being solely responsible for a mortgage is utterly daunting. Therefore, the freedom that comes with renting becomes all the more attractive when viewed under the context of the housing crisis. Why stay stuck in a mortgage for 15, 20 or 30 years when renting affords you the mobility to change cities, careers, square footage and amenities? This fear of the housing market is very real, and the numbers back it up. In Los Angeles alone, home ownership has plummeted to a record low of 49%.

And finally, a rise in student loan debt has drastically increased the need for multifamily housing. Ranking as the second highest form of consumer debt in the nation, student loan debt has utterly crippled an entire class of future homeowners. As it currently stands, 44 million students, that class of potential homebuyers, collectively owe over $1.5 trillion in student loan debt. This burden precludes them from even considering home ownership in the foreseeable future, forcing them to rent and adding further to this increase in demand for multifamily units.

Add sitting on top of all of these factors is an entire class of retirees from the baby boomer generation who are now electing to downsize into more manageable rental units. Projections predict that the number of Americans over age 65 will double in the next 40 years, increasing from 46 million today to close to 100 million by 2060. Again, the numbers don’t lie. The demand is moving at an accelerated rate, and supply needs to kick into high gear to catch up.

This lack of supply is creating in effect a bottleneck for rental rates and pricing. By some estimates, California alone will need at least 180,000 new housing units per year to stabilize value and avoid future rent increases. And again, this supply bottleneck can be explained by a multitude of reasons.

One factor is that new construction projects require the approval of various governmental agencies. This process can be very lengthy and burdensome, not to mention extremely time consuming and risky for the developer. City and permit approval times vary wildly from city to city, with metropolises like San Francisco and Los Angeles taking as long as a year to approve developments. And that timeline assumes that the project does not require any zoning changes, a process which can add considerably to the devlopement’s timeline. Similarly, developers can find themselves slowed down by organizes of residents standing in opposition to new development projects (NIMBY), and even environment concerns (CEQA). These factors can lead to extreme delays, as long as two years for medium-sized projects. What’s more, these delays can tangibly affect the project itself, leading to changes in local ordinances that could limit the size of units, etc.

Further, developers are currently making decisions wholly based off of fear. Timing the market accurately has always been a problem for developers, but it became all the more difficult following the 2008 crash. Developers became skittish, and it took several years before they allowed themselves to re-enter the game or even consider gathering enough capital to start new projects.

And finally, one of the most recent obstacles to new developments is a rising cost for construction and materials. Last year alone, Los Angeles experienced the highest increase in construction cost of any city in the nation. Land costs, material costs, and labor costs are all increasing at record-breaking levels. Skilled journeymen are becoming harder and harder to find, and contractors are stealing labor from their competitors to keep up. To woo these new workers, contractors offer more pay which results in a never-ending cycle of worker theft, cascading into an enormous increase in labor rates across the board. On top of all these problems, the majority of skilled workers left the industry after the Great Recession of 2008, and there is now far less appeal for new workers to join the labor force.

Together, all of these factors work in concert to lead to an immense shortage of supply.

And again, we must return to our economics 101 and consider simple supply and demand variables. After examining these factors, a sophisticated and savvy investor can only conclude that a rise in demand and moderate supply increases will ultimately lead to a healthy ecosystem for their assets. Multifamily will continue to remain strong into the foreseeable future.