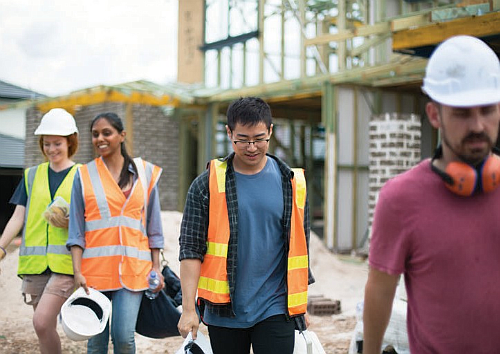 At 3.7 percent, U.S. unemployment is at its lowest level in 30 years. Jobless claims are near a 50-year low, and the number of employed adults is at an all-time high. This should be good news, and for many households it is. But for the middle market, these historic numbers are creating significant growth challenges affecting everything from holiday hiring on the retail side, to commercial and residential housing construction, transportation, manufacturing and professional services—you get the picture.

Meanwhile, wage gains have been tepid, to say the least, with workers at the lower end of the income scale only recently beginning to see increases in their paychecks. The lack of a more significant pickup in wages, as unemployment heads toward our forecast of 3.5 percent, and possibly lower, is one of the major dilemmas facing policymakers and economists.

So what’s behind this historically tight labor market? Why have wage gains been so stubbornly tepid? And will these hiring and wage challenges end soon? To get a sense of why we believe the tight labor market will persist for much longer than many expect, it helps to put how we arrived at this critical juncture in some perspective; the seeds for today’s tight labor market were planted many, many years ago.

Since the advent of the consumer-driven economy at the end of World War II, the manufacturing sector has gone from employing 32 percent of the labor force in 1947 to less than nine percent of nonfarm workers in 2017. This shift occurred as consumer tastes changed and employment in local manufacturing was replaced by regional, and then global, supply chains.

During the same period, the service sector has more than doubled its share of the labor force from 19 percent of 1947 nonfarm payrolls to 45 percent today. Government employment has averaged about 16 percent of the workforce, drifting slightly lower since 1975. The finance and construction sectors have also been relatively stable, each averaging about five percent of nonfarm payrolls.

The current U.S. political landscape is a reminder that for many American workers, the major story of the post-World War II era has not necessarily been the cultural shifts that society has undergone, but rather how sound investment decisions have resulted in a long-term hollowing out of the U.S. industrial base. So to the extent that employment opportunities are the basis for social discontent, we would have to look at the narrowing of employment opportunities in the manufacturing sector as a principal factor

The share of employment in manufacturing declined on trend from 1947 until 2008, as increased consumer demand for high-end, cheaply produced foreign goods overwhelmed the demand for higher-cost and sometimes outdated, locally manufactured ones. Not only did production shift to offshore locations, but automation replaced domestic labor due to new technologies. Ironically, a decline in the percentage of workers engaged in manufacturing durable and nondurable goods has moderated over the last decade and, in recent years, there appears to be a flattening out. Stabilization could very well be the result of demand for foreign-branded goods produced in domestic production facilities (e.g.,German and Japanese autos manufactured in southern states) as well as renewed consumer preference for local products illustrated by farm-to-table and artisanal trends. All of this seems to have helped stop the bleeding, at least at the margins.

Ideally, rather than trying to stuff the toothpaste back in the tube, domestic manufacturers could further transition from producing base materials to higher-end goods, using the economies of Japan and Germany as a model for continued growth and the health.

Wages, supply and demand for labor

From a macroeconomic perspective, access to a broader array of lower-cost goods has helped boost overall standards of living and the U.S. economy as a whole. On a human level, however, it has left many workers (formerly employed in the industry), and the regions and towns overly dependent on it, with reduced job prospects and more challenging local economies. By the 1980s, instead of guaranteed pension plans and lifetime health care, workers were left to fend for themselves as the industry began to flee union-friendly regions for right-to-work states, in pursuit of cheaper labor.

Employers also began to outsource tasks not considered direct inputs to production (e.g., cafeteria services, janitorial tasks) that could be easily replicated by lower-cost service providers. Even direct inputs began to be outsourced to lower-cost providers, which not only limited demand for local labor, but also likely contributed to the reduction in research and development and the decline in production efficiencies that would eventually allow foreign manufacturers to overtake domestic production.

As illustrated below, the period from 1981 to 1985 saw a sharp drop in hourly wages as the increased supply of low-cost labor led to “take it-or-leave-it employment opportunities” and then to low-wage growth thereafter. The global labor market had indeed taken hold in the new political environment.

Note that in recent years, hourly wage growth is once again moving higher, but remains at historically low rates of less than three percent per year. This implies that household income gains will just barely be enough to cover rising prices if inflation were to remain at the Fed’s current two percent inflation target. Furthermore, the discontent that has dominated the post-crisis recovery era seems likely to linger unless industry and policymakers come up with a solution.

While all other industries have employed fewer workers over the past 17 to 18 years, it is ironic that the industries that have increased their share of manufacturing employment are those that use steel or aluminum, including transportation equipment, fabricated metal and machinery. The imposition of tariffs on the main inputs to production in those industries would threaten their ability to continue providing employment, further damaging the manufacturing sector of the economy.

Joe Brusuelas, RSM Chief Economist, has over 20 years of experience in finance and economics and specializes in analyzing the U.S. monetary policy, labor markets, fiscal policy, economic indicators and the condition of the U.S. consumer. He provides macroeconomic perspective to help clients anticipate and address the unique issues and challenges facing their businesses and the industries in which they operate. He also produces monthly economic reports for the middle market and for key industries within that market.