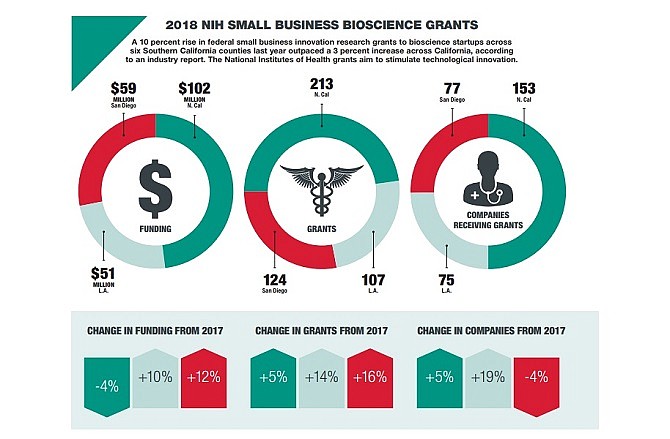 Bioscience startups across greater Los Angeles outpaced California as a whole last year in the amount of federal small business research grants received, according to an industry report.

The National Institutes of Health awarded 102 small-business innovation research grants to 75 companies across the Southland in 2018, a 10 percent increase from the prior year, according to a preliminary study by the Southern California Biomedical Council.

The boost in funding for small biotech, medical device, diagnostic and digital health firms was more than three times greater than a statewide increase of 3 percent.

“The trend is that L.A. companies are applying for more funds,” said Ahmed Enany, chief executive of SoCalBio, a downtown-based trade group, and author of the report. “Greater L.A. leads the way. We’re hoping that the grants will continue.”

The NIH small-business bioscience grants are coordinated by the Small Business Administration.

California received $212 million for 444 awards to 305 companies in 2018, a 3.4 percent increase from the prior year. Massachusetts was second on the list with $117 million in grants.

Northern California and Bay Area bioscience led the state with $102 million in awards – nearly half the funds allocated to the state – but that was actually a 4 percent drop in the amount of funding received in the region in 2017.

San Diego, another major bioscience hub, took in $59 million, which represented a 12 percent boost in funding for the region.

Six counties that make up greater Los Angeles collected $51 million, which was divvied up into 107 grants to 75 companies – up from 63 awardees the prior year, a 19 percent jump.

These companies join giant biotechnology company Amgen Inc., based in Thousand Oaks, which got its start decades ago with the help of an SBIR grant, Enany said. The federal grants help validate new companies for potential investors.

“If you’re a university spinoff, and you haven’t raised any money, and you have patents, it’s easier to get started with such grants,” he said. “It helps you get your house in order before you get outside money.” 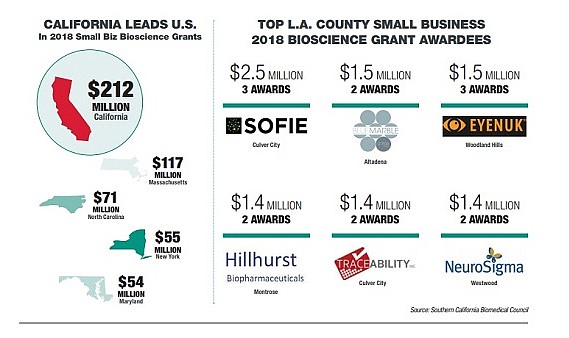