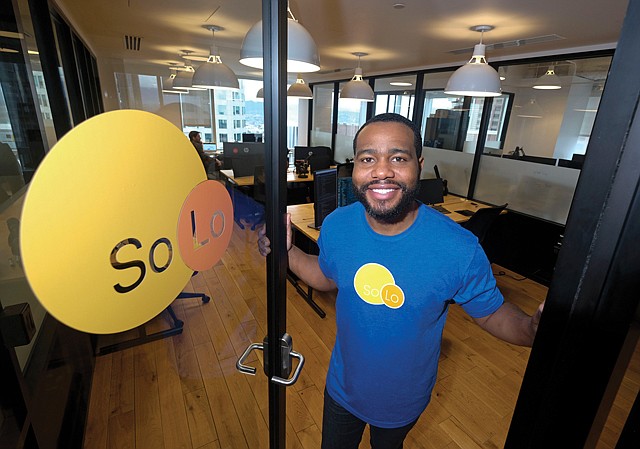 SoLo Funds Inc., a mobile exchange that lines up sums of money under $1,000 for American borrowers short on cash, has moved the company’s headquarters to downtown, and is attracting big backers as it gets ready to raise $15 million in a second investment round.

The company, formerly based in Cincinnati, moved into a WeWork Cos. Inc. workspace for technology startups, a temporary office solution as it searches for a permanent spot, perhaps in Culver City, according to SoLo co-founder Travis Holoway. He said the move was predicated on attracting talent to the company.

Holoway’s partner in the startup, Rodney Williams, said SoLo raised $3 million in seed funding over the past year. A Series A round is planned for June with a $15 million target, the founders said in interviews.

SoLo’s biggest investor so far is Liberian-American beauty mogul Richelieu Dennis, who sold his Sundial Brands beauty products company to Unilever in 2017. He’s funded roughly half of the total seed money to date, according to the founders.

Holoway and Williams’ target market is Americans living paycheck-to-paycheck, and they see their peer-to-peer lending platform as an alternative to U.S. payday lenders, which charge high interest rates. The pair said the idea came to them after seeing family and friends ask to borrow money despite having high-paying jobs.

Peer-to-peer lending, also known as P2P lending, is the practice of lending money to individuals or businesses through online services that match lenders with borrowers.

SoLo borrowers are not charged interest but instead participate in an auction-style process to get up to $1,000 deposited into their checking account by a lender on the company’s platform. Anyone can borrow or lend via the SoLo app. The borrower agrees to terms with the lender to repay in no more than 30 days the loan principal plus a so-called tip, a premium on top of the loan amount. SoLo also can get a cut of the payback in loaned money if the borrower OKs an additional payment – called a donation – to the company. The tips and donations are voluntary. Tips made by borrowers to the lenders average about 8 percent of the loans, with roughly 3 percent of the loan amounts donated to the company, Holoway said. He declined to say what percentage of borrowers received loans without offering a tip or a donation.

SoLo is one of several fintech startups in the peer-to-peer loan space. Other platforms include Santa Monica-based Tala; Irvine-based microinvestor Acorns Grow Inc.; billionaire Mark Cuban-backed Dave Inc., located in the Miracle Mile; San Francisco-based nonprofit lender Kiva Microfunds; and Hollywood-based ZestFinance Inc. These companies operate in a gray zone in the banking world without having to provide much in terms of registration with or licensing by state and federal regulators because they do not technically charge interest or fees for their services.

“It’s not clear whether their particular business model requires one. We do take unlicensed lending very seriously,” said Mark Leyes, a spokesman with the California Department of Business Oversight. “Some of these novel lending products do require further investigation.”

Despite some regulator misgivings, peer-to-peer lending platforms have garnered support from some in the finance world.

“They are very popular,” said Bhagwan Chowdhry, a Bhagwan Chowdhry Anderson School of Management finance professor who teaches on microfinance. “Socially conscious people think this is a good idea to help people in need. Here, these guys are saying that they collect a donation, which they can. I don’t see any particular problem with that.”

Rodney Ramcharan, an associate professor of finance and business economics at USC’s Marshall School of Business, notes that P2P lenders like SoLo are targeting the payday lenders who charge “very, very high interest rates at up to 20 percent.”

With the credit scoring technology built into these platforms, P2P lenders like SoLo could potentially undercut the multibillion-dollar payday loans industry, Ramcharan said.

“It’s operating under the donation principle, so they don’t need a bank charter,” he said. “These guys offer a much shorter term, and it takes away the liquidity risk.”

SoLo also announced the appointment of its new chief product officer, Jon Blackwell, who is a co-founder Tala. Tala, which has raised more than $105 million to date, makes similar microloans but focuses on underserved consumers in Africa, India and developing countries.

Blackwell remains on Tala’s board and continues to provide some consulting but joined SoLo as a challenge to “take a concept and ideas” to design the mobile phone “peer-to-peer” lender from scratch – like he did at Tala.

“I love the social aspect of it,” the 30-year-old Blackwell said.

Holoway formerly worked for Milwaukee-based financial services giant Northwestern Mutual in New York, while Williams worked as a brand manager with Procter & Gamble Co. in Cincinnati, which is where the two businessmen initially met.