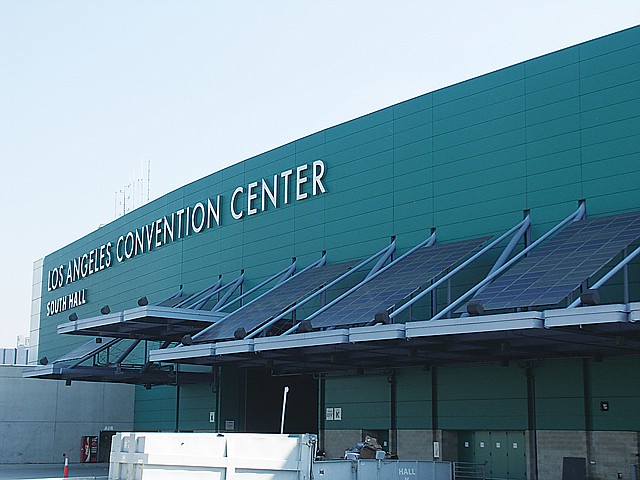 AEG will also add a second tower with 850 rooms and additional ballroom space to the AEG-owned JW Marriot Hotel, as part of the city’s goal to add more hotel rooms within walking distance of the convention center.

To help pay for the hotel expansion, the city will give AEG a cut over the next decade of the occupancy taxes it collects from the hotel’s guests. The city payout could net AEG as much as $167 million, according to a city council report.

AEG has indicated it is seeking project funding from Plenary Group, a company headquartered in Australia that focuses on public-private partnership investments.

The company has estimated that the hotel revamp will cost $710 million, and it will cost $500 million to revamp the convention center, with construction expected to begin by the end of 2019.

The city has touted AEG’s plans as a way of improving a convention center seen as second-tier to competing centers in Chicago, Las Vegas and elsewhere.

The plan has the collateral effect of furthering AEG’s grip on a downtown swath that already includes the AEG-owned L.A. Live and Staples Center.

AEG is a distant No. 2, by revenue, in live entertainment nationally to Beverly Hills-headquartered Live Nation Entertainment Inc. But in Los Angeles, the gap between the two companies in venues owned and major events booked is much smaller.

Speaking of Live Nation, the company announced last month a partnership with Westwood-headquartered Oak View Group to finance a $338 million basketball arena in the heart of the University of Texas at Austin campus.

Live Nation and its Austin-based concert promotion subsidiary C3 Presents formed a new joint venture, ArenaCo, to build the facility, which will be used for the university’s women’s and men’s basketball teams, plus for concerts and other live events.

The project will receive no public funding and will be completed by 2021, according to an ArenaCo press release.

The partnership is a natural fit. OVG was founded by Tim Leiweke, the former president of Live Nation-rival AEG, after he was pushed out at AEG in 2013.

The 1982 film “Young Doctors in Love,” a spoof of long-running soap opera “General Hospital,” faded quickly, but a legal battle over the film rages on.

The scribe claimed he and a class of fellow writers, actors, directors and producers were shortchanged on their cut of royalties from Disney’s home video catalogue.

One day after Elias sued Disney, Martin Elfland, the producer behind the 1983 Richard Gere vehicle “An Officer and a Gentleman,” filed an almost identical lawsuit against Warner Bros. Entertainment Inc. regarding home video royalties.

The Universal case was the first to settle, with plaintiffs and their lawyers collecting $26 million.

The premise behind each of these lawsuits harkens back to the early days of home entertainment. When U.S. consumers first started buying VCR’s in the early 1980s, the studios used outside companies to turn their movies into video cassettes. The outside companies almost universally took home 80 percent of the home video profits, leaving the studios with 20 percent.

The studios then changed course and began making video cassettes in-house. But according to the complaint, the studios maintained the royalty calculation off 20 percent of the profits figure. The artists in these lawsuits claim that is a breach of the contract they signed regarding royalties.

Douglas Johnson and Neville Johnson, based in Beverly Hills, are the lawyers behind these royalty cases.

Warner Bros. declined to comment, and messages left with Disney were not returned.