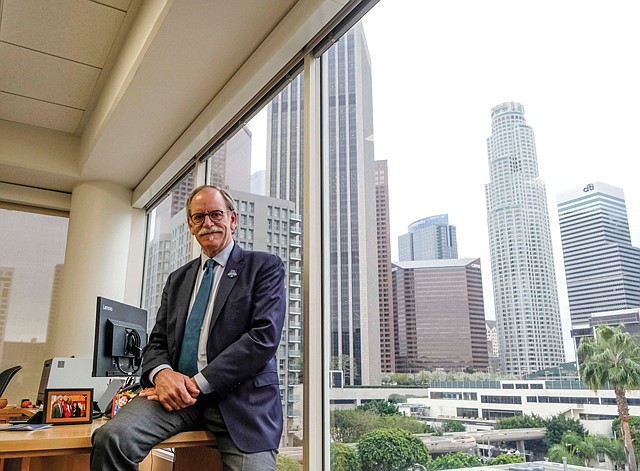 Office Transplant: Mone at OneLegacy’s downtown headquarters. The organ donation nonprofit will move to Azusa in the near future. Photo by Ringo Chiu.

On a recent Tuesday, OneLegacy Chief Executive Tom Mone turned toward a large wall monitor at his downtown office to study a real-time roster of brain-dead patients at hundreds of hospitals across the region.

For the longtime head of the nation’s largest organ procurement organization, each body presented the potential for a new lease on life – and to break new donation records.

“From our standpoint, it’s an opportunity to help more families, more loved ones and more recipients,” Mone said. “At the end of the day, tragically, death happens. But an organ donation is an opportunity to make something good.”

OneLegacy, the only federally designated organization authorized to collect organs across seven counties in greater Los Angeles, had a banner year in 2018.

It saw a record number of organ donors from hundreds of hospitals, funeral homes and coroner’s offices across the region, with the number of donors growing 6.4 percent to 4,500 last year.

That translated to an overall jump in organ, tissue and cornea donations, which grew 10 percent to 152,560. The nearly 11 percent rise in donated organs – a category that includes kidneys, livers, hearts and other vital body parts – led the increase.

The rise in donations resulted in a record number of transplants performed at 11 transplant centers across Southern California, from Cedars-Sinai Medical Center to Riverside Community Hospital, according to the agency. Organs were also sent for transplants in other states.

The pacesetter year also meant OneLegacy set a revenue record, pulling in $105 million in 2018, Mone said, a 10 percent rise from the prior year.

It opened a $17 million, 40,000-square-foot transplant center in Redlands early last year to recover organs for hospitals throughout the Inland Empire.

This year, OneLegacy plans to move from its downtown headquarters to Azusa where it will also open a transplant recovery center with eight operating rooms and a medical transit helipad to serve a vast region from Santa Barbara to San Clemente.

The proposed 150,000-square-foot facility is estimated to cost between $50 million and $60 million. A site has been identified but has not yet been purchased or leased, and negotiations are underway, Mone said.

“We think we’re on track for another record year in 2019,” Mone said. “We continue to build, with our very good relationships with hospitals, medical examiners and communities, to enable more people to save and heal lives through donations.

“We fully believe that the methods we have used to become successful here can now be employed around the world.”

For an organ procurement agency that now claims to be the nation’s largest as measured by the number of residents served – some 20.5 million – and the number of organ transplants performed, OneLegacy’s recent success hasn’t always been the norm.

The nonprofit was founded in 1977 as the Southern California Organ Procurement and Preservation Center, and nearly went belly-up two decades ago for failing to meet federal standards for the number of organ collections.

Another local organ collection agency, the Regional Organ Procurement Agency at UCLA, was fairing even worse.

Mone, then the chief executive at San Gabriel Valley Medical Center, was hired in 1999 to right the ship.

He merged both agencies and changed the name to OneLegacy to impart the value of an organ donation to donors, families and recipients.

He also helped set national standards with the nation’s first electronic donor record and a web-based Organ Offer System to replace phones and faxes, which later became the U.S. standard.

OneLegacy was also the first procurement agency to perform risk-reducing nucleic acid testing on all donors, which also became a U.S. benchmark.

But the key to turning around a struggling agency – and doubling the number of annual organ collections it was performing in 2000 – was people, Mone said. The agency now has 340 employees, of which more than 200 are deployed to 215 hospitals to reach out to doctors and donor families.

Donations have shot up from fewer than 45 percent of eligible donors to 77 percent, largely because of family outreach.

“The most important thing was to hire more staff to be present at hospitals in supporting families when donations happen,” Mone said. “The other thing was developing a system to manage donations across a large geographic area and hundreds of facilities.”

OneLegacy now consults with other organ donation agencies in nearby areas, such as San Diego, to streamline operations. It also runs the state’s Donate Life California Donor Registry, which has registered 16 million potential donors through the Department of Motor Vehicles.

Mone attributes the agency’s recent growth to earlier organ referrals by hospitals and medical examiners, more staff pursuing such referrals through community outreach, and a bigger pool in registered donors via the DMV.

“I think they’re a terrific organization, and they offer members an amazing service” said Jennifer Bayer, vice president of external affairs for the Hospital Association of Southern California. “I think Tom Mone is great. He has a top reputation. He’s very highly thought of in the industry.”

OneLegacy, one of 58 federally designated organ procurement organizations in the United States, is tasked with the collection, management and distribution of organs, tissues and eyes, for which it operates the largest nonprofit eye bank in the state.

To accomplish this, it must pay for the management of each donor case – including their surgical removal, testing and allocation to transplant centers, which is determined by a national transplant waiting list.

By law, OneLegacy and other organ collection agencies must be fully reimbursed to cover organ recovery costs, plus a small percentage to cover operations.

“How do we get paid? I send invoices to all our transplant centers, and they pay us,” he said. “So last year, Cedars-Sinai paid us an average fee of $48,500.”

The region’s biggest transplant engine is UCLA Ronald Reagan Medical Center, which led the nation in organ transplants in 2017 with 641 surgeries at its Westwood campus.

Keck Medicine of USC was also another strong OneLegacy client.

“OneLegacy partners with local transplant centers to increase awareness about organ donation in the community,” Amy Hackmann, surgical director of lung transplantation at Keck Medicine of USC and an assistant professor of surgery at the medical school, said in an email. “They involve transplant physicians and surgeons like myself to improve the process of organ donation and ensure as many patients are helped as possible.

“They also support donor families through the donation event and the grieving process, making an extremely difficult time for the family a little easier.”