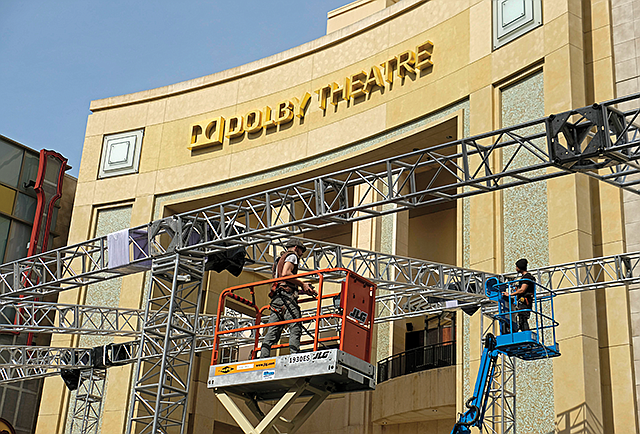 Show Time: Workers set up scaffolding for the 91st Academy Awards show at the Dolby Theatre in Hollywood. Photo by Ringo Chiu.

The worst night of the year for a Los Angeles movie theater owner?

It might be the evening of the Academy Awards, said Greg Laemmle, owner of the Sawtelle-headquartered Laemmle Theatres chain.

“It’s almost shockingly dead,” Laemmle said of his nine Los Angeles County movie theaters, which can see revenue declines of up to 70 percent compared to a typical Sunday night.

In Los Angeles, though, the Academy Awards remain a fixture, to the point other entertainment options on Oscar night are sparsely attended, and many venues do not book events at all.

A look at Los Angeles County’s top 20 venues by capacity found that just two – the Regent Theater and Orpheum Theatre, both in downtown – had rival shows booked for Oscar night. The Regent is featuring two comedians, and the Orpheum has Christian rock artist Lauren Daigle performing.

One more venue, the Hollywood Pantages Theatre, has a special 1 p.m. showing of “Kinky Boots,” a musical featuring songs written by Cyndi Lauper.

Another, the Hollywood Palladium, offers an Oscar viewing party at $1,000 per ticket.

Some of the biggest venues, such as the Greek Theater and the Hollywood Bowl, are not holding events throughout February, though that is attributable to a seasonal schedule.

But for others sites including the Staples Center, The Forum, Ace Hotel Theater, Fonda Theater and Wiltern Center, the lack of events is somewhat aberrant for a Sunday night.

“You would think that these venues would be doing counterprogramming,” said Gigi Johnson, a music business professor at UCLA. “But I suppose it is a long-standing tradition, and they don’t want to tempt fate.”

The lack of shows and events on Oscar night is chalked up as a day lost for the venues, and, to an extent, the Los Angeles operations of Live Nation Entertainment Inc. and Anschutz Entertainment Group Inc., which book most of the town’s events.

Venue operators referred questions to these companies; Live Nation could not be reached for comment, and AEG declined to speak.

The Academy Awards’ dominance in Los Angeles has a complicated overall effect on what economic benefits the awards show, and its attendant celebrations and street closures, confer upon Los Angeles County.

The Oscars, which are on Feb. 24 this year, may benefit hotels, and tuxedo and evening gown companies, as multiple economic studies have noted.

The most optimistic Oscar economic impact study is from the Los Angeles Economic Development Corp., which in 2008 found the event generated $130 million in economic activity. The nonprofit has not published a subsequent Oscar night report.

The most recent Oscar night study was by downtown-based Micronomics Inc., which in 2014 found $67 million in Academy Award-related benefits.

The Micronomics study claimed local economic benefits such as $26 million spent on show logistics, $2 million associated with the wardrobes of female award ceremony attendees, $2 million for limousine rentals, and $1.5 million in hospitality and other spending by out-of-town visitors.

The study also said that if one-quarter of the estimated Oscar viewers visited Los Angeles after seeing the event, an additional $149 million in local revenue would be generated.

Some members of the Hollywood business community echoed these study’s findings.

Marty Shelton, vice president of NAI Capital Realty, which manages retail leasing at 6922 N. Hollywood Blvd. and buildings near the Dolby Theatre, site of the Academy Awards, said business owners complain to him about street closures, which start three weeks before the Oscars.

But Shelton believed the Oscars are a net positive for the businesses he works with.

“The big picture is that tourists come to Hollywood, and they want to walk the area that they saw the celebrities walk in,” Shelton said.

Others question whether there’s an overall benefit to the region, however.

Beacon has not done a net impact study of the Academy Awards or other blockbuster Los Angeles events, Thornburg said, “Because, candidly, they are really hard to do.”

Thornburg hypothesized the shutdown of many venues might cancel out whatever extra money the Oscars generates.

“The Oscars are an enormous deal for the movie industry,” Thornburg said. “But overall, it’s not that big of a deal for Los Angeles.”