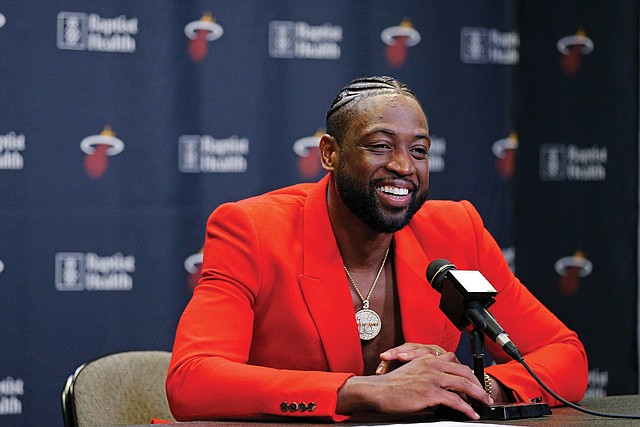 When basketball star Dwyane Wade wanted to expand his career beyond the court, he turned to Henry Thomas, Tom Young and other agents at Creative Artists Agency.

Wade’s team started by negotiating a book deal with HarperCollins Publishers for “A Father First,” Wade’s 2012 memoir about single parenting.

They also connected Wade with Ron Howard to executive produce the forthcoming documentary, “Last Dance,” about Wade’s final season in the NBA.

“Our practice has grown as the profile of the NBA player has grown,” said CAA sports agent Steven Heumann.

Century City-headquartered CAA is one of the big four talent agencies in the United States representing actors, entertainers and directors. It has also emerged as the dominant sports agency in the country, in part because it provides services beyond negotiating athletes’ salaries — including entertainment opportunities and post-retirement work.

“CAA has been able to take athletes from the beginning of their career and take them into their post-athletic career,” said Timothy Davis, a sports law professor at Wake Forest University and co-author of the 2016 book, “The Business of Sports Agents.”

Competition is heating up, however, Davis said. Other major talent agencies are expanding their own sports representation, and virtually all sports agency practices now follow the full-service model CAA helped popularize.

One firm that might have the resources to rival CAA in the future is United Talent Agency, another big four talent agency that began a sports division in July. Heading its sports division is Rich Paul, who created Klutch Sports Group in 2012 after he plucked basketball megastar LeBron James away from CAA.

“Paul will be able to provide his clients the full array of services under the clutch umbrella,” Davis said.

ISE has since grown to more than $1 billion worth of contracts under management with a focus on Major League Baseball players and on developing services beyond contract negotiations.

ISE differs from CAA in that it relies on partners such as London-based Independent Talent Group Ltd. to provide entertainment opportunities instead of providing those services in-house. It relies on a similar business model, however, which Wake Forest’s Davis characterized as “brand development financial services.”

Firms like ISE could cut into CAA’s market share, Davis said, though none currently have the resources to challenge CAA’s industry supremacy.

How CAA got here

CAA declined to provide information on revenue and earnings for the company or its sports division, but sources close to CAA say the sports division is its biggest by revenue and that CAA is the biggest sports agency in the country with nearly $10 billion in athletes’ contracts under management.

CAA’s rise was partly due to good timing, Davis said. The agency created its sports division in 2006 as the country’s major sports agencies — SFX Sports Group and Assante Sports Management — were hit by intracompany disputes between high-profile agents. SFX soon went out of business, and Assante reconfigured as a Toronto-based financial advisory firm.

But CAA also got athletes to sign based on the company’s motion picture and television divisions.

CAA represents a generation of basketball stars, including Wade, Carmelo Anthony, Chris Paul and Paul George, each of whom started their own production company or have a production credit to their name.

Some agents, like Young, have specialties such as finding broadcast opportunities for retiring athletes. Other agents, including Heumann, primarily negotiate contracts for basketball players but also facilitate athletes’ philanthropic efforts and social media presence.

“There was clearly some value in having an agency that represents both entertainment and sports figures as certainly quite a few athletes aspire to be in movies,” said Victor Matheson, a sports economist at College of the Holy Cross.

CORRECTION: An earlier version of this story misstated the circumstances surrounding the creation of Independent Sports & Entertainment. The agency was incorporated in 2016 following the dissolution of Relativity Sports, which was partly owned by Relativity Media.