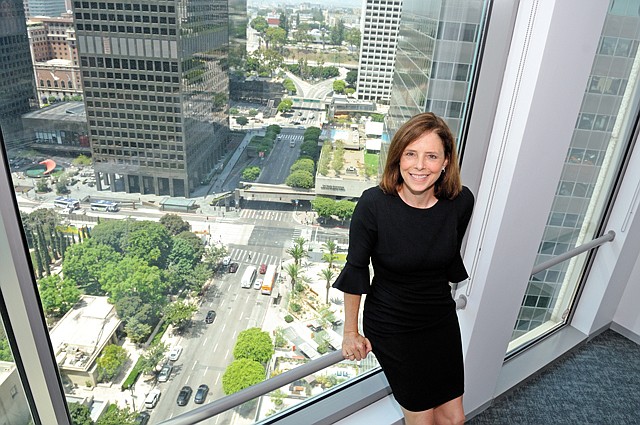 When it comes to landing major sports events for Los Angeles, the 18th floor of downtown’s U.S. Bank building could be considered the control tower.

That’s where Kathryn Schloessman, president and chief executive of the Los Angeles Sports & Entertainment Commission since 1997, orchestrates the city’s process of bidding for, securing and planning some of the world’s biggest events.

The nonprofit LASEC, which was launched in 1995 by then-Mayor Richard Riordan and works closely with the Los Angeles Tourism and Convention Board, has played a key role in shaping what Schloessman calls L.A.’s “decade of opportunity.”

Among the upcoming events Schloessman has helped bring to Los Angeles are Major League Baseball’s 2020 All-Star Game at Dodger Stadium, the National Football League’s Super Bowl in 2022 and the College Football Playoff National

Championship Game in 2023 — both at the new Los Angeles Stadium at Hollywood Park — and golf’s U.S. Open championship in 2023 at the Los Angeles Country Club.

The city is also a key part of the U.S. bid to host the 2026 World Cup soccer tournament and Schloessman wants the city to hold a future NCAA Final Four championship. And, of course, in 2028 Los Angeles will play host for a third time to the Summer Olympic Games.

The Business Journal sat down with Schloessman for a closer look at the LASEC’s strategy and how the organization’s efforts drive returns for teams and the local economy.

How do you explain LASEC’s role on the city’s sports landscape?

We are the official bidding organization for this city for major sporting and entertainment events, but we are also part of the team that brings everyone together and makes sure it all works well once we are awarded the event. It’s not just about making a bid, turning it over and leaving.

How does the organization ensure events are successful once you’ve secured the bid?

We have a lot of great resources in this city, but if you don’t know your way around — not just L.A., but Inglewood, Pasadena and other cities — you will get frustrated. These events need a single point of contact. We make sure they are connected and in communication with the right people. We don’t actually run the event, but we stay involved throughout the process and make sure the event organizers get whatever help they need — whether it’s closing down streets, being introduced to sponsors and promotional partners, contracting hotels and venues, or recruiting volunteers.

How has your background in the business world helped with this role?

I came out of commercial real estate at CBRE, representing various law firms. I had no background in the sports business. My background has helped me with a lot of business community relationships in Los Angeles. I can go to them and ask for help in different ways, shapes or forms. It’s all about relationships.

What advantages does L.A. have when it comes to attracting Olympics and Super Bowls and All-Star Games?

We are selling a “new” L.A., and as a salesperson, this city is not too tough of a sell. I feel this is L.A.’s moment. We are a well-oiled machine when it comes to hosting major events, and we are able to pull from a great resource base to get that done.

How does L.A. benefit from its extensive range of stadiums and arenas?

There has been tremendous investment made in the venues in this city, and we want to make sure these events know all of the options they have. We work closely with AEG (at Staples Center downtown and Dignity Health Sports Park in Carson), LAFC (Los Angeles Football Club) and the new Banc of California Stadium. The L.A. Stadium and Entertainment District in Inglewood is phenomenal. Then there is the Coliseum and Dodger Stadium spending significantly on improvements to their venues. Staples Center is still the best arena in the country 20 years after it opened, and it is investing in its future as well. It’s nice to have so many assets to showcase compared to other cities.

The Clippers recently rolled out plans for a new arena in Inglewood that would open in 2024. What possibilities does that add?

We’ll have to wait and see, but you always benefit from increased investments that create new infrastructure. It’s great to have another new asset to offer for concerts, sponsor events, fan fests or as a media center.

What do you consider your biggest “get” so far?

It really hasn’t been a single event, but it’s the Inglewood stadium (due to open in 2020). No one will be able to eclipse that project, not just in our town, but across the country.

How does L.A.’s status as the world’s entertainment capital factor into the equation for sports bids?

The entertainment industry here really differentiates us from other cities. We have celebrities already living here, so when a sports event comes to town, it can tap into that market to help drive awareness, attendance, attract media attention, and the organizers don’t have to fly talent in. That’s a huge advantage for us. And we know entertainers love sporting events, and athletes love entertainers.

What’s on the front burner these days?

Major League Baseball was in town recently (timed with the Dodgers’ announcement about stadium improvements ahead of next season’s All-Star Game), and we had our first L.A. host committee meeting with about 60 people including representatives from the LAPD, the fire department, department of transportation, the airport, as well as the Dodgers and MLB. We introduced ourselves and explained to MLB what function each of us served and how we could be useful and then connected face to face on what’s needed to put on a successful event.

Where do things stand with Super Bowl preparations?

The NFL is in town for two days for site visits for the 2022 Super Bowl, even though it’s three years out. It’s been quite a long time since the last Super Bowl was here (about 30 years), so we showed them about 15 potential event sites including the new stadium.

What other events are on your radar?

We want to bid on the Women’s World Cup — and it has certainly helped that the U.S. just won it. Since we believe we will be hosting some part of the men’s 2026 event, the women’s event in 2027 would be a great addition, one year later. We are also trying to get an NCAA Final Four — we are looking at maybe 2027 or 2029. We are also looking at bidding on the X Games return (it was hosted by L.A. from 2003 to 2013). We also bid on Wrestlemania 37 (for 2021 in Inglewood) because when we brought the event idea to the mayor’s office, and after they saw how much Wrestlemania does for the community and how the kids have reacted previously to those athletes, they said they were in.