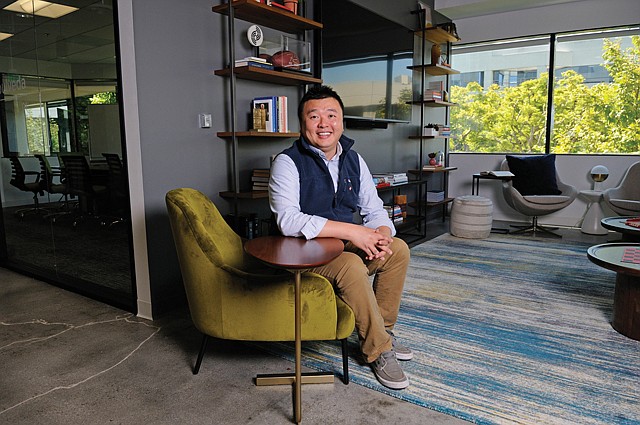 Tim Lee, principal and co-founder with Michael Cho of commercial real estate firm Olive Hill Group, doesn’t say the word “office” when he welcomes visitors to the company’s new workspace. Instead he meets the Business Journal in what he calls the “living room.”

In May, Olive Hill Group moved from its downtown digs to Culver City’s Courtyard campus, which Olive Hill owns, leasing out other office spaces in the complex. Olive Hill also owns commercial buildings in several other areas, including downtown and Santa Monica, often catering to the Silicon Beach tech industry.

The company has coined the term “Workstyle,” a blend of work and lifestyle, to describe the philosophy behind the space it occupies as well as the creative spaces it leases out.

Olive Hill employees are encouraged to take advantage of the complex’s central courtyard, which received a $1.5 million remodel in 2017 to include ample outdoor seating, space for food trucks, a bike share program and a new fitness center.

“It’s not just tech companies that are trying to create more creative spaces, it’s also traditional companies because they need spaces that help attract the right type of young, creative professionals,” Lee said while seated on the “living room” couch in front of a Scrabble set, which he sometimes plays with his 5-year-old daughter.

“We’ll have new tenants or new partners, and this gives them a feel for our culture, which is totally open, transparent and collaborative,” Lee said. “It’s a good chance for them to get a feel right away that I can trust these people to deliver the results they are looking for.”

Like other company employees, the top executives don’t have private offices, although Lee has managed to scatter a few personal items throughout the workspace, including a Seattle Seahawks 2014 Super Bowl football signed by quarterback Russell Wilson.

Lee co-founded the Seattle-area tech startup Pogo Linux Inc. and later served as an attorney for tech startups with Fenwick & West in Seattle. “I always felt when I was a lawyer that being in an office disconnected me from the rest of the office, the rest of the world,” he said. “When I’m here, my goal as a manager is to be present and to be part of the team.” He added that employees are expected to be intense team players at the office, but the company believes in leaving them alone when they are at home or on vacation.

Lee, who grew up in the Bay Area, wanted to move back to California and saw more opportunity for commercial real estate growth in Los Angeles than San Francisco.

Lee said he’s landed on a style of dress between the tech whiz’s hoodie and jeans and the lawyerly suit and tie. “It’s a little bit corporate but still casual and approachable,” he said. “Fortunately, in the business world, (we now) want to reflect who our clients are.”