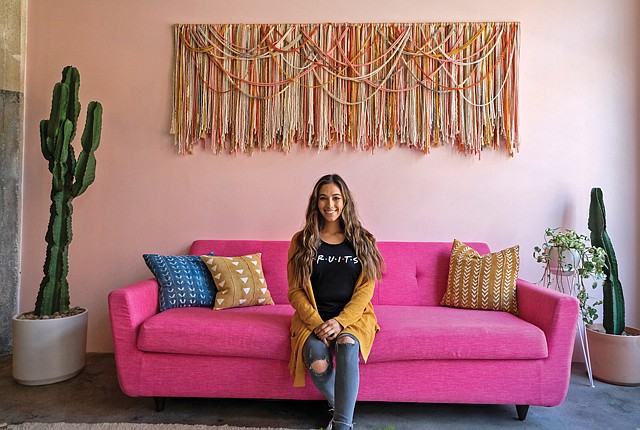 Competition is heating up among coworking operators.

As established players add locations and new providers set up shop, some shared office companies are working to distinguish their brands by offering specialized amenities for specific industries or clientele.

Some have added screening rooms and video-editing facilities to attract media and entertainment clients. A handful of providers are offering shared workspace for women only. And one new operator downtown is building a coworking location tailored specifically to cannabis companies.

“People can get lost in the shuffle at some of the bigger coworking groups,” said Chris Penrose, a first vice president at CBRE Group Inc. “They feel a little bit more at home if they are in an environment where they can collaborate with people in their same industry.”

According to brokerage Jones Lang LaSalle Inc., coworking and flexible space is a major driver of growth in the office market, expanding an average of 23% annually since 2010.

Dominant player WeWork Cos. Inc. has signed 30 leases in L.A. County. WeWork’s local spaces range from 35,000 square feet to well over 100,000 square feet and cater to a wide range of businesses.

But smaller operators are finding they can attract business by tailoring their locations — which can be as small as 5,000 square feet — to a certain segment of the market. They say they’re trying to build a community.

“People like to be surrounded by like-minded individuals,” said Corina Irvin, a director at brokerage Cushman & Wakefield Inc. “They feed off each other’s energies and ideas.”

Specialized coworking locations can also be a good place to make contacts with other businesses and potential clients, brokers and operators said.

“Instead of being in a WeWork with a bunch of companies that don’t do what you do, you can be getting water and run into people who do something similar,” said Jennifer Frisk, a managing director at Newmark Knight Frank.

That’s part of the idea behind 718 S. Hill St., a building opening downtown later this year that will be occupied exclusively by companies in the cannabis industry. Bow West Capital and Green Street Agency are developing the building, which includes coworking.

“We’re putting the companies together,” said Josh Shelton, co-founder of Green Street Agency. “Our goal is to help identify those companies and do the grunt work and put them in one place together, and hopefully they can grow and blossom together.” The building will have two floors dedicated to coworking.

“We wanted to create a space where we could collaborate and inspire people to create content,” she said. The 3,200-square-foot shared office space opened in October 2017.

The workspace is geared toward businesses that are using social media to build their brands, and it’s Instagram friendly — with several different backdrops that clients can use to shoot images of their companies’ products.

“Rather than being an office space, it’s a creative playground,” Rasgon said.

She said she is in talks with investors to expand the concept.

Other coworking brands geared toward women include The Wing in West Hollywood and The Riveter in West L.A.

Cushman & Wakefield’s Irvin said some women “don’t feel as comfortable going to some of the larger coworking companies — some of them are quite masculine and have a bro-ey environment.”

Some brokers said tailoring coworking to specific industries can be a stronger business model in the face of an economic downturn.

“With the coming economic correction, whatever form it takes, there’s a big question on how the global operators will do,” said Jerome Fried, a managing director at Savills Inc. “The more mom and pop and local operators in niche areas are going to have a lot more staying power.”

That includes H Club, a members-only club for people in creative industries, which has a coworking area called H Space, which is available only to members. Burbank-based Digiland offers soundstages and production rooms.

Brokers said they expect to see more coworking options geared toward production companies and others focused on things like health and wellness. Coworking spaces that offer childcare are also gaining interest.

“People will pay a premium for those types of operations,” said Michael Nieman of Savills.