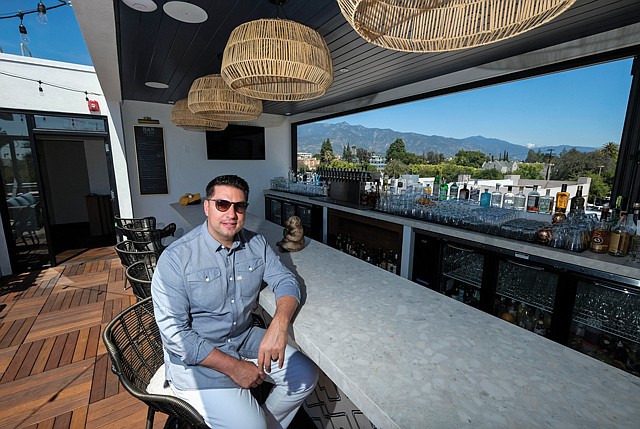 Prime Location: Jonathan Weiss takes in the view from his rooftop bar. Photo by Ringo Chiu.

On a clear spring day, the ocean shimmers in the distance beyond the port cranes in San Pedro. The ice-capped San Gabriel Mountains rise up behind the sprawling cityscape. And a DJ spins low-key electronic music.

Welcome to Los Angeles’ rooftop scene where you can sip $18 martinis poolside or dine and dance under the stars.

Southern California’s year-round mild climate and nearly 300 days of sunshine a year are driving the club and restaurant scene up and out. Developers say it’s more of an investment up front — particularly for existing properties — but rooftop patios are becoming a must-have amenity for hotels, condos, restaurants and bars to draw customers.

“I think just about every one of our clients wants to have some rooftop amenities,” said Scott Hunter, regional director for Dallas-based HKS Architects. But it’s not always easy.

And costs can easily climb as codes require elevators to reach rooftop spaces. At the h.Club, which boasts a full kitchen above the skyline, the firm had to bring in a crane to haul up the commercial kitchen equipment.

The result: a killer Hollywood outlook with views of the iconic Capitol Records building and the Pantages Theatre with its light-up marquee.

“Our customer requires a rooftop,” said Brian De Lowe, co-founder of Proper Hospitality and president of development firm The Kor Group. “It’s key to our brand and the customer experience, and it distinguishes us against other hotel brands.”

The complex and expensive designs can scare away some developers. Proper’s Santa Monica location features trees, firepits and a pool. And downtown, Proper had to add a new elevator to reach the rooftop.

Historic buildings are an even bigger challenge, given the complexities and restoration costs, De Lowe noted.

But he said rooftops typically bring in double the revenue compared to ground-floor operations. “Rooftops are so much more expensive to build. Unless a developer is confident that the rooftop will generate enough profits and/or ancillary benefit to the other uses in the building … developers often shy away,” De Lowe said.

One of the oldest rooftop bars in downtown sits atop the Standard hotel. On a Saturday summer night, it’s not uncommon to glimpse a line to the elevator that takes revelers upstairs. There, they can sit in waterbed cabanas, take a dip in the pool or spread out along deep seats that offer city scape views.

Shanon Ferguson, executive vice president of operations at New York-based Standard International said the rooftop easily attracts up to 1,000 people on a typical Saturday in the summertime when locals and tourists like to bask in the sun.

What draws many of those patrons is the view. “If anyone is opening downtown, if they have the ability to have a rooftop, they are going to do it,” Ferguson said.

That’s something Debra Gerod, a partner at Gruen Associates has seen over the past several years.

Gerod, who hails from Chicago, said it always seemed crazy to her that more clients didn’t ask for rooftop facilities.

Jonathan Weiss, chief executive and founder of Granville, a five-restaurant chain in the Southland, just opened his first rooftop location in Pasadena this month. He calls the rooftop bar the Bar Del Mar, naming it after the street it overlooks. Woven lamp shades over the bar give it a beachy vibe, and there are fans and a small firepit. But for patrons, the real money shot is found on a stool at the bar. From there, a window frames the San Gabriel Mountains, and on a clear day it almost feels like they are within reach.

“There were no other rooftops that I knew of in Pasadena, and that’s something that struck a chord with me,” he said.

Granville remodeled a former pop-up furniture store, converting it from a single story to two stories by adding a mezzanine and then a rooftop restaurant. The rooftop raised costs by about 20% to 30%, he said, in part because it required adding an elevator and multiple exits.

“It was a considerable investment but well worth it,” Weiss said.

CORRECTION: The original version of this story misstated the names of Proper Hospitality and The Kor Group. The story mischaracterized Brian de Lowe’s role at The Kor Group; he is the company’s president. The article also incorrectly reported the number of pools at Proper Hotel in Santa Monica. It will have one pool.