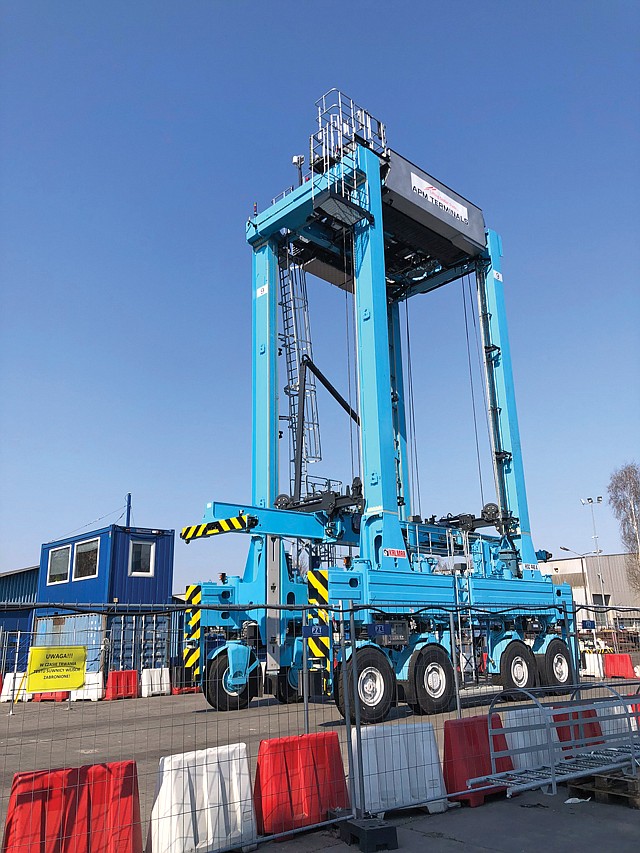 A skirmish pitting human workers against advanced machinery at the Port of Los Angeles was put on hold last week — but the larger battle over automation at Southern California’s ports continues to rage.

On April 15, the Los Angeles Board of Harbor Commissioners for the second time delayed voting on a permit that would allow port terminal operator APM Terminals to replace the manned lifts and shovel trucks that stack cargo containers with electric, self-guided vehicles.

APM Terminals’ parent company, Danish shipping and oil conglomerate A.P. Moller-Maersk, wants to automate its facility at the Port of Los Angeles — an initiative the company maintains is essential to stay competitive.

But a larger fight has erupted over the fate of port workers writ large as shipping companies and terminal operators race to find ways to increase efficiency, reduce labor costs and — of particular import for Southern California — comply with strict air-quality regulations.

“Everyone is watching to see how L.A. is handling this issue,” said Tom Boyd, a spokesman for APM Terminals. “Every other port in the world wants to pick up more cargo.”

Boyd said he thinks automation will help fend off those competitors.

“This is a long-term issue in terms of competitiveness,” he said.

The dockworker’s International Longshore and Warehouse Union estimates APM Terminals’ automation efforts would cost them around 700 jobs at the port, and it’s opposing the move. Large-scale protests, organized by the union, have drawn legislators and other workers to the cause.

“We are fighting absolutely for port jobs, but the issue of job impact, economic impact is much bigger when you look at the entire workforce,” said Ray Familathe, president of ILWU Local 13, which represents dockworkers at the ports of Los Angeles and Long Beach.

The ports each have one automated terminal already. The largest of the two, the $1.5 billion Long Beach Container Terminal, operates with 30% of the workforce that a conventional terminal does, according to a union estimate. The union is especially concerned about automation at Pier 400 because it’s the busiest of L.A.’s terminals.

Automation could soon be the norm at ports, according to a report released in November by New York-based consulting firm McKinsey & Co. Inc. The report projects terminal operators will spend $10 billion to $15 billion over the next five years on automation. Almost 40 ports around the world have fully or partly automated terminals, about half of which were completed in the past six years

A report commissioned by the Pacific Maritime Association — a group that represents shipping lines and terminal operators on the West Coast — found that Los Angeles has lost market share to East Coast ports since 2002. Maritime analyst John Martin, who co-authored the report released last week, said companies have diversified their supply chain operations to move more cargo through East Coast ports in response to labor unrest on the West Coast. Companies also face higher costs to move cargo through Southern California, Martin said, because of property costs, strict environmental standards, fees and other regulations. Automation, coupled with electrification is a way to reverse that trend, he said.

But the initial returns on port automation have been less than stellar. The McKinsey report found productivity at automated ports fell 7% to 15%, and return on investment proved poor, according to shippers, analysts, operators and other high-level port executives surveyed by McKinsey.

Geraldine Knatz, who was executive director of the Port of Los Angeles when the first terminal there added automated equipment, said her team vowed never to spend that much money again. The terminal cost the port $500 million.

“We wanted one of the first automated terminals on the West Coast,” she said. “One of the big wake-up calls was the cost of automation. When we looked into it and the electrical power upgrades, it turned out to be much more than originally planned.”

Rise of the machines

But the future may be different.

While costs to outfit terminals for automation remain high, the technology is expected to become more efficient. Artificial intelligence and supply chain technology that connects infrastructure for better cargo planning could change the landscape.

Boyd said Southern California’s two automated terminals have what’s known in the industry as the fastest “turnaround times” — the amount of time it takes a truck driver to pick up a container from a terminal.

The automation in use is limited, and human intervention is still needed at points along the process. But that’s changing, too.

Unlike older equipment from the Finnish company Kalmar Inc., a subsidiary of Cargotec Solutions, the new vehicles proposed for the 484-acre APM terminal are fully automated, requiring little help from workers.

Kalmar, which claims to have 60% of the global straddle and shuttle carriers market, has a growing presence at the San Pedro ports — and globally. The company’s orders jumped 23% in 2018, according to its year-end financial report.

“The simple truth is the steamship lines need to reduce costs and gain steady production of the ship unloading process,” said Jason Gasparik, director of U.S. sales for Kalmar, in an emailed statement.

The shift toward fully autonomous machinery is worrisome for labor leaders.

“Now, we are getting to the point where there is technology and no human intervention and machines talking to machines,” Familathe said. “Every industry is automating in some fashion or the other.”