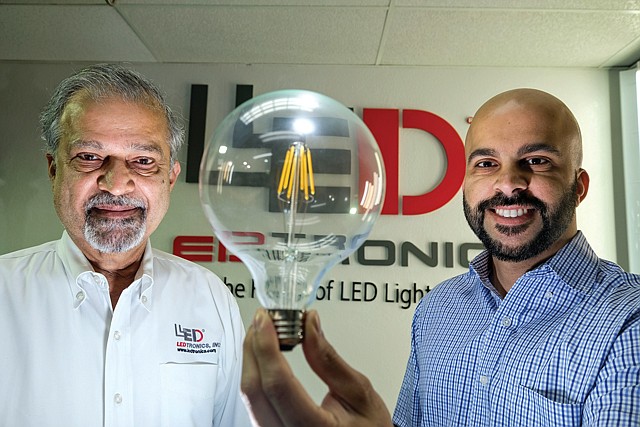 When Pakistani immigrant Pervaiz Lodhie founded LEDtronics Inc. in Torrance in 1982, most people only knew about LED lights in their pocket calculators, digital watches and on some instrument panel displays.

Today, LEDs — short for light emitting diodes — dominate store shelves at Home Depot and are quickly becoming standard lighting for homes and workplaces. LED bulbs often last 10 years or longer, use less than 20% of the energy of an incandescent bulb and have recently dropped so much in price that a pack of two standard 60-watt equivalent LED bulbs retails for around $10, less than half what they cost several years ago.

Yet as the consumer LED market has exploded, LEDtronics stayed with the same niche market it has plied for more than 35 years: the commercial and industrial sector. Private, family-owned LEDtronics now specializes in customized LED lighting for manufacturers, Fortune 500 companies and some mass transit operations.

LEDtronics has survived even as many LED light manufacturers have flamed out or been bought up by lighting industry giants, such as Boston-based General Electric Co. or Osram Sylvania Inc. of Wilmington, Mass.

But because of LEDtronics’ niche focus, revenues have remained modest — generally just over $10 million a year. For 2018, revenue was roughly $12 million, substantially less than the $19 million the company reported for 2000.

LEDtronics’ payroll too has shrunk to about 180 at factories in Torrance and Karachi, Pakistan, from a high of about 300 in 2000.

Lodhie, now 75, said the company was hurt for much of the last decade by weakness in the manufacturing sector. Because LEDs last so long, the company’s revenue growth comes mostly from new lighting installations, which depend on manufacturers’ expansion plans. During and after the Great Recession, manufacturers scaled back their operations.

Revenue from manufacturers, he said, has picked up slightly over the past year, and the company is now projecting 2019 revenue between $13 million and $14 million — a year-over-year increase of 8% to 17%.

Even as revenue from LEDtronics’ manufacturing clientele stagnated or declined, Lodhie said he chose to stay out of the rapidly growing mass market for LED bulbs. “I left the consumer and Home Depot and Lowe’s market alone, mostly because it was high-volume, low-profit margin work that we weren’t equipped to handle,” he said.

In the last couple of years, Lodhie said he has tried to shift LEDtronics onto a faster growth track. The company has focused on educating distributors about advancements in LED technology. Improvements in the semiconductor chips underlying LEDs have led to increasing brightness, different types of light and increased programming capability, such as ambient light sensors.

“We’ve been putting out more information updates on LED technology to our distributors, and that has resulted in more sales,” he said.

Saunders said that for 20 years, C&R has relied on traditional metal halide lighting for its 50,000-square-foot factory floor, which houses up to 30 welders and machine tool-makers. But over time, ballast failure rates increased, and lighting quality and efficiency decreased. Four years ago, the company decided to upgrade the floor lighting, and that’s when LEDtronics told them about the advantages of LEDs.

“We never even considered LED lighting because the upfront cost was too expensive,” Saunders said. “But by this time, the cost had come down enough that it was in the affordability range for us, especially when rebates from our local utility were taken into consideration.”

Even though the LED lights were about double the price of new fluorescent lighting, Saunders said that in the two years since LED lights were installed, the company has recouped its cost and then some.

“Our electricity bill is down about 25%, and we’ve had absolutely no repairs — not one failed light,” he said. “And there are unexpected benefits: the lighting intensity is about double what it used to be, so our workers see better and can therefore perform better.”

Saunders said the company has also installed LEDs in its office space and that the next step is to convert all the company’s outdoor lighting to LEDs.

Closer to home, LEDtronics lighting has found its way into an office building in Torrance owned by Zubair Rao and his Azrao Investment real estate company.

Rao said that with about 80% of the office building’s lighting converted to LEDtronics so far, his electricity bill has dropped to about $250 per month from $750 per month with traditional fluorescent lighting.

“It’s not just that the LED lights use less energy, they are also brighter over a wider area, which means I’ve been able to reduce the number of light fixtures significantly,” Rao said.

As the technology improves, LEDtronics is looking for new ways to grow the business. For the first time in its 37-year history, the company is now working to add a sector to its client roster — mass transit operators such as Amtrak and commuter rail companies.

Lodhie said LEDtronics has spent the last three years working with Washington, D.C.-based National Railroad Passenger Corp., better known as Amtrak, and other rail companies to develop consistent lighting standards for the use of LEDs inside rail cars, along portions of railroad tracks and in railyards. An Amtrak spokesman declined to comment for this story.

Looking ahead, one lighting industry expert said that for LEDtronics to survive, it will have to adapt to two big technological changes beginning to sweep through the LED marketplace: the increased connectivity of LED lighting with other home and workplace devices — so-called “smart home” technology — and the expanded variety of LED lighting itself.

“With LED lighting, you are no longer confined to the standard light bulb shape with the two or three types of light we’ve all grown up with,” said Michael Siminovitch, director of the California Lighting Technology Center at UC Davis. “We’re only now just beginning to see the true capabilities of LED lighting.”

LEDtronics is incorporating this into its recent product offerings, according to Chief Operating Officer Shaan Lodhie, the son of Pervaiz Lodhie and next in line to run the company. “We are selling tunable flat LED panels that the user can adjust the light color, intensity and wattage, and we are also selling programmable LED lights with built-in motion sensors that can be controlled remotely,” the younger Lodhie said.