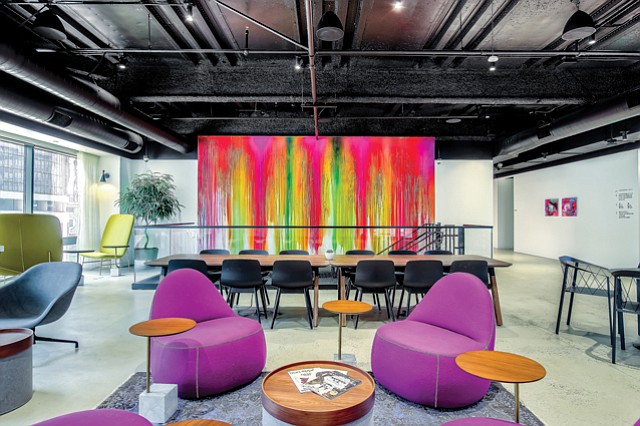 Brookfield worked with amenities firm Convene to create this space in the Wells Fargo Tower at 333 S Grand Ave.

Office landlords and developers are investing tens of millions of dollars in luxury amenities to attract and retain tenants who see perks as a way to recruit and keep employees.

It’s an attempt to spice up the corporate office environment in an age of low unemployment, telecommuting, shortened attention spans and younger workers who want a luxury work environment and a paycheck, according to some L.A. brokers and developers.

This isn’t the first try at redefining the workplace, but the latest round of upgrades and offerings goes beyond open office environments and flexible work spaces. It’s not unheard of for office concierges to plan birthday parties for tenants’ children, pick up dry cleaning or arrange for therapy dogs to show up at the office.

“Back in the day – a year ago – people thought a food truck was enough,” said Ryan Harding, an executive managing director at Newmark Knight Frank. 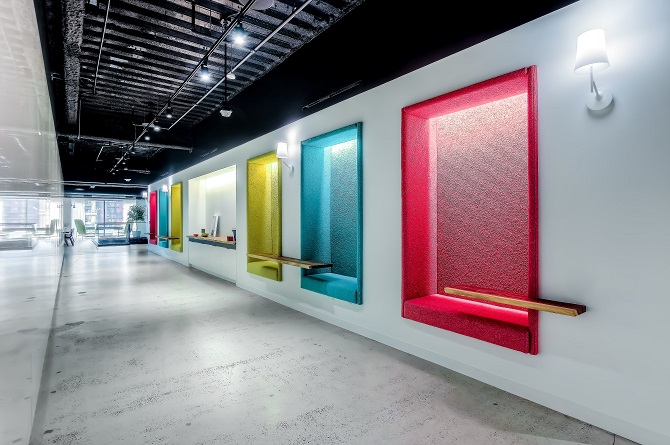 Brookfield is stripping the property’s old food court and spending $60 million to create Halo − 13,000 square feet of food and beverage space, a meditation area, meeting rooms, another Convene lounge and an outdoor bar.

A similar space – what Brookfield Executive Vice President Bert Dezzutti called “a club-like environment” – will soon be unveiled at the Figueroa at Wilshire building at 601 S. Figueroa St., another property the company owns.

The push to outfit properties with high-end amenities came as employees seem to want more practical offerings, according to a recent study by CBRE Group Inc.

Parking topped the list of amenities ranked in order of importance to tenants in the CBRE study. Conference centers and wellness facilities, such as fitness centers, cafeterias and coffee bars rank near the top of the list of office tenant priorities. More exotic or unusual athletic offerings in an office setting haven’t been as successful, according to one broker.

“I don’t think people who are going into the workplace are wanting to play bocce or go putt,” said Tom Sheets, an executive managing director at Cushman & Wakefield.

It is unclear so far whether the new amenities at the Wells Fargo tower have influenced tenants’ to stay put.

“The firm’s lease expires in 2022, and we haven’t decided whether to stay or leave,” said Pearl Piatt, chief communications officer at the law firm Gibson Dunn & Crutcher, a Wells Fargo Center tenant. “We’re exploring our options.”

When asked if any specific tenants have signed leases because of these amenities, Dezzutti replied in an email, “We’re confident our tenants value the amenity offerings we provide in our projects.”

He declined to elaborate.

It is the tenants, however, who will ultimately bear the cost, according to Cushman & Wakefield’s Sheets.

“These are all costs that ultimately are passed on to the tenants,” he said.

Dezzutti declined to say whether lease rates would increase for tenants at the Wells Fargo Tower as a result of the $60 million amenities upgrade. He did say the new offerings would attract more tenants and keep them for longer.

“Projects that are amenity-rich tend to lease up more quickly and retain their tenant base more successfully,” he said. “We think it leads to greater absorption of office space in our projects.”

“If you’re not pursuing these types of environmental changes you will become uncompetitive very quickly in this environment,” he added.

Today’s amenities arms race dates from the rise of technology giants, such as Facebook Inc., Apple Inc. and Alphabet Inc. subsidiary Google, which offered employees arcade games, free cooking classes, on-site gyms and free shuttles to and from work, among other workplace incentives.

Word of these perks has filtered out, changing attitudes and expectations among traditionally more conservative, buttoned-down businesses.

“The reality is even law firms and financial firms are starting to change their aesthetic of places,” said Louise Sharp, a principal at HLW International, a New York-based architectural services firm.

The upgrades are also driven by low unemployment rates, which force employers to work harder for talent. Los Angeles County’s jobless rate was 5.1 percent in July, coming off a decades-low 4 percent in May, according to the Federal Reserve Bank of St. Louis.

Employers’ need to attract millennials – defined as people born between 1981 and 1996 – is frequently cited by real estate professionals as another a reason for these upgrades. Millennials are now the largest U.S. labor force participants at 35 percent, according to an April study by the Washington, D.C.-based think tank Pew Research Center.

“Younger workers have fewer formalized constraints,” said Brookfield’s Dezzutti. “They want to (work) in a variety of environments, not just at their desk.”

Even the government is getting into the amenities act. The U.S. General Services Administration is leasing 154,000 square feet at a recently redeveloped office campus at 777 S. Aviation Blvd. in El Segundo, owned by New York-based developer Westbrook Partners and Embarcadero Capital Partners, of Belmont. The site offers a dog park, a bike sharing program, food truck stations and a fitness center with a locker room and showers, among other amenities. The General Services Administration specifically cited amenities as part of an effort attract younger workers, according to the building’s owners at a launch party earlier this year.

Across the street from Brookfield’s Wells Fargo Center on downtown’s Bunker Hill, downtown-based developer Rising Realty Partners has spruced up One California Plaza at 300 S. Grand Ave. with a rooftop deck and dozens of shops and restaurants, among other features. The Art Deco CalEdison building at 601 W. 5th St. has been updated with Wi-Fi, a coffee bar from Portland, Ore.-based Nossa Familia Coffee, converted its upper floors to creative office space and is working on getting a liquor license for the structure.

“We have changed from where we were a few years ago when things were novelties like a gym in a building or restaurants that aren’t just chain restaurants or coffee shops,” said Christopher Rising, president of Rising Realty Partners. “People are really competing to create these experiences for tenants far beyond what people used to do.”