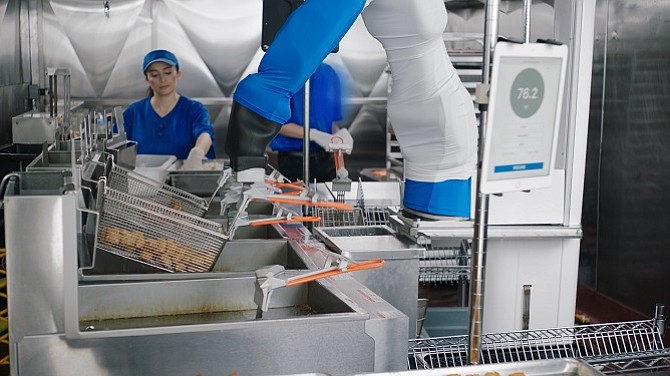 A Pasadena robotics and artificial intelligence outfit that’s been using a robot to fry chicken tenders at Dodger Stadium just gave the bots an upgrade to include the frying skill.

Flippy, the Miso Robotics automaton, has been assisting human employees at the Chick ‘n Tots stand at Dodger Stadium since a pilot program began July 30, and is expected to do so for the remainder of the Los Angeles Dodgers’ 2018 season. The robot also recently received an ETL Listed Mark from Intertek, a London firm which independently tests and evaluates products for compliance to North American safety standards.

Miso Robotics is a company incubated by Cali Group, parent company of CaliBurger. The Flippy robot first got its start in March 2018 at a CaliBurger location in Pasadena, and was developed by Miso in partnership with Chicago-based Levy Restaurants (a subsidiary of Compass Group USA Inc.) and Levy’s subsidiary E15 Group. The company boasts a roster of engineers and industrial designers from California Institute of Technology, ArtCenter College of Design, Tesla Inc., Space Exploration Technologies Corp., and UCLA, to name a few locals.

“The robotic kitchen assistant helps us more quickly and safely cook perfectly crispy chicken tenders and tater tots,” said Robin Rosenberg, vice president and for Levy Restaurants, which operates catering at Dodger Stadium. “It’s amazing to see the kitchen assistant and team members working together, and the consistency of product is incredible."

Flippy uses a six-axis industrial arm to “properly identify and locate food, cookware and cooking utensils,” while its “Miso serve” AI “equips it to make optimal cooking decisions in real-time.” Another AI platform feature called “Miso move” is designed for “provides robotics control for safe and efficient grilling, frying and preparing food as assigned.” With these skills combined, Flippy can pick up fry baskets, shake them in oil, and then monitor cooking time.