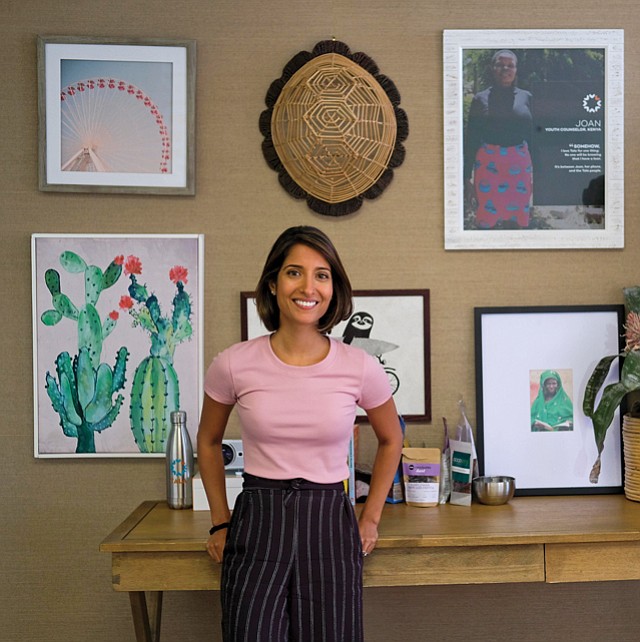 The decades-old practice of microlending mixes with the new methodology and speed of financial technology at Tala.

The Santa Monica-based firm has employed technology from the smartphone revolution to meet its goal of providing loans of $500 or less to people without credit scores or any sort of recorded financial identity.

The idea came to the company’s founder and chief executive, Shivani Siroya, when she worked from 2006 to 2008 as a financial analyst with the United Nations Population Fund, an agency that promotes family planning in more than 100 countries.

She interviewed more than 3,500 people in west Africa and sub-Saharan Africa during her tenure, including some who lacked a financial identity despite a lifetime of hard work.

“The foundations of the financial system in emerging markets (for the poor) didn’t exist,” Siroya said.

Tala started in 2013, and doesn’t disclose revenue or profits. Siroya said it has made $300 million in loans to nearly 2 million customers from developing nations such as Kenya, the Philippines and Tanzania in the past five years.

Tip of the app

Financial technology, or fintech, aims to streamline financial services processes via mobile banking, investing services and other technological advances. Microlending is the act of lending small amounts of money to borrowers in the developing world.

Some offer loans at relatively low interest rates. Others, such as Tala, are more market oriented, with risk-based rates that average around 5 percent weekly or monthly terms.

Most microfinance borrowers are women living in rural areas – up to 84 percent in 2016, according to BNP Paribas, a major French bank.

The credit identity is generated by the customer’s smartphone data on text messages and calls, overall app usage and scores of other data points. People in developing markets are more likely to get proof of payment via text message instead of email, Siroya said. Tala’s app examines data points and evaluates whether the customers are consistent with their bill payments.

The app also examines how many calls the customer makes throughout the day. The greater number of contacts and the more consistent times of calling, the more creditworthy the borrower.

Customers also answer up to 10 questions about whether they have loans outstanding and the amount of money they get paid annually or weekly.

“It’s not something that requires three years’ worth of history,” she added. “Your current actions today speak volumes.”

Tala grants loans between $10 and $500 – typical loans are around $70 – to their customers’ mobile wallets with interest on the loans ranging between 5 percent and 11 percent per week or month on the company’s risk-based pricing system, Siroya said. Tala imposes neither origination fees nor penalty fees, she said. The repayment rate is 92 percent, Siroya said. That’s just short of the overall global repayment rate in 2016 of nearly 99 percent among international microloan borrowers as reported by Opportunity International, a Chicago-based nonprofit.

The repayment rate on U.S. Small Business Administration Loans averaged about 77 percent between 2006 and 2015, according to the agency.

Siroya estimates that 70 percent of Tala’s customer – the company typically gets business by digital advertising and word of mouth – use their loans for working capital, such as hiring employees for their businesses or adding to their business inventory.

Tala raised $50 million Series C equity investment led in April by Revolution Growth in Washington, D.C.-based. Another $15 million investment came from undisclosed investors. The company has raised more than $105 million since its founding in 2013.

The $65 million Tala raised in April helped it move into the Mexico and India markets. The company already operates in the Philippines, Kenya and Tanzania.

Tala employs 275 workers globally – and 110 of them are based in its Santa Monica headquarters. Its other offices are in Mexico City, Mumbai, Nairobi and elsewhere.

One of Tala’s early investors was BAM Ventures, a Westside-based venture capital firm, which pumped $100,000 into Tala during the company’s early days.

Siroya’s background in finance and her work at the United Nations was attractive to the BAM executives, some of whom are immigrants to the United States, coming from places where cash is still the dominant form of daily financial transactions.

“We understand the concept of credit in other countries is very different than it exists here,” said Shamin Walsh, managing director at BAM Ventures. “The idea of buying a $4 Starbucks latte on your credit card doesn’t exist there.”

Despite her finance background, Siroya finds her current role surprising.

“I never thought I was going to start a company,” she said.

Microlending’s modern era began during the 1970s when Muhammad Yunus, a professor at University of Chittagong in Bangladesh began a research project to design a credit delivery system for that nation’s rural poor. Yunus’s project led to the founding of Grameen Bank, a Bangladesh-based microlending organization. Yunus and Grameen Bank were awarded the Nobel Peace Prize for the development of microlending in 2006.

There were 139 million customers at microlending institutions globally by the end of 2017, with loans totaling around $114 billion, according to a study by Convergences, a Paris-based think tank. The number of borrowers grew 5.6 percent year over year while the total loan portfolio grew 15.6 percent.

India led the way with 51 million borrowers and about $17.1 billion in loans outstanding.

“It’s sustainable,” said Erica Marie Field, an economics professor at Duke University. “It’s not something that needs to be subsidized.”

Field has studied the effects of microfinance on women, the majority of borrowers, and households in India and elsewhere in South Asia, and said there is evidence that microlending can be “transformational” to rural customers, though less so in urban areas.

Field described microlending as neither risky nor costly, and said it is meeting market needs, but also cautioned that the practice has its limits.

“It’s a little naïve to expect us to think it will (end poverty),” she said.